The Social Life of Information

Have you ever been in an airline lounge so crowded that you couldn’t avoid overhearing people in a loud, spirited, and arcane critique of wrong-headed colleagues? That’s the flavor of much of this book: hearing one side of an argument among information industry professionals.

This is unfortunate, because the book’s potential audience includes everyone who builds or manages an organization in which information is a critical component. The authors’ frequent shrillness is their way of making sure that we listen to them rather than to their tunnel-visioned colleagues. If we are willing to endure the bluster, we will find an important message: “For all information’s independence and extent, it is people in their communities, organizations, and institutions who ultimately decide what it all means and why it matters.” 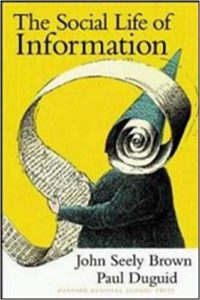 In The Social Life of Information, John Seely Brown, chief scientist at Xerox Corporation and director of its Palo Alto Research Center, and Paul Duguid, a research specialist in social and cultural studies at the University of California at Berkeley, illustrate how “the language of information and technology can blind people to social and institutional issues.” In particular, they assess a wide range of claims frequently made for new information technology by testing them against common human dimensions.

One frequent claim is that new electronic resources will replace older forms of common activities such as shopping. But human issues of trust, service, and tastes pose important barriers to substituting the electronic for the personal. The authors illustrate with Amazon.com, which adopted the retail bookseller’s practice of posting staff book recommendations. However, when customers found out that many of Amazon’s “recommendations” were really publisher-paid endorsements, their trust evaporated. Instead of replacing retail book stores, Amazon and its electronic colleagues merely complement them, offering a convenient way to order books you want, not to discover books you didn’t know you wanted.

The authors juxtapose basic insights into how people actually converse, negotiate, transact, and delegate with the claims of “infoenthusiasts” who would accomplish the same things electronically. Many seemingly impersonal electronic applications still retain an all-too-human dimension. For instance, companies that developed ways to make secure and private cash transactions over the Internet, even transactions involving only pennies, failed in the 1990s, not because their encryption wasn’t secure enough, but because the human links at each end of the transaction weren’t. Instead of undermining banks and brokerages, this vaunted “killer application” demonstrated that bankers and brokers offer value, including judgments about when to not follow the rules, no matter how efficient their electronic competitors.

A more complex example involves claims that information technology can replace or extend higher education institutions and practices. Brown and Duguid challenge these claims with an important insight that applies to other institutions: A college degree “misrepresents” as well as represents a bundle of human attributes that society trusts. That is, a college education has many attributes that society has not specifically asked for, such as developing intellectual curiosity, but that combine with competencies society requests to deliver a package that it values.

People benefit from serendipitous encounters with information, whether it’s an unanticipated conversation in a hallway, a headline adjacent to a story they follow that alerts them to news they would not have preselected, or a course with an interesting title offered at an appealing time slot. No one can describe in advance all they want to know or arrange confrontations with information they’d rather not know but will come to appreciate. Most of all, as Brown and Duguid demonstrate, they benefit from other people, whether as mentors, guides, or peers. Unbundling a college degree into discrete electronic deliveries of information in an “unplug-and-pay” model of higher education would impoverish learning in unexpected ways.

The authors recount how technology-driven changes in the workplace can destabilize work as well as enhance it. The advertising firm Chiat/Day’s attempt to use technology to rethink work offers an extended example. The firm designed its new offices around the principle of “hot desking,” hoping to enhance its well-known creativity. It asked each employee to check out a phone and computer for a new desk each day, without taking into account the disruption this would create for an array of simple material needs, such as stacking papers in a meaningful order. It allocated seating according to when people arrived at work, without taking into account the incidental learning that comes from repeated contact with a few adjacent coworkers. The employees rebelled, refusing to turn in equipment that they had personalized to help them work better and fighting over spaces adjacent to people who could help them or whom they could help. In short, “infoenthusiasts” have had an idealized concept of how people actually work: They think people are lagging in adapting to technology, but it is technology that is lagging in adapting to people.

People who are setting directions for technology within a people-based organization can benefit from Brown and Duguid’s analysis of process reengineering and its willful ignorance of actual and necessary employee practices. As executives of knowledge-intensive organizations have learned, reengineering works well with tasks such as procurement that are largely vertical, but not with those that require horizontal coordination. The authors also point out something outsiders rarely see when they diagram a process: the valuable help provided by colleagues when carefully mapped processes inevitably go awry; when the ideal meets the real.

Every experienced user of information technology has had new software crash into puzzling “error” messages and found that neither manual nor help desk even mention the problem, let alone provide an answer. Usually, trial and error with a knowledgeable neighbor or a clever child is the solution.

Knowledge embodied in people, not in “information,” is the key. The authors remind us that communities are important for knowledge workers, whether in the form of mentoring, networks, or the person at the next desk. Moreover, different communities have different values, engendered by different practices that resist a homogenizing, technology-based organizational structure.

Geographic networks of practice are also important, particularly when it comes to fostering or rejecting innovation within an organization. Brown and Duguid offer the example of Apple, the company “down the road” that benefited from Xerox’s inability to absorb the graphic user interface innovation that its employees had developed. If an organization’s management is unable to merge a new activity or new way of doing business into its existing practices, the employees who value it will find someplace else to put their ideas into practice. Geographic contiguity is one aspect of the ecology of organizations that allows information that is lying dormant in one place to “leak” to another nearby where it will be put to use.

Finally, the authors puncture the well-known promise of a paperless society. Paper documents have many capabilities that people value. Again, trust is one of them. Colleagues’ marginal comments on a well-thumbed document can inspire confidence that a clean presentation delivered electronically cannot.

Yet the wide-ranging historical discussion of paper documents exemplifies a fundamental flaw in the authors’ approach. They identify the human aspects that information technology can’t replace, rather than investigate what people really need and want. They observe people not to discover their needs and wants but to find out how to insert information technology successfully into their lives. In political terms, people are their object, not their subject; in business terms, they are selling, not marketing. That is their prerogative, but a focus on what people want, rather than on what the new technology lacks, could have carried their analysis in new directions instead of reaching the simple conclusion that the old tools have value.

For instance, in my experience, the proportion of people who use the new information tools to make decisions is relatively small. Queries to readers of American Demographics found that they were most likely to use demographic data to build a case for doing what they wanted to do–say, to fill in the blanks to get the loan–not to decide whether to do it. Similarly, most people prefer to work in ways they feel comfortable with rather than in ways identified as efficient or rational. A colleague once spent hours presenting an information-laden way of designing inventories to the chief executive of one of the world’s largest liquor distributors, only to have the man tell him, “I understand what you’re proposing, but I don’t want to do business that way.” Sending sales representatives to chat with storeowners was a business practice he liked. And it provided the information he wanted, including subjective information about the premises and the retailers that the objective customer database did not possess.

But the traditional ways of doing business are not always completely satisfactory, and managers are attracted to infotech innovations because they believe that there might be a better way. Brown and Duguid show how the high-tech solutions often fail to do the job. Perhaps they should now help their infoenthusiast colleagues talk to people about tasks they want to perform better and then work with them in using information technology to make the good old ways better.