The protection of nature is a goal easier to embrace than to explain. If by “nature” we mean everything in the universe—all that is bound by the laws of physics—then our protection of nature is not required. Since we cannot perform miracles, our actions are as natural and fit as much into nature’s design or plan as the behavior of any object or organism. The opposite of nature in this sense is the supernatural, defined as anything to which the laws of nature do not apply.

However, if by “nature” we mean the opposite of culture; that is, everything that is independent of and unaffected by human agency, then by definition every human action must alter nature and therefore disrupt the natural world. If nature’s spontaneous course is best, everything we do (wearing clothes, taking medicine, planting crops, or building homes) cannot make nature better and must inevitably make it worse. The only way we can protect nature is by leaving it alone or, if that is impossible, protecting its essential principles or design. But does nature so defined have some inherent order or organizing principle that can be identified, understood, and protected? 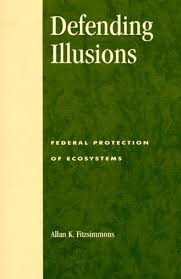 In Defending Illusions, Allan Fitzsimmons, an environmental consultant, argues persuasively that nature in this sense, above the level of the organism, possesses neither organizing principles nor emergent qualities that biologists can study. It has no health or integrity for humans to respect. The only laws or principles in nature are those that apply to everything and that human beings cannot help but obey.

Those who call for the protection of nature, however, do not seek either to permit or to enjoin all human activity. Rather, they generally believe that nature provides a model—exhibits an order or follows principles—that is often disrupted or flouted by human beings in their pursuit of economic gain. But what is this design? What are these rules? Is there anything that can be objectively and scientifically identified so that we know what we are protecting? Or do these “laws of nature” simply represent an individual’s or group’s perception of what ought to be?

Historically, racists, sexists, and tyrants of all sorts have invoked conceptions of nature or of the natural to condemn whatever they happened to oppose. Fitzsimmons believes that environmentalists who appeal to the notion of the ecosystem similarly misrepresent their own preferences as those of Mother Nature. Because science must speak in secular terms, it refers to ecosystems instead of to Mother Nature or to Creation and ascribes design to ecosystems without any mention of the Designer. This conception of nature as orderly, however, derives not from any empirical evidence but from assumptions and beliefs that are essentially romantic or theological.

Fitzsimmons quotes Jack Ward Thomas, the first chief of the U.S. Forest Service in the Clinton administration: “I promise you I can do anything you want to do by saying it is ecosystem management … But right now it’s incredibly nebulous.” The utter nebulousness—indeed, vacuity—of the ecosystem concept accounts for its amazing prominence in environmental policy and planning, because researchers can absorb any amount of funding in trying to understand concepts such as ecosystem health, integrity, and stability. These concepts, Fitzsimmons argues, will always mean what anybody wants them to mean and thus will only add confusion to the already impossible goal of keeping nature free of human influence.

Fitzsimmons also quotes environmental scientists such as Oregon State University professor Jane Lubchenco, who concedes that the goal of sustaining ecosystems “is difficult to translate into specific objectives” in practice. He adds that “no amount of training—theological or ecological—can give substance to such notions as ‘the integrity, stability, and beauty of the biotic community.'” This does not imply, however, that Fitzsimmons opposes well-defined efforts to provide green space, protect wetlands, add to the nation’s parklands, preserve endangered species, and so on. Rather, he argues that vague imperatives implied in theories of ecosystem management provide no clear goals and offer no way to measure progress in these efforts.

Fitzsimmons recognizes that many, perhaps most, ecologists are themselves dubious about the ecosystem concept and aware of the religious aura that surrounds it. He quotes well-respected ecologists, such as Simon Levin and R. V. O’Neill, who concede that the idea of the ecosystem represents “just an arbitrary subdivision of a continuous gradation of local species assemblages” or “merely . . . localized, transient experiment[s] in species interaction.” However, as the ecosystem concept loses its credibility with scientists, it gains cachet with those who write about resource and environmental policy. For them, its plasticity is an advantage. But Fitzsimmons makes a compelling case that this emperor has no clothes; that the popular notion of ecosystem management merely encloses a puzzle within an enigma within a mystery.

Fitzsimmons cites other authorities to support his argument. The National Research Council (NRC), for example, has found that “there are currently no broadly accepted classification schemes for … ecological units above the level of species.” The conclusion would seem to follow, though the NRC does not necessarily draw it, that no nonarbitrary way exists to delimit ecosystems, define them, or re-identify them through time and change. Since no criteria hold for identifying “the same ecosystem” through the continual flux of nature, no basis can be given for determining if and when an ecosystem has been preserved or destroyed. Whether an ecosystem shows its “resilience” by surviving a change or its “fragility” by becoming a different system depends entirely on the observer. Fitzsimmons concludes that no general rules or principles “give scholars a substantive foundation on which to place ideas such as sustainability, health, and integrity.”

To his credit, Fitzsimmons does not belabor the by now completely discredited conception of the balance of nature: the once popular notion that ecosystems display a strategy of development replete with homeostasis, feedback mechanisms, and equilibria directed toward achieving as large and diverse an organic structure as possible. Ecologists such as Steward Pickett, Frank Egerton, and Dan Botkin have thoroughly debunked the attribution of any such organizing principle or design to nature above the level of the organism. Fitzsimmons moves on to debunk attempts to attach an economic value or price to nature’s “services,” pointing out that although it might be possible to measure the economic effect of particular marginal changes in nature, it is not possible to assign an economic value to nature’s services as a whole.

This well-argued and meticulously footnoted critique makes the case against ecosystem management without proposing a different science, such as microeconomic analysis, as a basis for policy. Instead, Fitzsimmons calls for more representative and deliberative political institutions and more efficient markets with incentives to protect the environment. Unfortunately, in the single chapter he devotes to providing an alternative to the ecosystem approach, Fitzsimmons adds little to already familiar arguments associated with “free market” environmentalism. He joins many commentators, such as Terry Anderson and Richard Stroup of the Political Economy Research Center, in rejecting command and control regulations and in advocating greater reliance on decentralized market forces grounded on property rights.

Fitzsimmons persuasively reveals the intellectual dishonesty that uses fictions about nature to lend scientific credibility to what are essentially cultural, religious, or moral norms, but he fails to take the next step of trying to explain the powerful hold these cultural and religious ideas exert on our public consciousness. Rather than scientizing these enormously important ideals, as ecologists do, or debunking them, as Fitzsimmons does, we should seek to understand them in their own terms. We may then find that the ethical and cultural commitments that underlie environmental policy cannot fully be understood, and therefore cannot be supported or criticized, simply in ecological or economic terms.