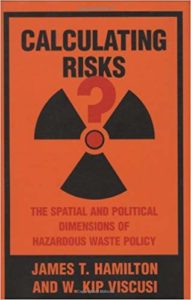 In Calculating Risks, James Hamilton and Kip Viscusi apply sophisticated statistical techniques to information on contaminated sites to try to evaluate the effectiveness of the nation’s Superfund program. To accomplish this, they and a bevy of researchers waded through thousands of pages of site-specific documents developed by the U.S. Environmental Protection Agency (EPA) to create a database of the risks and costs at 150 sites where the cleanup remedy was selected in 1991 or 1992. The goal of this mammoth research effort was to inform and influence the debate about reauthorizing Superfund, a debate that has been under way for years.

The focus of Calculating Risks is on questions of risk, cost, and efficiency at the sites on EPA’s National Priorities List (NPL), the list of sites eligible for cleanup using money in the trust fund established in the Comprehensive Environmental Liability and Compensation Act, better known as Superfund. The book includes a series of quite technical analyses of the data the authors have collected, with each chapter devoted to a different policy issue. Topics addressed include the degree of risk posed by sites on the NPL, whether cleanups at NPL sites are cost-effective, how risks are distributed geographically, whether site-specific cleanup decisions make sense, and whether communities are treated equitably regardless of social and economic status. In each chapter the authors present the relevant data they have collected (for example, the magnitude of cancer risks to populations living near the sites in their sample) and then present their views on what these data suggest in terms of future directions that Superfund policy should take.

Although most of the book is tough going for those of us not steeped in statistical techniques or in the language of risk assessment, the policy issues discussed are at the heart of the debate about what sites should be cleaned up and by how much: a suite of issues grouped under the rubric “how clean is clean?” This, along with the law’s liability scheme, is one of the two most controversial issues in the Superfund reauthorization debate. The overall thrust of their analysis is that cleanup decisions and program priorities should be based on more accurate assessment of risks and that the choice of action should be based on the relative cost-effectiveness of different cleanup remedies.

What is lacking, though, is a nuanced discussion of why these issues are controversial and what would be the practical effect of implementing their recommendations. Hamilton and Viscusi argue that the changes they propose would not reduce protection of public health. Well, that depends on how you define protecting public health. Many of the changes the authors recommend would result in less extensive and expensive cleanups. This may (or may not) be the right policy approach, but these changes would result in some sites not being cleaned up and some being cleaned up less extensively. This is not merely a technical matter. The question of which approach is the right one is in fact a philosophical issue, tied to individual values and definitions of success for the Superfund program.

For example, the book strongly reflects the authors’ view that Superfund should target–and be judged by–how site cleanups address “population risk”: the total number of disease cases avoided if an action is taken. This is in contrast to the measure used by EPA in Superfund, called “individual risk,” which refers to the probability that an individual will contract cancer (or some other illness) during his or her lifetime. The choice of how to assess risks is a critical one and affects whether sites warrant cleanup and how much cleanup is necessary. For hazardous waste sites, pollution often travels slowly through the ground for many years and may affect only a small number of people in close proximity to a site. The population-risk framework puts little value on the health threats that (at least initially) are imposed on only a small number of people. Although this can be defended as a general public policy framework, a fair treatment would alert readers to what extent this will translate into leaving pollution in place unless its victims are lucky enough to be many in number.

In the years since the authors began their work, many of the issues they raise have been addressed, some in ways they would applaud and others in ways they would decry. For example, Hamilton and Viscusi criticize the fact that risk assessments conducted at Superfund sites assessed not only the risks presented by current site use–what they refer to as “real” risks–but also assessed the “hypothetical” risks that would be present if the site use was later changed. They argue that assuming that sites should be suitable for residential use in the future (even when housing is not the current land use) leads to unnecessarily stringent cleanup requirements. EPA changed this policy in 1995, so that site remedies are now tied to likely future land use. This policy change has led to less expensive cleanups that rely more heavily on keeping contamination on site.

The increasing use of these “containment” remedies has created a new topic for debate: the reliability of the legal and other controls (referred to as “institutional controls”) that are necessary to ensure that current and future land use remains consistent with the cleanup remedy that was implemented. The authors suggest that implementing more containment remedies and adopting institutional controls at these sites would save a lot of money. The problem, however, is that without effective institutional controls, many containment remedies may not be sufficiently protective, especially if the land use changes. And land use does change over time. In fact, Superfund can be said to have stemmed from such a change: the building of houses at Love Canal in New York State on what was previously an industrial site. Increasingly, many are questioning the legal and institutional underpinnings of institutional controls. A key question is who–EPA, the states, or local governments–is responsible for monitoring and enforcing institutional controls? Although the use of such controls is becoming an increasingly common component of Superfund remedies, this question has yet to be answered in a satisfactory manner.

The authors’ desire for rational public policy and a cost-effective Superfund program are laudable and important goals. In Calculating Risks, they suggest that there are objective measures of the benefits and costs of Superfund cleanups and that using a benefit-cost framework as the decision model will ensure a rational Superfund program. This sounds deceptively simple and easy, but nothing could be further from the truth. Indeed, the authors’ own attempt to conduct such an analysis fails miserably. Because of the paucity of data on risks other than cancer, they are reduced to using cancer cases averted as their main measure of benefits. They compare the benefits of this risk avoided to all cleanup costs. Although it may be that cancer cases are often the major risk being addressed, there are also contaminated sites where cancer is not the issue. For example, at mining sites, which are among the most expensive sites to address, the major health concern is often neurological effects from lead. In many ways, Hamilton and Viscusi’s analysis, if examined carefully, shows how difficult it is to actually conduct a comprehensive benefit-cost analysis. They note that good information on risks, and therefore benefits, is not available. Although the authors properly exhort EPA to invest more in understanding noncancer risks, that void is unlikely to be filled any time soon. Yet the authors still firmly believe that this is the appropriate decision framework for site cleanups.

The rational and dispassionate tone of this book fails to communicate the flavor of what is actually a very heated and often nasty debate over the underlying question of whether benefit-cost analysis should be the decisionmaking framework for selecting what Superfund sites to clean up and how much to clean them up? More central to the regulatory reform debate is the question of whether we want public policy decisions to be based solely on the analysis of technocrats and whether we expect our public programs to be 100 percent efficient. Issues about cleanup decisions are really value judgments, not just scientific or technical decisions. The analysis conducted by Hamilton and Viscusi should help decisionmakers quantify the costs of different policy choices, but those choices depend on a range of factors that cannot be fully captured by economic analysis. Clearly, EPA ought to do a better job of assessing the risks at a site and documenting site cleanup costs. Just as clearly, EPA ought to select reasonable remedies where the costs are commensurate with the benefits. But the notion that there is such a thing as an “objective” measure of risk is just not true. Risk assessments and benefit-cost assessments are based on hundreds of assumptions about how to define benefits, assess risks, and measure costs. Choices such as whether the metric for risk should be individual or population risk have a major impact on the results, and there is no consensus on these choices.

Analyses such as Hamilton and Viscusi’s are needed to point out the gaps in the information we do have and to help Congress and EPA weigh different policy choices. But those interested in public and environmental policy should be warned that the strength of their work is in illuminating the tradeoffs among different possible approaches, not in identifying the “right” approach. The answers are not as simple as the authors would have you believe, and the issues they discuss are extremely controversial. If the answers were as straightforward as the authors suggest, environmental policy in general–and Superfund reauthorization in particular–would be a snap.