The Land That Could Be: Environmentalism and Democracy in the Twenty-First Century 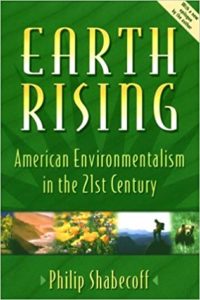 In the 1970s, environmentalism was not uncommonly castigated by leftists as a program of white upper-middle-class suburbanites largely concerned with preserving their own amenities and oblivious to the plight of the urban poor. Over the intervening years, however, the movement has significantly broadened its scope. For instance, under the rubric of environmental justice it has begun to address the issues of inner cities and working class Americans. Both Philip Shabecoff and William Shutkin applaud this expansion of concern but contend that it has not gone nearly far enough. Shabecoff’s Earth Rising and Shutkin’s The Land That Could Be argue for a major transformation of environmental politics, one that would highlight democratic procedures and grassroots participation and would focus attention on conserving communities and jobs as well as on preserving the natural world. Only such a reorientation, the authors contend, would allow environmentalism to fulfill its progressive promise of building a future that is both sustainable and just.

Shabecoff, much more than Shutkin, explicitly sets out to chart a new course for the environmental movement. As a result, his writing adopts a consistently prescriptive tone. This is what environmentalists must do, he repeatedly informs us, lest we bequeath to our grandchildren a “hot, dry, hungry, unhealthy, unlovely, and dangerous planet.” Many of his admonitions are well founded. He argues that environmentalism must reach out beyond its core constituencies to find common cause with labor unions and churches, forging a new progressive center in U.S. political life. He also calls for environmentalists to cultivate the media and the educational system more assiduously, (although one can hardly argue that these areas have been ignored by green strategists). More intriguing is his contention that alliances might be struck with certain segments of the business community and with fiscal conservatives concerned about governmental subsidies given to extractive industries and highway construction.

As these latter examples indicate, Shabecoff’s perspective is not environmentally radical. Instead, he seeks a progressive middle ground, one in which market mechanisms are employed but never relied on exclusively and in which technological developments such as genetic engineering are carefully regulated but not precluded. In a passage likely to find disfavor among the more radical greens, he argues that because the “potential benefits [of genetic technologies] for the world are huge, environmentalists ought not be in a position of knee-jerk rejection.”

Shabecoff does embrace, however, a broader philosophical radicalism, to the extent that he believes that fundamental transformations are needed if we are to address the root problems generating the environmental crisis. These problems, he contends, are deeply grounded in “our economy; our politics; our science; our race, class and ethnic relationships; our schools; and our . . . civic institutions.” Reformist proposals aimed at solving specific environmental issues are viewed as inadequate because they fail to grasp these deeper imbalances. It is the difficulty of effecting such wholesale transformations of U.S. society that leads Shabecoff to seek the broadest possible coalition of progressive forces. Such a coalition would face mighty challenges indeed, not least of which would be subordinating corporations to democratic control and instituting some form of meaningful global governance.

Shutkin’s approach is far less inclusive than Shabecoff’s. He is contemptuous of rootless professionals, liberalism, and cyber society, and he chides environmentalists for “get[ting] lost in abstractions like global climate disruption.” For Shutkin, the real problems are local in nature and demand local solutions “crafted and administered by the diverse stakeholders that constitute our communities.”

At the core of Shutkin’s vision is the idea of “civic environmentalism,” founded on a middle ground between full public governance and privatization. In the civic ideal, members of the community hammer out their differences in face-to-face gatherings. Shutkin also advocates decentralized planning to foster “green development”–development that can provide quality jobs for the poor while preserving or enhancing environmental quality. But although Shutkin places great faith in the power of communities, he also fears that communities themselves are now dissolving in an acid bath of consumerism, individualism, suburbanization, and cyber culture. Indeed, he even argues that the recent decline in civic life is largely responsible for many of our environmental ills.

A community organizer himself, Shutkin devotes the second half of The Land That Could Be to examining four particular cases of successful local activism, participatory democracy, and green development. The first two cases are from urban settings, examining small-scale agriculture in Boston’s impoverished Dudley neighborhood and the building of a “transit village”: an assemblage of shops, residences, and public spaces clustered around a metro station in Oakland’s Fruitvale district. The third case study, examining open space preservation in the ranchlands of Routt County, Colorado, is a significant departure from the book’s general urban orientation. The final example reveals the comprehensive nature of Shutkin’s approach by turning to the suburban environment, showing how several New Jersey towns have successfully embraced “smart growth” based on community planning.

The case studies are heartening, and there is much to laud in Shutkin’s insistence on local democracy, civic engagement, and community solidarity. Still, I cannot help but wonder if the hopes do not exceed the possibilities. It may be pleasing to envisage half-abandoned inner-city neighborhoods being revitalized as agro-urban villages providing high-quality produce for upscale restaurants and ethnic markets, yet the likelihood of widespread success seems limited. The idea of the urban transit village has more salience: The dense clustering of residential, commercial, and public spaces around mass transit stations has a proven history, and, if significantly extended, could help reduce the pressures for suburban sprawl while reinforcing the urban fabric. Yet even here the chosen example proves somewhat disappointing: The Fruitvale Transit Village will contain about 15 residential units, hardly the kind of high-density housing advocated by the author.

Shutkin contends that the romantic inclinations of the early environmentalists partially diverted their attention from issues of justice and democracy. Yet his positions are similarly colored by romantic sensibilities. For example, he consistently idealizes the virtues of local democratic governance, blaming much environmental degradation on civic decline and ultimately on “the loss of . . . village-like settings necessary to sustain social capital.” How then can one explain the fact that concern for the environment was much lower in the days when most Americans lived in village-like settings and had relatively high rates of civic participation? Similarly, Shutkin turns a blind eye to the contradictions that often emerge in the actual functioning of community environmentalism. Across the country, neighborhood organizations representing affluent urban and inner suburban districts consistently oppose any measures that would result in urban intensification, particularly those that would bring in lower-income people. They do so, moreover, in the name of local environmental protection, even though such actions collectively encourage suburban sprawl. The institution of participatory democracy may even share some of the blame, since it favors the voices of strident individuals most determined to protect their own amenities and property values, whereas those who mildly favor intensification–or who simply do not have time for the requisite meetings–end up with little say. Representative democracy may be imperfect, but it does have its advantages. 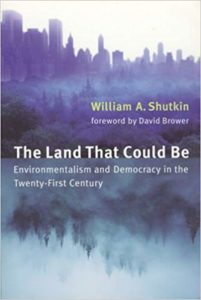 Although Shabecoff is more pragmatic than Shutkin, he also fails to fully deal with the paradoxes of political action. As a result, his prescriptions sometimes seem naïve, founded in a simple moral universe in which the good and the bad are easily identified. Thus he tells us that since environmentalists must join in the effort to stop people from killing one another, “Greens throughout Western Europe protested the ‘ecocide’ [that] the heavy NATO bombing was causing” during the 1999 war in Serbia. Although there certainly were principled reasons for opposing this air war, it can hardly be portrayed in such simplistic terms. NATO bombed Serbia, after all, partly because it wanted to forestall genocide in Kosovo.

In his effort to unite the environmental community behind his program, Shabecoff also tends to paper over some of the deepest cleavages within the movement. Most important, he misreads the significance of the eco-radical contingent. “Except for a radical fringe,” he informs us, “environmentalists are by no means anti-science or anti-technology.” Although he is no doubt correct about the mainstream, the radicals by no means constitute a mere fringe. Stridently anti-science and especially anti-technology voices are numerous and often eloquent, and their influence on public environmental consciousness is extensive. Antipathy to science is not uncommon among the committed grassroots workers of the green movement–the very people whom Shabecoff hopes might effect the needed social changes. Support for science, on the other hand, is strong among the institutional, reformist environmental groups that Shutkin, for one, regards with more than a little suspicion.

Shutkin himself exhibits a strong aversion to information technology, remaining oblivious to the environmental benefits that flow from a wired world. By condemning the Internet as “nothing more than an around-the-clock . . . cybershopping mall” that undermines civic behavior while generating “placelessness and anomie” he needlessly risks consigning his views to the neoluddite fringe, a position in which they otherwise do not comfortably fit. The Internet has already proved itself a potent tool for environmental organizing, working effectively on scales ranging from the neighborhood to the global economy. A forward-looking environmentalism must surely embrace the Internet, seeking to enhance its capacity for community and democracy building.

Shutkin’s understanding of science also leaves something to be desired. He contends, for example, that only a little education is necessary to produce the serviceable “barefoot epidemiology” of the “citizen experts” who can then teach us about environmental cancers and other diseases. Certainly citizens’ hunches about environmental maladies often merit further scrutiny, but in the end only genuine epidemiology, requiring exhaustive scientific investigation, can provide the necessary answers.

Despite these concerns, I found both books highly valuable. Shabecoff’s Earth Rising provides a useful summary of the current state of environmentalism, and the course that he lays out for future action has much to recommend it. He wisely encourages environmentalists to seek allies from other political fields, even those, such as the labor movement, that often take opposing positions on specific issues. As Shabecoff argues, this would require granting community viability, and hence jobs, much higher priority than is usual in environmental politics. It would also require accepting if not embracing market forces while simultaneously working to “create a capitalism with a green face.” Environmental activists, particularly those who have recently taken to the streets in Seattle and Washington, D.C., would be wise to heed Shabecoff’s advice to reform rather than eliminate global organizations such as the World Trade Organization, while working to institute safeguards rather than prohibit genetic technologies.

Shutkin’s The Land That Could Be is in many ways the more powerful as well as the more problematic of the two books. The author’s experiences as a community organizer and grassroots activist lend it a certain immediacy. For those who find only despair in the environmentalist message of accelerating degradation, moreover, Shutkin’s message may prove therapeutic. There is real hope in his stories of communities reaching the common ground necessary to forge development strategies that are at once environmentally benign and socially sustaining, and his insistence on the centrality of democracy, social justice, and civic engagement is a fundamental moral call.