An antidote to sprawl

Cities in the Wilderness: A New Vision of Land Use in America

Bruce Babbitt, former Arizona governor and U.S. secretary of the Department of the Interior, proposes not so much a new vision of land use in the United States, as indicated in the subtitle of his book, but rather a new vision of land-use planning. In Babbitt’s scheme, the federal government would take a key role in preserving natural and cultural landscapes, largely by reining in urban sprawl. The government would accomplish these goals not by simply mandating change but by working closely with state and local governments, as well with property owners, developers, environmental organizations, and other constituencies, in a political system that Babbitt aptly calls “participatory federalism.” 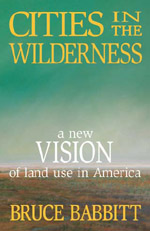 Cities in the Wilderness comes with endorsements on the back cover from Harvard biologist E. O. Wilson, architect Frank Gehry, and former president Bill Clinton. Their praise is well deserved. Babbitt’s main argument is bold and compelling, his presentation engaging and informative. Throughout the book, one sees the distillation of wisdom acquired over many years of fighting environmental battles at the national, state, and local levels. Babbitt has been there, and it shows.

Babbitt’s underlying argument is that destructive urban sprawl continues largely unabated because our political institutions have not been adequate to the task of controlling it. Land-use planning has generally been the province of local governments, which rarely have the political power or financial resources to contend with developers constantly seeking exemptions from existing plans. The complex welter of local jurisdictions makes the situation even more intractable. If sprawl is successfully combated in one city, builders can usually move to lands just outside the city limits or to adjacent counties. Only the federal government, Babbitt contends, has the scale of power and the scope of vision necessary to ensure that wild and pastoral landscapes remain undeveloped.

The federal government can best take on its land-planning responsibility, Babbitt argues, by using and expanding its existing powers, especially as embodied in legislation such as the Endangered Species Act, the Clean Water Act, and the National Antiquities Act. But this does not mean unilateral federal action. Babbitt favors a deliberative approach that involves intense negotiations and numerous tradeoffs. Far from utopian, his method is fully pragmatic, based firmly on his own lengthy experiences in environmental politics.

Much of Cities in the Wilderness is devoted to case studies that exemplify how informed federal leadership has already brought about major environmental victories; victories, moreover, that are locally and nationally popular. The first substantive chapter deals with the Everglades, where a state and federal partnership is now promising not just environmental preservation but actual restoration. Babbitt tells the complicated story of the negotiations involved in developing a comprehensive Everglades restoration plan, which involved not just taking on developers, “big sugar,” and the Army Corp of Engineers, but actually bringing them over. His overriding question—what went right?—is essential if perhaps counterintuitive. “Why such a spectacular success in the Everglades,” Babbitt asks, “in a time of failures elsewhere?” He answers his query by addressing the specificities of southern Florida’s natural and political landscapes and by detailing the hard work and creative approaches undertaken by the federal negotiating team. Much opposition was encountered along the way. Even prominent environmental leaders at one point accused Babbitt and company of having sold them out, a charge that Babbitt has endured on several other occasions. The end result for the Everglades, however, is rightfully seen as a landmark of both environmental protection and cooperative federal leadership.

BOUNDING URBAN AREAS, AND THUS FORCING FURTHER GROWTH TO BE INTENSIVE RATHER THAN EXTENSIVE, EMERGES AS A CORNERSTONE OF BABBITT’S LARGER PROJECT.

From the Everglades, Babbitt moves on to consider a number of other federal/local attempts to restrict suburbanization and in so doing to preserve natural habitats. Such efforts have met with some success, although not as impressively as in the case of southern Florida. Most of Babbitt’s other examples come from the West, ranging from the conserving of the last tracks of coastal sage in southern California to the struggle to keep the few remaining perennial streams in southern Arizona from running dry. The most eye-opening of these case studies is that of Las Vegas.

Las Vegas began to explode in size and population, Babbitt explains, as the ironic consequence of a deal cut to preserve Lake Tahoe, hundreds of miles away on the California-Nevada border. Sensitive lands around the lake were to be protected through purchase, an expensive option to say the least. The requisite funds were to be obtained by selling federal lands around Las Vegas to developers. Although the plan helped safeguard Lake Tahoe, it came at the price of massive sprawl in southern Nevada, in the process further endangering several already threatened species, including the desert tortoise. The challenge thus became one of limiting the future expansion of Las Vegas while making sure that sensitive ecosystems on its periphery would be adequately protected. Fortunately, the city’s residents simultaneously began to demand parks, open space, and other outdoor amenities. When the new U.S. senator from Nevada, Harry Reid, took up their cause, an urban perimeter was established around the city, promising ecological security for outlying areas. Reid and other environmental leaders were greatly aided in this endeavor by the Endangered Species Act.

Las Vegas, with its gaudy exuberance and wasteful use of resources, can hardly be considered an environmental model. Babbitt’s aim, however, is more modest that that. His new land-use vision concentrates on areas beyond the urban fringe, in which reasonably intact ecosystems can still be found. He would not lock up such places, not most of them at any rate, from economic exploitation, but rather would subordinate mining, grazing, and logging to an overriding public mandate for long-term biological integrity. Such a mandate will be all but impossible to fulfill as long as cities continue to expand willy-nilly into their rural peripheries. Bounding urban areas, and thus forcing further growth to be intensive rather than extensive, emerges as a cornerstone of Babbitt’s larger project. He correspondingly argues that “cities . . . should be visualized like an archipelago, as islands surrounded by a sea of open landscapes” (hence the book’s title). A more intensive system of urban land use, moreover, would help the United States reduce its dependence on oil, to both environmental and geopolitical advantage, which presumably is the reason why E. O. Wilson in his blurb on the back cover calls the book not only “marvelous” but also “patriotic.”

The threat of rural sprawl

Babbitt’s concerns go beyond the threat of urban expansion to include what he calls, in a delightfully oxymoronic turn of phrase,“rural sprawl.”In his cleverly entitled chapter “What’s the Matter with Iowa?”, Babbitt defines this problem as the relentless spread of corn and soybean fields from fence row to fence row, leaving virtually no space for wildlife and threatening the state’s agricultural base with soil erosion and water contamination. Such agricultural overextension, Babbitt carefully shows, is not the result merely of market forces but is also partially rooted in the often illogical and not uncommonly contradictory policies of the U.S. government. Especially considering the historically rooted role of the federal government in excessive agricultural extension, it would seem reasonable to expect Washington to take a lead role here as well. If only 20% of the tall grass prairies could be reborn, Babbitt argues, effective ecosystem functions could be restored in the Corn Belt. In this instance, international pressure along with the World Trade Organization (WTO) might force the federal government to reduce if not eliminate the agricultural subsidies that so encourage overplanting. The most reasonable approach in such an event, Babbitt argues, would be a WTO-compliant farm nexus that would engage landowners in a comprehensive program of land and water restoration as a condition of federal aid.

One of the pleasures in Cities in the Wilderness is Babbitt’s willingness to reveal how eco-political negotiations work in practice. At times he seems keen to divulge secrets that almost anyone else in his shoes would have preferred to keep concealed. When Babbitt was governor of Arizona, for example, he quickly ran into a major water resource dilemma. The federal government was then building the Central Arizona Project to deliver Colorado River water to the rapidly urbanizing south-central portion of the state, but by law it was supposed to withhold deliveries to any jurisdiction that had failed to develop a plan to control groundwater depletion. Unlike his predecessors, then–Secretary of the Interior Cecil Andrus intended to enforce the law. Babbitt, however, felt that he had no political choice but to demand that Washington stay out of Arizona’s local business of apportioning water. In private, however, he negotiated with Andrus to force the creation of the mandated groundwater plan. At one point, Babbitt urged the secretary to threaten that the federal government would pull support for the entire water project if compliance was not gained. Andrus agreed and made the threat, which Babbitt immediately and publicly denounced, as he had promised. Once the ritual denunciation had been made, however, the hard work of developing a state groundwater plan began in earnest.

Cities in the Wilderness embodies that rare combination of an argument that is at once pragmatic, honest, and visionary. One can only hope that it will be well read and well heeded. It will, of course, generate substantial opposition. Many will reject on principle Babbitt’s call for increased federal involvement in land-use management, whereas others will be threatened by many of his specific proposals, such as his call for eliminating grazing on federally owned desert lands. Certainly the current administration in Washington will not take kindly to most of Babbitt’s proposals. But even President George W. Bush has recently expressed fears about the country’s “addiction to gasoline.” So perhaps the time has finally come when such ideas can get the attention that they deserve.