Designs on Nature: Science and Democracy in Europe and the United States

Polling data from the late 1990s in Europe and the United States revealed curious differences in public attitudes. In the United States, there appeared to be a high level of acceptance of agricultural or “green” biotechnology, but far less confidence in the acceptability and safety of medical or “red” biotechnology, especially in relation to the use of embryonic stem cells. In Europe, the public was quite alarmed about green biotechnology and relatively sanguine about red biotechnology. Those differences are reflected in markedly different regulatory institutional structures and public policies. Not only are there contrasts between the United States and Europe, there are important differences among European countries. Nonetheless, policymakers responsible for biotechnology in each jurisdiction have tried to invoke the authority of science to legitimate whichever political spin they have chosen to put on alternative trajectories of innovation. 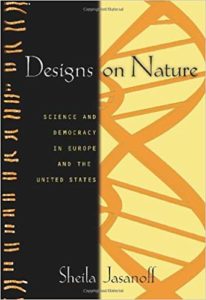 Sheila Jasanoff ’s Designs on Nature: Science and Democracy in Europe and the United States explores the similarities and differences in policymaking institutions and processes within and between red and green biotechnologies and within and between the United States, the European Union (EU), the United Kingdom, and Germany. Jasanoff, the Pforzheimer Professor of Science and Technology Studies at the Kennedy School of Government at Harvard University, is a widely traveled scholar with lengthy experience of comparative cross-national and cross-cultural comparative research methods. She is also one of the leading U.S. scholars in the sociology of scientific knowledge. Trained as a lawyer, she is skeptical of policymakers’ claims that they have definitive scientific justifications for their policies. She assumes, with good reason, that when policymakers portray their decisions as based on, and especially as based solely on,“sound science,” their rhetoric seriously oversimplifies the underlying reality. Routinely, other, nonscientific considerations are playing important roles in those policy decisions.

To illustrate her analysis of the forces at play, she draws examples from biotechnology: a pivotal technology at this juncture in the evolution of industrial society. Although there is a consensus that genetic engineering is important, opinions differ on how that importance is to be characterized. Jasanoff is right that the life sciences are widely seen as “a fertile source of medical, agricultural, and environmental innovation for a world straining to overcome the limits to growth.” She also observes correctly that biotechnologies are the “catalysts of domestic and international political turmoil.” Jasanoff appreciates that debates over biotechnology are changing the ways in which public policies for science and technology are decided and legitimated, especially in Europe, and that it is important to understand those changes and the underlying trajectories.

Jasanoff provides a refined and subtle comparative analysis of the ways in which policy decisions about red and green biotechnologies have been made in the United States, the EU, the United Kingdom, and Germany. She shows, with her mastery of detail and structure, that the ways in which decisions are made about the pursuit of particular scientific research agendas and the development of types of technologies depend profoundly on the political cultures within which those decisions are made. Whitehall and Westminster, the seats of governmental and parliamentary decisionmaking in London, are culturally very different from the White House and Capitol Hill. They are both very different from the European Commission and the Council of Ministers in Brussels. The culture of the German government in Berlin is different from all of those, as indeed it differs from its predecessor in Bonn.

Jasanoff ’s account is well-informed and engaging, though inevitably a few details are missing. One ironic fact, on which Jasanoff does not comment, is that the review of 1990 European Directive 90/220 on the deliberate release into the environment of genetically modified organisms, and its replacement 11 years later by Directive 2001/18, which resulted in a marked tightening of the conditions under which genetically modified (GM) crops could be introduced into European markets, was initiated at the behest of the biotechnology companies, because they thought that it would lead to a relaxation rather than a tightening of requirements.

A second curiosity concerns an opinion survey conducted by the U.S. Food and Drug Administration in the final months of the Clinton administration, which revealed that about 74% of U.S. citizens thought that food products containing GM ingredients should be labeled accordingly. The administration, which did not support labeling, never published the results of the survey. A 2000 survey by Peter Phillips and Heather Foster found similar results: 57% of a sample of U.S. citizens indicated that if food products were labeled as containing GM ingredients, they would be less likely to buy them.

The introduction of a labeling requirement in Europe in 1997 transformed the attitudes of consumers, food manufacturers, and retailers. Before the change in labeling rules, European food manufacturers had been willing to include GM ingredients in their products, especially if they provided a cost saving, and retailers had been willing to stock those products on their shelves. Once European consumers started to indicate that they would not buy products labeled as containing GM foods, retailers insisted that they would not stock them, and manufacturers were obliged to use non-GM ingredients.

Jasanoff shows how linguistic and terminological innovations have been used to try to manage policymaking processes. For example, in the context of UK discussions about biomedical research on human cell cultures, the term “pre-embryo” was coined to refer to the 14-day conceptus before conspicuous cell differentiation appears. Jasanoff explains how invoking this novel concept served to define an intermediate category of cells that do not constitute unborn children and are therefore acceptable objects of research. Curiously, although that term was invoked during debates that preceded the passage of new legislation, the legislation did not use the term nor has it been widely invoked subsequently in the United Kingdom by the research community, although it has been actively contested in the policy literature. Jasanoff describes the concept of a pre-embryo as being coproduced out of a complex mixture of pragmatism, empiricism, and trust in experts. Because similar combinations of factors were not present in Germany or the United States, those countries reached quite different legislative and policy conclusions.

Similarly, the use of the term “substantial equivalence” to describe the relationship between a GM food and its non-GM counterparts was invoked in both the United States and Europe to convince the public that the new GM products were safe. As Jasanoff says, it provided a “naturalizing doctrine.” Although in the United States the substantial-equivalence designation is sufficient to convince regulators that a GM food presents no problems, in Europe the term no longer connotes safety. In fact, European regulators interpret it to be no more than a starting point for an assessment.

Jasnoff shows how different national approaches to political representation, participation, and deliberation in policymaking processes influence outcomes even in highly scientific fields. In controversies about biotechnology, power was often exercised in the United States by invoking the authority of science, whereas in the United Kingdom, decisions were routinely legitimated by reference to expertise, and in Germany by reference to institutional rationality. Jasanoff shows that in each of these approaches, the ostensible representations were oversimplifications of more complex, contestable, and contested processes.

From a European perspective, it is clear that Jasanoff is right to argue that influential Europeans are not trying to reinstitute a simple-minded distinction between science and politics as two entirely separate and unrelated activities, between which there are leakproof seals. On the contrary, European citizens, policymakers, and scientists are increasingly appreciating that there are several unavoidable interactions between science and politics and that these interactions need to be carefully and accountably managed if processes and outcomes are to be scientifically and democratically legitimate. Not having visited the United States for almost 15 years, I was not sure if Americans were trying “to return to an imagined prelapsarian state …by rebuilding the walls between science and politics,” but on this matter I defer to a well-informed scholar and U.S. resident. However, given that, as Jasanoff emphasises, the 1980 Bayh-Dole Act allowed grant holders to patent discoveries that emerged from research supported by federal funds, it is hard to understand how biotechnology and its scientific base can plausibly be portrayed as disinterested.

ANYONE WHO READS THIS BOOK AND STILL THINKS THAT SCIENCE IS A POLITICS-FREE ZONE HAS NOT UNDERSTOOD ITS ARGUMENT.

Anyone who reads this book and still thinks that science is a politics-free zone has not understood the argument. On the other hand, by understanding the argument, a reader can gain a nuanced appreciation of the ways in which science and technology decisionmaking crucially depends on, and interacts with, political culture. Corresponding to those differing cultures, there are contrasting approaches to participation in policymaking, as well as radically different forms of accountability, authority, and expertise.

In Europe, traditional structures and procedures for deciding which technological innovations to encourage, which to forbid, and which to restrict broke down in the late 1990s under the weight of issues such as mad cow disease and biotechnology. Today, a fascinating set of institutional experiments in policymaking is underway in the United Kingdom and the EU, especially in relation to green and red biotechnologies. An entire generation of novel institutions, such as the European Food Safety Authority, its counterparts in the 25 EU member states, the UK Human Genetics Commission, the Commission de Génie Biomoléculaire in France, and the Gentechnikkommission in Austria, have been established. The United States, on the other hand, is trying to maintain its institutional status quo.

Those European institutional innovations are too new to evaluate, and not all attempted solutions will be equally sustainable. It would, however, be premature to predict that European countries will converge on a shared understanding or that Europe and the United States will converge. The outcome of the World Trade Organization (WTO) dispute that sets the United States and Canada against the EU on the issue of the acceptability of GM foods will set the stage for another round of readjustments, but the resultant changes may be uncomfortable for many of the key protagonists. The indications are that the WTO Dispute Panel will argue that a de facto moratorium on the introduction of GM foods in Europe from October 1998 until August 2003 was inconsistent with the rules of the WTO but that the way in which the EU has subsequently imposed restrictions on products from North America is consistent with those rules. The analysis provided by Jasanoff in this scholarly and lucid study suggests that whatever the eventual outcome of the WTO dispute, the probability of institutional and policy convergence is slight, and that diversity may well be sustainable or even unavoidable.