Jacques Leslie is a journalist, and Deep Water has a journalist’s style. It reads well and tells a compelling story. The book relates first-person accounts of three protagonists, each of whom is preoccupied with large dam projects. The stories are rich in detail and intended to teach lessons about large projects that are not to be found in the dry reports of development consultants and international organizations. 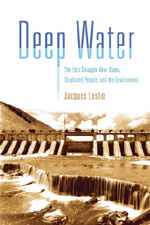 In the mid-1990s, the World Bank, at the urging of nongovernmental organizations and with the cooperation of donor organizations, supported the development of an independent commission to study the effects of large dams. The World Commission on Dams (WCD) was made up of 10 members with a wide variety of views. The commission’s 400-page report, Dams and Development, appeared in 2000 to great publicity (Nelson Mandela and other dignitaries made speeches at the press conference announcing its release), and the report remains available at the commission’s Web site (dams.org).

But as Leslie notes, with seeming regret, the report has had little lasting impact on either the World Bank or on the appetite for new dam projects. Many observers think that is all to the good. The dam-building community and many in the development community echo the World Bank’s senior water advisor John Briscoe’s view that the commission’s report was hijacked by dam opponents and does not provide a reasonable path for the future.

Today, 10 years after the hiatus on new dam building that occurred in the mid-1990s, the dam industry is in full gear, especially in South America and Asia, and is also riding a wave of privately financed small and mid-sized projects as a result of rising energy prices. The impact of Dams and Development has turned out to be less than its proponents presumably hoped for. Dam projects remain controversial, but they are moving ahead at a fast rate.

Leslie’s stories show why dam disputes are so contentious, but they offer little help in resolving disputes or setting a workable policy for guiding dam planning. He provides a vivid close-up look at disputes but fails to provide an overview that could help us gain some perspective.

Deep Water follows three of the former WCD commissioners through their daily dealings with dams and other water projects. Leslie chooses one anti-dam activist, one middle-ofthe-road scientist, and one pro-dam water manager. Deep Water is not a book written by someone sitting around a university campus or library, but by someone who spent long stretches of time in the field, on the front lines of the current water wars. Leslie, a former war correspondent, knows his job and does it well.

Medha Patkar is an anti-dam activist in the Narmada River basin of western India, in the states of Gujarat and Madhya Pradesh. Hers is a story that would try the conscience of the most avowed dam proponent. Using Gandhian tactics, she has fought a slowly losing battle with the Indian and state governments over the building of a cascade of dams on the Narmada that was funded in part by the World Bank. She has undertaken fasts, put herself in near-death situations to stop rising water levels, and led dam-site occupations and other nonviolent protests. Although the story of development on the Narmada has many facets, at its core is a story of compassionless dislocations of the local population, incredible mismanagement, and a lack of support for those most affected by the projects. The national and state governments have even ignored resettlement and environmental policies that they were obligated by treaty or law to uphold. As with many large projects, the net economic benefits of the Narmada developments may (or may not) be positive, but the distribution of those benefits is aimed squarely at entrenched economic interests and away from the people displaced, who not surprisingly are poor and relatively powerless. Dam building on the Narmada was in part responsible for the WCD.

Thayer Scudder is a California Institute of Technology anthropologist and expert on resettlement. In contrast to Medha, who is passionately focused on one river basin, Scudder is a scientist who has worked on hundreds of dam projects. Leslie follows Scudder on projects that are mostly in southern Africa (Lesotho, Zimbabwe, and Zambia). Although Scudder is intended to represent a middle-of-the-road perspective, the stories in this second part are anything but. The African projects around which the story is told are disasters. The Kariba project on the Zambezi is a resettlement and ecological nightmare, aided by a good deal of political corruption. Despite this, Scudder is portrayed as retaining his optimism about the potential benefits that can result from well-managed dam projects. Still, by this time in the book, the reader can be forgiven for wondering if there ever is such a thing. We have yet to meet a good dam in Deep Water, though Scudder holds out hope.

THE DEBATE AT THE HEART OF DEEP WATER IS NOT ABOUT DAMS; IT IS ABOUT THE INCREASING HUMAN POPULATION AND HOW TO SUSTAIN IT.

Don Blackmore is an Australian water resources manager. His is the story of a “healthy, working river.” To be clear, the Murry River projects in Australia have had adverse effects on the environment and on indigenous peoples. But because there are fewer people affected here than in the other stories, the tales of botched resettlement seem less disturbing. In addition, these projects have benefited from good governance and from the involvement of stakeholders who were richer and more sophisticated than the people fighting the Indian and African projects. The success of water management in New South Wales, Leslie argues, has as much to do with good government as with good dams.

So what does one take away from this lively book? The cover blurbs on Deep Water are misleading. In the end, the book has little, in fact, to do with dams and more to do with public administration and the mismanagement of large infrastructure projects. In reading that dam projects experience delays and cost overruns, usually do not produce the promised economic benefits, and then also cause irreversible environmental harm, I was reminded of Flyybjerg et al.’s recent book on transportation projects (Megaprojects and Risk, Cambridge, 2003). The fundamental issues are the same.

At the heart of the question of all big infrastructure projects is “us.” There are simply too many of us. The debate at the heart of Deep Water is not about dams; it is about the increasing human population and how to sustain it. Human populations need many things to survive. They need potable water, irrigation, power, protection from natural hazards, and many other things that dams provide. Other ways of providing services such as energy (for example, by the use of wood for fuel) also have adverse social and environmental outcomes. The dams debate is still waiting for the impartial analysis promised by the WCD. Deep Water provides fuel for that debate, but little light.