Out of the bottle

By Daniel B. Gordon

Living With the Genie: Essays on Technology and the Quest for Human Mastery

In 1995, Gartner Group analyst Jackie Fenn invented the term “hype cycle” to describe the pattern of broad public interest in technologies. A typical hype cycle begins when a “technology trigger”–a media event, significant buzz, something–brings a new technology to the attention of the public beyond its immediate community. As expectations about the technology rise quickly from background noise to a “peak of inflated expectations,” the technology takes on the aura of immortality, omnipotence, and sliced bread all in one. Alas, it falls with equal speed into a “trough of disillusionment,” where the very people who flocked to the technology on its way to its peak not only scorn it but also don’t admit they ever liked it in the first place. With time, a technology that has fallen from grace will rise back through a more gradual “slope of enlightenment” to a “plateau of productivity,” where it finds a set of humble but useful applications in the real world. 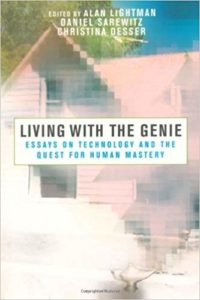 If we apply this notion of a hype cycle to the science and technology enterprise as a whole, then surely we are just now emerging from a big trough of disillusionment precipitated by the collapse of the Internet economy and the onset of the war on terror.

Inescapably this is a question of values, an uncomfortable topic for many technologists and, oddly, many policymakers as well. Questions of value entrain deeply held beliefs about which there are no good ways to debate and decide. Questions of value segue quickly into “fightin’ words.”

Living With the Genie: Essays on Technology and the Quest for Human Mastery doesn’t shrink from discomfort. This collection of essays, edited by Alan Lightman, Daniel Sarewitz, and Christina Desser, is a broad survey of thinking on the topics of computer-, bio-, and nano-based technologies (what one of the contributors, Ray Kurzweil, dubs “GNR,” for genetic engineering, nanotechnology, and robotics). The editors attempt to bring together some serious thinking about technology and values on the eminently sensible ground that just because values are personal does not mean they are arbitrary.

It’s a good collection. Almost every player in the “technology and human mastery” intellectual playground–expert-ism, technophilia, Luddism, semiotics, Nature, utopia, catastrophe–gets a decent audience in one or another of the essays. A few gaps and misplaced emphases don’t detract from the whole.

The editors (who also contributed essays to the book) are well positioned to bridge the gulf between the sciences and the humanities. Alan Lightman is a physicist by training and writer/teacher by profession, most recently at the Massachusetts Institute of Technology. Daniel Sarewitz is affiliated with the Consortium for Science, Policy, and Outcomes at Arizona State University, which sponsored the publication of Genie and the eponymous conference (described at www.livingwiththegenie.org) whose proceedings were the essential grist for this book. Christina Desser is the director of the Funders’ Working Group on Emerging Technologies, an “association of foundations concerned with the environmental, cultural, and political implications of emerging technologies.”

The standoff between Luddites and technophiles is familiar to anyone who has considered questions of technology and values. The core slogan of the technophiles is “fabulous riches”–material, intellectual, emotional, philosophical, or all of the above. With equal predictability, the followers of old King Lud march under the banner of FUD (fear, uncertainty, and doubt). To their credit, the editors have avoided these caricatures and have tried to persuade both sides to adduce some arguments for their point of view.

A good example of this in Genie is Ray Kurzweil’s “Promise and Peril.” Kurzweil, a prolific and successful inventor and entrepreneur who has written several books on the future of technology, tries hard not be a knee-jerk technophile. After painting a picture of just how quickly the GNR technologies will change the future, Kurzweil writes, “I do feel that relinquishment [vowing not to pursue a line of scientific inquiry or develop a line of technology] at the right level is part of a responsible and constructive response . . . the issue, however, is exactly this: at what level are we to relinquish technology?” He actually tries to answer this question in some detail, including a proposal “to relinquish the development of physical entities that can self-replicate in a natural environment . . . [or] such entities would have to obtain [replication codes] from a centralized secure server, which would guard against undesirable replication.”

Kurzweil has an extensive argument for these kinds of proposals based on our experience so far with computer viruses and other information technology threats. The point is that, for Kurzweil, the discussion about how to restrict technology is concrete and is largely solved by the give-and-take of the development process for technology, without recourse to bans, moratoria, or other restrictions.

An equally thoughtful riposte comes from the Sarewitz and Woodhouse essay “Small Is Powerful.” Considering the history and inner dynamics of decisionmaking about nanotechnology, they conclude that “wise steering of any technology requires coping with two issues that are largely absent from the promotional juggernaut behind nanotechnology: disagreement and uncertainty . . . [E]xpertise is no substitute for political negotiation because analysis alone can never settle questions as complex as those involved in directing technological innovation.”

Several essays reinforce the theme that the blind spots of an expert community make it difficult or impossible for them alone to make the best decisions about the course of science and technology.

One important source of these blind spots is commercial pressure, whether in the form of haste because of time to market or of one-sidedness fueled by self-interest. But another, more subtle blind spot arises from expert community enthusiasm. Most experts are motivated in part by sheer enjoyment of their domain of expertise, and this enjoyment can lead to lack of perspective. At some level, the argument runs, scientists just want to “do science.” This pressure leads them to downplay risks just as surely, if more insidiously, than do commercial pressures.

For many nonexperts, signs of caution or humility on the part of an expert group (the nuclear engineering community, say, or the life sciences community) would be an important factor persuading us to venture forward. Sadly, few such indications of caution are to be found. Two essays in Genie mention the 1975 Asilomar Conference (organized by the National Academies) on recombinant DNA as a shining example of voluntary “relinquishment.” But it is an example almost 30 years old.

The contributors to Genie argue also that the market by itself is not a good instrument to address human concerns about technology. In “Changing Conceptions: Governance Challenges in the Engineering of Human Life,” law professor Lori Andrews concludes that “The market [for human fertility technologies] emphasizes short-term gains, hypes inappropriate technologies, fosters premature adoption of technologies, and creates barriers to access for the underprivileged.”

This is strong stuff in an era where the market is thought to possess practically unlimited powers to heal the sick and even raise the dead. But the argument is simple: You can’t trust greedy people to make good decisions, particularly when the payoff to greed is quick and the potential down sides remote, either in probability or in time.

Not really, according to Genie. Again and again, government emerges as an essential party to the technology regulatory system.

Not that the regulatory systems in place today are perfect. Various contributors to Genie excoriate the regulatory apparatus for essentially the same problems as any nonmarket framework: inefficiencies, poor matching of supply and demand, and creation of a large bureaucracy with the attendant danger of cronyism and influence crowding out merit.

“What Kinds of Science Should be Done?”, by the philosopher Philip Kitcher, considers the characteristics of an ideal system for deciding on science and technology. To radically compress Kitcher’s argument, the essential is the construction and constant revision of an atlas of scientific significance that would trace the lines connecting the technical questions to which scientists dedicate much of their lives with the broad issues about which human beings are curious and that have practical consequences for human lives. These significance graphs would enable people interested in setting policy priorities to appreciate the full range of opportunities to understand all the ways in which some inquiries might be expected to bear fruit.

There is much more in Genie. Several essays deconstruct our ideas of Nature and the natural, in an attempt to view critically the technophile conceit that science can fix all of the defects in Nature or the Luddite idea that Nature is intrinsically superior to any fruits of our reason.

One kind of nature that gets short shrift in Genie is our own human unconscious. There is not much psychoanalyzing in the book, which is a pity. It is not just ignorance that makes our technology projects “gang agley.”

Christina Desser’s “Only Connect,” an extended meditation on vulgar Las Vegas, exquisite Chartres, and Hans Christian Andersen, fills in part of the gap in psychological narrative with a thoughtful dig into what is artificial about our artifacts. And Alan Lightman’s “The World is Too Much With Me” unearths the “struggle to hear one’s inner self in the noise of the Wired World.”

But these essays are not targeted at an exploration of our psychological underbelly as an obstacle to scientific mastery; as an outpost of Nature, if you will, within the very seat of our reason.

Forbidden Planet, a science fiction movie staple of my youth, depicted a technological paradise with a horrible intrinsic flaw. The planet was in essence a huge machine animated by “pure mind.” Alas, the Krell, the dead alien race who had built the machine, had forgotten about the dark side of the mind and had been destroyed by its violence as amplified by the massive planetary device-engine. (Wonderful scene where one of the good guys, mortally stricken, says, “they forgot about the power of the id.” The only solution is to get away before the planet blows itself up.) Genie could have used an essay or two on this theme.

Oh, and one last note. Be certain to read “Literary Devices: Speculation,” a witty and moving contribution by Richard Powers. It merges John Fowles’ The Magus with Michael Crichton’s Prey. Enough said.