Red Sky at Morning: America and the Crisis of the Global Environment

Over the past half century, the environmental jeremiad has emerged as a minor publishing genre. Such works typically provide a grim assessment of the environmental situation before warning us that the time has come: Act now, and doom may be averted; dither, and all may be lost. Prescriptions for salvation follow, and in the end we glimpse a possible future that is not only environmentally sustainable but also just and personally fulfilling.

The formulaic aspects of such works often make for tiresome reading, but the genre as a whole is nonetheless valuable. Just because a prophecy is repeatedly made and continually ignored does not mean that it has no truth. Key global environmental indicators do indeed continue to decline, just as new threats constantly emerge. Meanwhile, new generations of young adults keep rising, ready for the message. The eco-jeremiad, in other words, serves an important purpose.

Not all would-be prophets, however, are equal to the task. The best (Rachel Carson) rouse society, whereas the worst (Jeremy Rifkin) discredit environmentalism with false alarms. The right tone, no doubt, is difficult to hit. Warnings should be stern but not strident, rooted carefully in science yet willing to leap from the never-quite-certain scenarios of scientific modeling to concerted political action. The changes advocated, moreover, must appear bold enough to address the underlying disease, yet seem feasible in the end. Throughout, today’s pessimism must be balanced by tomorrow’s hope. 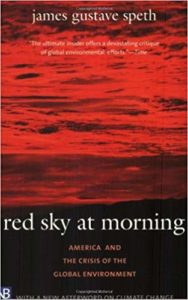 James Gustave Speth’s Red Sky at Morning fulfills the requirements of eco-prophesy as well as any recent contenders. Speth is superbly qualified for the role. Dean of the Yale School of Forestry and Environmental Sciences, Speth founded and presided over the World Resources Institute. He also cofounded the Natural Resources Defense Council and served as chief executive officer of the United Nations Development Programme. Drawing on his broad array of practical experience, Speth is able to take the required global view of our environmental predicament yet remain grounded in U.S. politics and policymaking.

Overall, Speth’s analysis is cogent and comprehensive, and his prescriptions are well considered. He identifies biological impoverishment, increasing pollution, and global climate change as the “megatrends” of environmental deterioration. Such threats, he argues, could best be met through an “eightfold way”: stabilizing population, eliminating severe poverty, developing benign technologies, embracing environmental economics, reducing and reorienting consumption, enhancing knowledge, instituting good governance, and–in “the most fundamental transition of all”–transforming human consciousness. Although the final recommendation is rather ethereal, the others are substantial. Of particular import, under the good-governance category, is the proposal for establishing a World Environment Organization (WEO). Ideally, the WEO would stand alongside such groups as the World Trade Organization and the World Health Organization to provide an institutional framework for addressing issues that demand global action.

Speth’s message is aimed widely, couched in the language of the broad church of U.S. environmentalism. Writing at times as a political centrist, Speth advocates market approaches to pollution abatement, celebrates the (admittedly rather rare) environmentally responsible corporation, excoriates state subsidies that encourage questionable activities, and acclaims many forms of high technology. Inclining ultimately to the moderate left, however, he comes down hard against the perfectly free market, finding promise rather in good governance, effective regulation, and international institution building. Nodding occasionally to the more radical left, he keenly embraces the bottom-up approach of grass-roots organizations and spontaneous movements, praising at times the antiglobalization movement.

Appealing to such a broad spectrum of environmentalism is perhaps politically savvy. Whether it makes for an intellectually coherent account, however, is another matter. When a single paragraph moves, with equal enthusiasm, from such a mainstream proposal as “green labeling” to the fiscally risky institution of “barter networks” before concluding with dreams of eco-salvation through a “cultural renaissance of poetry, storytelling [and] dance,” my doubts begin to grow.

More troubling is Speth’s tendency to paper over the many mutually exclusive viewpoints found within the environmental movement. It is one thing to advocate the preservation of biodiversity in order to maintain genetic stock for biotechnology, but it is quite another to expect assent from the antiglobalization protestors who are subsequently lauded for leading us into a “change of consciousness.” Any such transformed consciousness would, after all, recoil at the previously endorsed splicing of “spider genes into cows . . . [to] produce spider-web protein in their milk.” But does Speth really advocate genetic engineering, especially in such an extravagant form? Or is he merely willing to deploy it as a hypothetical reason for preserving biodiversity? Unfortunately, he seems unwilling to take a stance on controversial issues that might reveal and widen cleavages within the environmental community.

Contrastingly, but hardly surprisingly, Speth has no compunctions about taking on self-proclaimed environmentalists who have strayed outside of the fold by denying the severity of the crisis. Looming here is Bjørn Lomborg, whose “skeptical environmentalism” is viewed by many in the movement as little more than cornucopian antienvironmentalism. To his credit, Speth does not simply vilify Lomborg, as do many green writers, but instead empirically counters several of his soothing assertions of environmental health. Whether he does so in adequate detail, however, is unclear; I would think that Lomborg’s 500-page tome deserves rather more than a two-page rejoinder in such an important book as Red Sky at Morning.

The Lomborg issue, moreover, goes beyond contested assessments of ecological deterioration. The Skeptical Environmentalist makes an important subsidiary argument about data presentation, charging many prominent environmentalists with manipulating their statistics in order to twist the truth. Lomborg’s critics usually ignore, or at least sidestep, this part of his case, preferring to focus on the state of the planet. In a typical gesture, Speth dismisses all such allegations with an off-handed acknowledgement of “exaggerations and also honest mistakes in environmental advocacy.” But until I see Lomborg’s accusations receive the detailed rebuttals that they demand, I can only conclude that the problem goes rather deeper than that.

Cautioned by the Lomborg assault, Speth promises to avoid hyperbole. He usually keeps his pledge, but not always. Telling us that “a fourth of bird species are extinct,” Speth implies that these losses are recent, brought about by the current eco-calamity. That is hardly the case. What about the avian holocausts that followed Polynesian settlement on island after island across the Pacific? Not fitting within the standard litany, they apparently cannot be mentioned. At times, it seems as if Speth has a vague conception of the historicity of nature, tending to view the preindustrial world as an Edenic wonder. “The last great extinction episode occurred sixty-five million years ago with the obliteration of the dinosaurs,” he informs us, neglecting the inconvenient fact that some 85 percent of all large mammal species in the Western Hemisphere were exterminated, quite likely by Paleolithic humans, at the end of the Pleistocene Epoch. And in a telling phrase, Speth writes of Earth losing “a third of its original forest cover.” But when could this time of “origination” possibly have been? Human societies have been removing forests since the Neolithic, when global biomes were being transformed and relocated by early Holocene global warming.

But such criticisms are perhaps unfair, considering the intended function of the book. If one accepts that we do indeed face a global environmental crisis, one may easily forgive inconsistencies and exaggerations in a work designed to rally the faithful and counter the opposition. Why focus on the environmental movement’s missteps and fault lines, one may ask, when so much is at stake?

If viewed on its own terms, the book works well enough. Yet even in this regard, its message is weakened by one baffling omission: the current global military situation. Red Sky at Morning appears to have been written in an environmental bubble in which the events of September 11, 2001, and the responses that they received have no significance. In a book focused on the global condition, such an unwillingness to recognize the environmental reverberations of international conflict seems obtuse. It also squanders the opportunity to draw attention to the close potential linkages between U.S. foreign policy reform and environmental sustainability.

As has often been argued, U.S. military strategy often seems to partly follow U.S. energy requirements, which in turn are rooted in our settlement patterns and help determine our environmental policies. Wedded to a system of hypersuburbanization and unfettered individual mobility, we demand cheap gasoline and therefore balk at any reduction of carbon emissions. Ensuring plentiful and secure oil, in turn, seems to necessitate a tight alliance with Saudi Arabia: a country that apparently recycles petrodollars into fundamentalist and sometimes terror-linked madrasas across the Muslim world, and in which theocratic repression helps cooks the pot of fanatical anti-Americanism. Meanwhile, U.S. military adventures elsewhere in the region, aimed at quelling such tensions and securing alternative oil supplies, have not proved successful. With these considerations in mind, a security-linked “green” energy policy, based on conservation and on renewable sources, might be easier to sell to the U.S. public than we have hitherto thought.

A far-reaching reformed energy policy would demand major changes in our urban organization. As Speth recognizes, “smart growth” based on high-density infill development along public transportation corridors is the most sensible option. But here again, one must confront the internal paradoxes of U.S. environmentalism. Certainly in California’s Bay Area, every time a “smart” initiative is mooted, local neighbors rise up under a green banner to fight the good fight against the greedy developers who would pave over their favorite vacant lots and crowd their sidewalks. Exasperated builders, attempting to address a housing shortage that has pushed median prices over the half-million-dollar mark, must thus look elsewhere. They find it much easier to pave instead the farmlands of the northern San Joaquin Valley, linked to the Bay Area’s jobs by freeways perpetually clogged with SUVs.

But let us environmentalists not notice anything as awkward as all of that. It is so much safer and more satisfying, after all, to attack our common enemies.