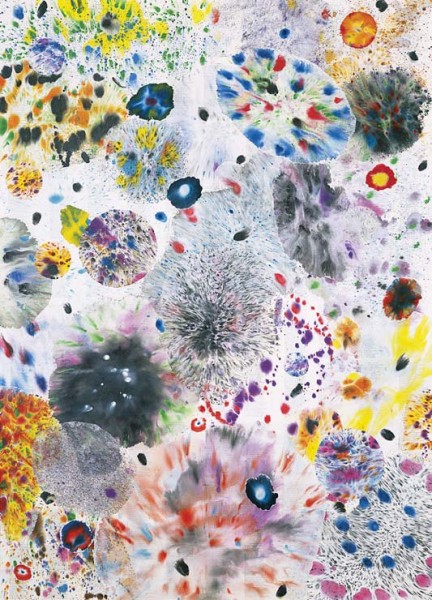 TIM ROLLINS + K.O.S. AND BANNEKER HIGH SCHOOL PARTICIPANTS, On the Nature of the Universe (after Lucretius), Watercolor, acrylic ink, India ink, aqaba paper, collage, and book paper on canvas, 76 x 54 inches, 2005. (From the collection of the National Academy of Sciences)

On the Nature of the Universe (after Lucretius)

Tim Rollins, a conceptual artist and teacher, established an after-school art workshop in 1982 for teenagers whose schools classified them as learning disabled, dyslexic, or emotionally handicapped. The self-named K.O.S. (Kids of Survival) is an evolving group of these teens who regularly attend Rollins’s workshop in New York’s South Bronx. The group’s artworks are included in the permanent collections of more than seventy major museums, including the Hirshhorn Museum and Sculpture Garden and the National Gallery of Art in Washington, D.C., and the Whitney Museum of American Art in New York City.

The National Academy of Sciences commissioned Rollins to lead a three-day workshop with students at Benjamin Banneker High School, a math and science magnet school in Washington, D.C., known for academic excellence and highly motivated students. During the workshop, participants created the artwork pictured here based on their study of Lucretius’s ancient didactic poem On the Nature of the Universe. In this epic, written in the first century B.C., the poet aims to free humanity from its superstitions and fears about death and celebrates the teachings of Epicurus, a Greek theorist who believed that the cosmos was comprised of atoms.