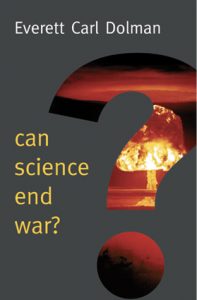 Imagine the scene: you’re Everett Dolman, a faculty member at the US Air Force’s School of Advanced Air and Space Studies with significant security and military experience, and an eager publisher suggests the book title of Can Science End War? What do you do with such a naïve suggestion?

To his credit and without unnecessary prevarication, Dolman provides the answer on page six of the book: “The bottom line is that science cannot end war, for science is less an ideology than a tool. It serves those who use its methods.” At which point the reader observes that the book has barely begun, and can’t help but wonder what the rest of the pages are for.

But before exploring that question, consider the publisher’s choice of title for a moment. To begin with, “science” is not really the relevant domain if one wants to explore war, because science is, as Dolman points out, a “way of knowing”—as well as, occasionally, an ideology that raises applied rationality to theological levels. War, as writers from Sun Tzu and Machiavelli onward have pointed out, is not a process that can be explained or managed through the use of applied rationality: there is no “science of war.” At the height of the Enlightenment, theorists such as Carl von Clausewitz and practitioners such as Helmuth von Moltke emphasized the “fog of war” and the interplay among politics, personality, and armed forces. Even Antoine-Henri Jomini, the contemporary of Clausewitz considered by many to have made the most rigorous effort to capture war in a rational, rule-based theory, never pretended war was predictable; indeed, he explicitly noted that war was not a science, but an art.

Although warfighting strategies, not surprisingly, reflect the knowledge and zeitgeist of their times, there is no “scientific” theory of war, even in periods like today, when the scientific discourse dominates all others. Thus current thinkers such as John Boyd, who have been called “post-modern military strategists”—a great term, that—and who integrate a lot of modern science into their thinking, don’t make war out to be either “scientific” or “rational.” That doesn’t mean that a good general can’t fight a war more successfully than a bad one or that officers can’t be taught how to think about conflict productively, but it does mean that war is a complex adaptive system. Any internally coherent and rational perspective on war, useful as it may be, must therefore also be partial, arbitrary, and inadequate in the event. So, no science of war.

Further confusing the titular question, science isn’t deployed on the battlefield, technology is. There was certainly deep science behind the Manhattan Project, for example, but it was technology that was tested in the desert in New Mexico in July 1945 and it was technology that was subsequently dropped on the Japanese cities of Hiroshima and Nagasaki. Earlier, technological advances in metallurgy and cannon manufacture, along with gunpowder innovations that made it more stable and transportable, enabled French artillery in 1495 to breach the previously impregnable Italian fortress of Monte San Giovanni and march down the spine of Italy. Technology helped Europeans, faced with this stunning power of mobile cannon, to redesign their fortresses to be resistant to them in a matter of a few decades. Technologies, not science, are where the rubber meets the battlefield.

There is also the question of what “war” actually means today. Russia successfully invaded Crimea in 2014 using information techniques and technologies that never rose to a level of “war” sufficient to justify a kinetic US or NATO response. Some Chinese strategists espouse a doctrine of “unrestricted warfare,” which explicitly de-emphasizes violence in favor of long-term cultural, economic, and technological conflict. Probably the most important confrontation today is the cyber conflict between China and the United States. This conflict has very few of the traditional characteristics of war and is invisible to most of the public of both nations.

Harvard political scientist Joe Nye and others have suggested that much conflict today involves “soft power,” the ability to get what you want because people admire your culture, your laws, and the model you set for others, rather than because you have a large military. At the other end of the spectrum, a constant state of low-level violence that is not structured enough to be anything like traditional war characterizes parts of the Middle East and Sub-Saharan Africa. Some call this condition “neomedievalism”; foreign policy expert Sean McFate, in his book The Modern Mercenary, describes it as “durable disorder.” Violence, especially in those neomedieval environments where states are weak or failing, may be endemic, but many of today’s most difficult and intransigent conflicts are definitively not traditional military confrontations.

Finally, the title makes an obvious assumption that raises an important question: is war something that science, or we, should even try to end? In other words, is war bad? Clearly, war itself, especially for the civilians caught up in it, is a destructive and brutal process. But some thinkers, such as historian Ian Morris in his 2014 book War! What Is It Good For?, suggest that by creating strong states and international order, wars have overall made humanity safer and richer. This is a somewhat cheerier reflection of Thomas Hobbes’ Leviathan: large institutions such as states, even if they are autocratic and cruel, are preferable to the sort of random violence that parts of Sub-Saharan Africa and the Middle East suffer from today. One does not need to accept these arguments entirely to recognize that, like any complex human activity, the constellation of activities we call war does not fit easily into simplistic moral bins.

Given an incoherent titular question answered by page six, then, what does Dolman do for the rest of the book? In part, he expands on his page-six conclusion that science cannot end war in language that is clear and interesting. Because this is a short book—173 pages of content—he does not include a lot of detail, but he does provide a nice overview of the intersection of science (mainly technology) and war, emphasizing primarily Western examples.

Although the choice of topics to address reflects the author’s idiosyncratic experience and interests, it doesn’t result in a boring book. For instance, perhaps reflecting his area of interest, Dolman at one point suggests that science might help end war if space weapons and commercialization are appropriately developed and deployed. Even though this makes a good scenario, some might find the relatively short discussion unpersuasive given the seemingly inexhaustible human ability to convert new domains to old antagonisms.

Certainly cyber started out with similarly high hopes. Remember cyber libertarian John Perry Barlow’s “A Declaration of the Independence of Cyberspace,” written some 20 years ago? “Governments of the Industrial World, you weary giants of flesh and steel, I come from Cyberspace, the new home of Mind. On behalf of the future, I ask you of the past to leave us alone…. You have no sovereignty where we gather.” Alas for libertarian fantasies, cybercrime and cyberwar are defining fronts in geopolitical conflict today, and cyber realms are increasingly nationalized, criminalized, monitored, and militarized. Dolman does not make clear why, if space is to be commercialized and colonized and peaceful, it does not first have to face the struggle to determine which Leviathan will ensure the necessary order.

Another interesting tidbit is dropped when Dolman notes that “modern warfare is information warfare,” which was certainly borne out by Russia’s Crimea invasion. He concludes several pages later: “The singularity [Ray Kurzweil’s famous point at which technology becomes self-aware and self-replicating] has already happened, and it occurred in the recent past when the amount of data collected and stored became so large that new, unanticipated properties of human and computer interaction spontaneously emerged in the form of a new kind of intelligence.”

Especially given the rapid advances in deep learning artificial intelligence, and the critical role of cyber conflict in modern geopolitical maneuvering, this observation might be worth another essay in itself.

In short, this is a charming, worthwhile, and idiosyncratic extended essay that is well worth the modest investment of time and effort required to enjoy it. In return for an afternoon or two of pleasant reading, you get a little bit of history, a little bit of policy, a little bit of technocratic musing, and even a quick look at a future warrior, in the company of a knowledgeable companion. 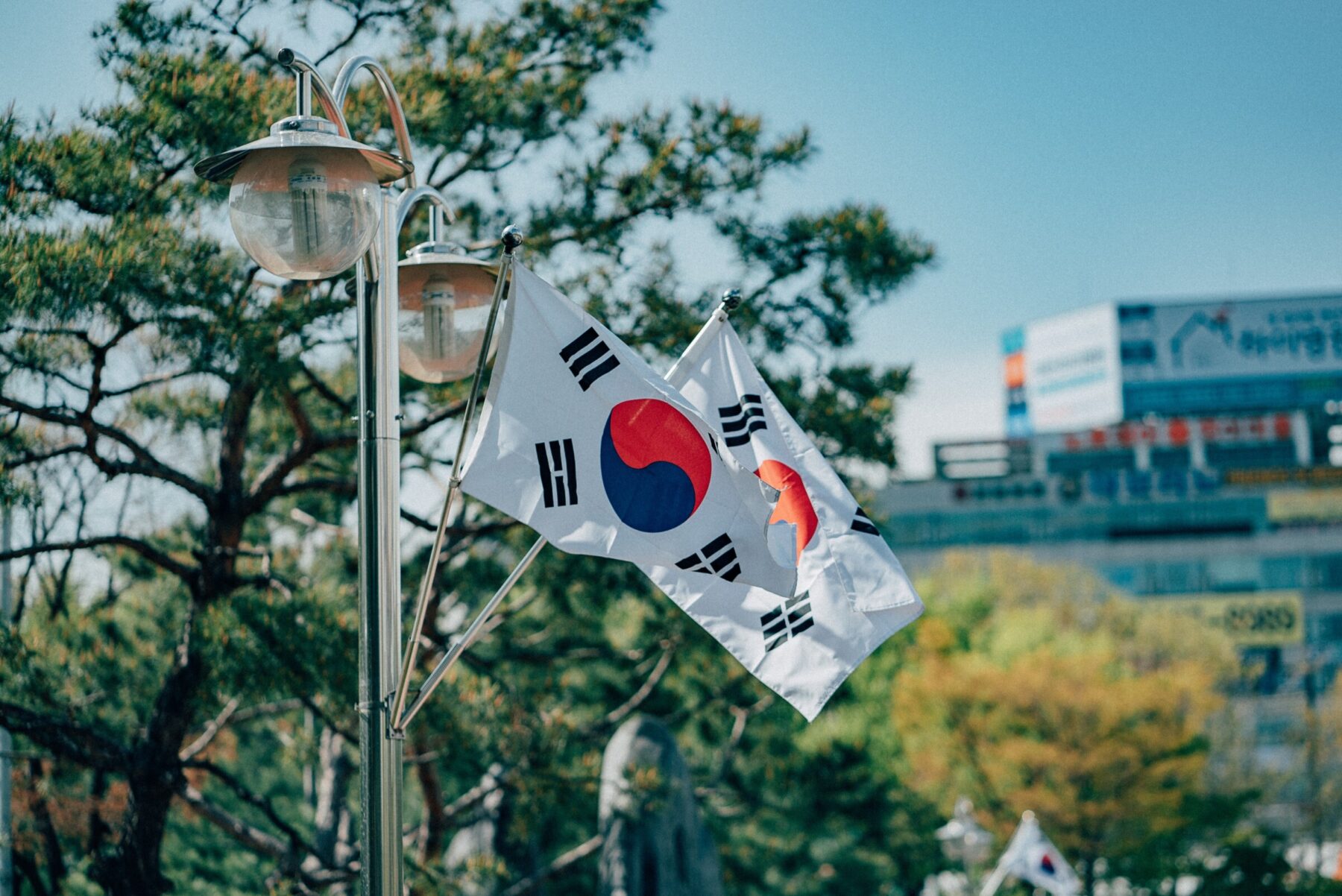 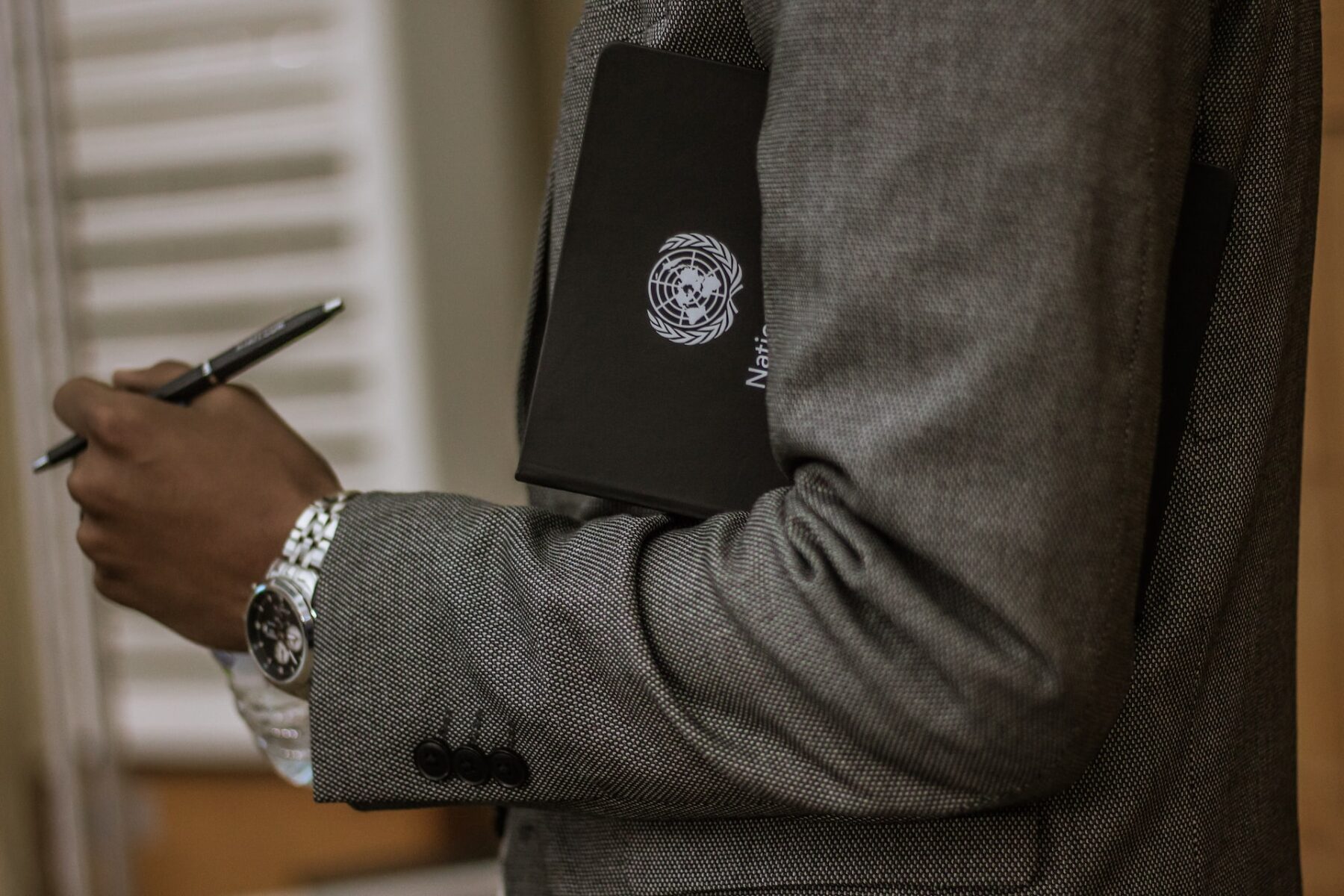 As the Biological Weapons Convention enters its 50th year, involving more nongovernmental organizations can help prepare for a future of weapons and wars that looks different from those the treaty was designed to prevent.