On July 18, the delegates to the Republican National Committee formally adopted the official 2016 Republican platform, which includes numerous policies and principles involving science policy issues. In regard to the environment, they promise to eliminate the current administration’s Clean Power Plan; prohibit the EPA from regulating carbon dioxide; finish the Keystone XL Pipeline; and promote transferring environmental regulatory power from federal to state jurisdiction. They consider climate change to be “far from this nation’s most pressing national security issue” and do not support international agreements such as the Kyoto Protocol or the Paris Agreement. The platform also argues that it is illegal to contribute to the UN’s Framework Convention for Climate Change and its Green Climate Fund due to Palestine’s status as a member state of the United Nations. The GOP supports developing all forms of marketable energy, including private sector development of prominent renewable energy sources; promotes lifting restrictions to allow for the development of nuclear energy; and supports protecting the national grid from an electromagnetic pulse.

The GOP platform also supports launching more scientific missions to space and policies aimed at guaranteeing that US space-related industries remain a source of scientific leadership and education. The platform also states that “Federal and private investment in basic and applied biomedical research holds enormous promise, especially with diseases and disorders like autism, Alzheimer’s, and Parkinson’s.” It recognizes that underserved demographic groups must be considered in advancing research in cancer and other diseases. They oppose embryonic stem cell research and human cloning for research or for reproduction, but do support research involving adult stem cells, umbilical cord blood, and cells reverted back into pluripotent stem cells. They promise to reform the Food and Drug Administration (FDA) and to address regulations that inhibit bringing new drugs and devices to market. They support the Right to Try legislation that would allow terminally ill patients to use investigational medicines not yet approved by FDA, and they endorse the Comprehensive Addiction and Recovery Act, which is aimed at overcoming the opioid epidemic.

On July 21, the delegates to the Democratic National Committee formally adopted the official 2016 Democratic platform, which includes a multitude of policies and principles related to science policy issues. It supports public and private investments in science, technology, research, and development. It advocates for allocating funding to develop diagnostic tests for the Zika virus, as well as for a vaccine and treatments. It states that the US Center for Disease Control and Prevention (CDCP) must have the resources required to study gun violence as a public health issue. To improve the nation’s cybersecurity, it calls for an expansion of the Obama administration’s Cybersecurity National Action Plan.

To combat climate change and protect the environment, Democrats state they will implement and expand pollution and efficiency standards, including the Clean Power Plan, and will meet the goals of the Paris Climate Agreement. They plan to eliminate certain tax breaks and subsidies for fossil fuel companies and to expand tax incentives for energy efficiency and clean energy companies. They plan to reauthorize Environmental Protection Agency regulation of hydraulic fracturing. Democrats propose implementing safeguards to protect local water supplies and to eradicate lead poisoning. They plan to expand clean energy research and development. They oppose the Keystone XL Pipeline, drilling in the Arctic and off the Atlantic coast, and attempts to decrease the effectiveness of the Endangered Species Act.

The Democrats plan to promote a number of policies to protect the health of US citizens, including fully funding the National Institutes of Health (NIH). They plan to fight the drug and alcohol addiction epidemic, especially the opioid crisis, through prevention and treatment efforts. And they propose setting a cap for the amount Americans
must pay out-of-pocket each month on prescription drugs.

The Democrats also oppose the proliferation of nuclear, chemical, and biological weapons and support decreasing spending on nuclear-weapons related programs. They support the National Aeronautics and Space Administration and promise to launch new missions to space. They also promise to ensure all students have the chance to learn computer science by the time they graduate from high school.

With the looming end of the fiscal year (September 30) and the upcoming election (November 8), Congress still has a long way to go to wrap up FY 2017 appropriations. None of the twelve annual spending bills have yet been signed into law, and few have been approved by either chamber. To avoid a government shutdown, Congress will have to pass a continuing resolution that will punt funding decisions at least until late fall so that it can continue to grapple with lingering floor fights over policy riders on everything from abortion to Zika.

In spite of these now-standard obstacles afflicting the process, forward movement has not been totally absent. Both the House and Senate Appropriations Committees wrapped up work on their twelve annual spending bills before hitting the annual summer recess in mid-July. Assuming Congress eventually agrees on an omnibus spending package, the outcomes of this work will shape that debate. With that said, here are some brief observations on where things stand for science in early September.

Overall R&D budget figures are predictably modest—with the exception of the National Institutes of Health (NIH). The spending caps reached in the FY 2016 budget deal were inevitably going to limit the upside for science funding this appropriations cycle. Under that deal, discretionary spending, which provides most science and technology funding, is essentially flat in FY 2017. 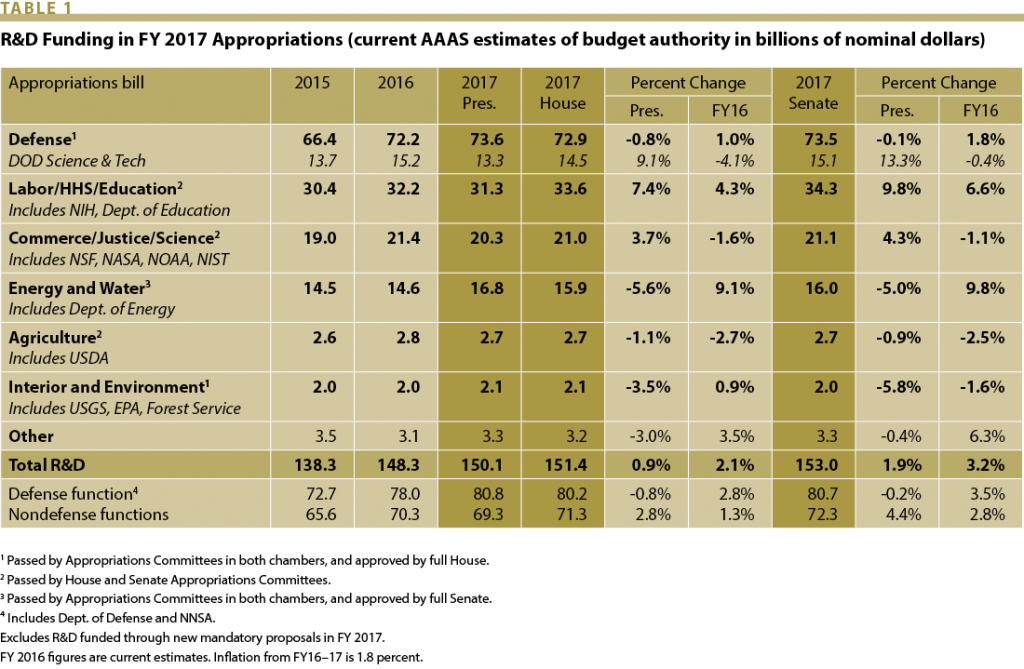 Overall budget tightness is reflected in most spending bills (See Table 1). Barring a significant change, the nondefense R&D budget, which includes the National Science Foundation (NSF), the National Aeronautics and Space Administration (NASA), and others, wouldn’t change much in FY 2017, with an aggregate 1.3% increase in the House and a 2.8% increase in the Senate, according to current AAAS estimates (compared to a rate of inflation of 1.8%). On the defense side, the data appear to show the National Nuclear Security Administration (NNSA) with a major boost in FY 2017, but this is partly due to a large, unexplained drop in R&D funding reported for FY 2016. That drop does not reflect what actually happened in the underlying appropriations accounts, which were increased by Congress last year, and thus may be an accounting oddity. The Department of Defense (DOD) would see little R&D change overall, though Senate appropriators were more generous than their House counterparts in supporting DOD science and technology. Heated debates over use of the Pentagon’s war funds seem to have had only limited impact on the R&D bottom line.

The significant outlier to all this, of course, is the NIH, which has received a billion-dollar increase from House appropriators and a $2-billion increase in the Senate. These sizable increases would seem to ensure that NIH will finally return to pre-sequestration budget levels and pull up the overall R&D budget numbers in the process.

Although Congress hasn’t been particularly generous, it has in fact protected research funding. Based on appropriations decisions so far, the federal research budget for FY 2017 will likely end up around $3 or $4 billion higher than the administration had requested. The president’s request had proposed billion-dollar cuts to the base budgets at NIH and NASA, and a 9% reduction in DOD basic research. This collectively would have meant a small reduction for applied research funding and a deeper cut for federal basic research overall. Appropriators have mostly rejected these proposals: beyond the aforementioned NIH boost, NASA appears set up for a small increase, and appropriators in the Senate (but not the House) turned away the proposed DOD cut.

When the administration made its request for cuts in science funding from the discretionary budget, it attempted to offset the cuts by requesting that there be more than $6 billion in R&D support that would be considered mandatory spending, in the same category as Social Security and Medicare.

This extra funding may have made the numbers look better in the aggregate, but reaching for mandatory spending was a long shot, in the same way that earlier proposals to blow past the discretionary budget caps were also longshots. Congressional leaders have rejected this mandatory funding approach. Instead, they selectively increased discretionary funding for NIH, NASA, and DOD, but left R&D funding at other agencies essentially flat. It has also meant that some priorities tied to new mandatory spending in the president’s budget—perhaps most notably the Cancer Moonshot and the National Network for Manufacturing Innovation—have received virtually no funding.

Climate, environment, and energy funding conflicts remain in place. One can probably bookmark this paragraph and return to it every year: the partisan funding cleavages over climate science and energy technology remain particularly strong. The administration had once again proposed major increases for renewable energy and climate- and environment-related research across several agencies, while reducing net new funding for fossil energy R&D. Once again, Congress has rejected these proposals. House Republicans have shown opposition across the board. In some cases Senate Republicans (along with their Democratic colleagues) have sought middle ground between the two, though Senate appropriators also have clear preferences on, for instance, Environmental Protection Agency science and technology funding, nuclear power technology development (funded by the Department of Energy), and NASA’s Earth Science program. Budgeting is a negotiation, and clearly the administration hasn’t found the right offer to appeal to its congressional foils on its low-carbon technology plans.

Science and technology funding can at times be an innocent bystander during larger budget and policy fights, and this year is an example of that, as multiple spending bills with majority support have been hit with controversial policy riders. These have included language on Iran (the Energy & Water bill); gay rights (Energy & Water); gun control (Commerce, Justice, Science); and Planned Parenthood and confederate flags (Zika bill, itself attached to a transportation/veterans package), among other items. Debates over policy riders have slowed the budget process and are one factor contributing to the need for a continuing resolution. And the length of any continuing resolution will also be contentious, as members of Congress consider how the results of the upcoming election will affect the relative strengths of the parties.

A recently released survey by the Pew Research Center revealed that the general public is more worried than enthused about the use of biotechnology to enhance human ability. The survey questioned them on the use of gene editing for reducing risk of disease in babies; utilizing brain chips for enhancing cognitive ability; and using synthetic blood for improving physical abilities. The results showed that survey participants “would be ‘very’ or ‘somewhat’ worried about gene editing (68%), brain chips (69%), and synthetic blood (63%).”

The Food and Drug Administration gave the regulatory greenlight to a proposed experimental release of genetically engineered mosquitoes in Key Haven, Florida. The experiment will test the ability of genetically engineered male mosquitoes to suppress the local population of Aedes aegypti mosquitoes. The wild mosquitoes have been linked to the first cases of locally transmitted Zika infections in the continental United States. The agency declared that the experiment poses no significant impact on the environment. Still, the final regulatory action does not clear the way for the field test, as permission to move forward awaits the outcome of a referendum vote by the Key West residents on November 8.