The Value of Sub-baccalaureate Credentials

Students, their families, and taxpayers invest in higher education for a variety of reasons. But one of the most-cited by students is that postsecondary education is an investment that leads to better jobs and higher wages. Through this lens, the return on investment (ROI) is central to discussions of the value of postsecondary education and the measurement of student success. Because ROI is driven by how much time and money students invest in attaining a credential, policymakers, students, and their families are paying increasing attention to the labor market success of students after gaining that end product. This is not surprising, because earnings are the “return” side of ROI calculations.

The costs of postsecondary education continue to escalate far faster than inflation. Indeed, since the late 1990s, the rate of tuition increases has been roughly twice the rate of inflation. Stories of the crushing burden associated with student debt continue to gain attention. And the failure of many students to launch adult lives and careers after earning bachelor’s degrees now attracts attention. Together, these issues have led many people to question the value of the bachelor’s degree, the most common postsecondary credential awarded in the United States.

Simply put, these issues lead to two questions: Do bachelor’s graduates earn enough to justify the time and money spent getting the degree? Are there more efficient ways to earn a postsecondary credential associated with middle-class earnings?

Even as these questions mount, the bachelor’s degree is still a good investment for most students, leading to higher rates of employment and higher wages for graduates as compared with peers without a bachelor’s degree. But not every student has the time, money, skills, or inclination to complete the degree. And detailed data from many states show that labor market success is possible without a bachelor’s degree—assuming that a student’s postsecondary credential is technically oriented and that at the end of his or her training a student can fix things or can fix people.

As Table 1 makes clear, students, the ultimate consumers of postsecondary education, are incorporating this information into their enrollment decisions. More and more students are enrolling in sub-baccalaureate training programs. Indeed, in 2013, the latest year for which national data are available, the number of sub-baccalaureate credentials awarded, close to 1.65 million, was approaching the 1.84 million bachelor’s degrees awarded that year.

But what is the value of these sub-baccalaureate credentials? How do they stack up against the bachelor’s degree and against one another? Do some lead to higher earnings than others? To answer these questions, it is useful to examine detailed wage data gleaned from state data files.

Through College Measures, I have worked with a number of states to measure the earnings of students after they have completed a postsecondary degree or credential. The states examined include Arkansas, Colorado, Florida, Tennessee, Texas, Virginia—and soon Minnesota. These states were selected because they have merged student-level data on degrees, programs of study, and institutions with wage data drawn from their state unemployment insurance systems. (It should be noted that no national data set allows the analysis of wage outcomes by program across the range of public institutions captured in state data systems.)

Here I focus on data from just two partner states, Texas and Colorado. However, the patterns that emerge are commonly found in the data from other states (see www.collegemeasures.org/esm). As with most of College Measures partners, these two states report wage outcomes for graduates at several time points after students complete their course of study: usually 1, 5, and 10 years after completion.

Overview information on first- and fifth-year wage outcomes is included in a few of the following tables, to show early career outcomes. However, my emphasis is on longer-term outcomes as a more accurate reflection of the overall returns associated with a postsecondary education. Moreover, many observers argue that bachelor’s graduates, especially those with traditional liberal arts majors, take longer to launch careers, so that using early post-completion earnings may produce a biased picture of the value of these degrees.

Medians show central tendencies. Far more important is the variation in the wages associated with credentials from different fields. The next set of tables shows the wages at the 10-year mark for completers of some of the sub-baccalaureate programs with the highest and lowest median wages. Also reported are the median wages of bachelor’s graduates. (Since we are measuring the wages of individuals after completion, a per-capita measure is desirable, compared with, say, median household income.) For perspective here, the median per-capita income in Texas in 2013 was $26,000. 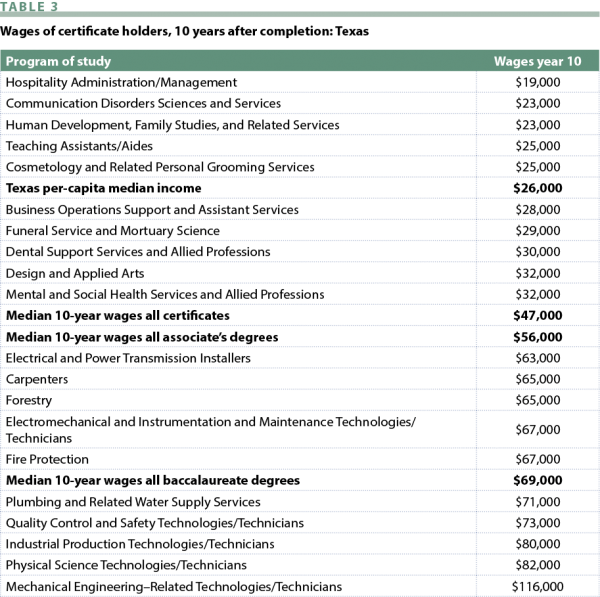 In short, some certificates have considerable market value and can lead to middle-class wages. One of the key distinguishing characteristics of high-paying certificate programs is that almost all provide skills designed to fix things. Four of the five certificates with the highest wages have the word “technician” or “technologies” in their program name, and the fifth program is associated with water supply and plumbing (also a field oriented toward making things work).

Colorado’s story is somewhat different, partly because the detailed data are somewhat different. As in Texas, Colorado reports median wages 1, 5, and 10 years after completion for sub-baccalaureate credentials and also for bachelor’s graduates. But it is also possible to distinguish between the wages associated with shorter- and longer-term certificates. Colorado data also cover two different types of associate’s degrees: the transfer-oriented associate’s of arts/sciences (AA/AS), and the career/technically oriented associate’s of applied sciences (AAS). Results are presented in Table 4.

In Colorado, in the long run a bachelor’s degree is, on average, a good bet. Ten years after completion, the median wages of all bachelor’s graduates are higher than the median wages of students who completed any of the sub-baccalaureate credentials noted. However, graduates with the career/technically oriented AAS degree have the highest median wages both one and five years after completion. At year 10, these techies are only about $1,000 below the median wages of bachelor’s students. In contrast, the annual wages of graduates entering the labor market with the transfer-oriented AA/AS degree lag others substantially. And contrary to some other research suggesting that longer-term certificates have more market value than shorter-term ones, in Colorado the reverse is true.

Comparing Texas and Colorado shows that there may be few national lessons in identifying specific postsecondary credentials of value. State labor markets vary considerably, so identifying high-earning credentials may require detailed data about both the field offering the credential and the state offering it. A variant of the late Thomas “Tip” O’Neill’s famous quip that “all politics is local” is that maybe not all the value of postsecondary education is local, but a lot of it is.

How do wages compare by the subarea in which the degree or credential was earned? In Colorado, the per capita income in 2013 was $31,000. As shown in Table 5, completers from three certificate programs (Human Development, Family Studies, and Related Services; Teacher Education and Professional Development; and Cosmetology and Related Personal Grooming Services) have median earnings below the state per capita income. At the other end of the scale, completers in four programs (Industrial Production Technologies/Technicians; Computer/Information Technology Administration and Management; Precision Metal Working; Criminal Justice and Corrections; and Fire Protection) had median wages higher than the median of bachelor’s degree graduates, and completers with certificates in Management Information Systems and Services had median wages equal to those of bachelor’s graduates. As in Texas, many of the programs that produce students with the best wage outcomes study technology or its application (more detailed Colorado data, including patterns for longer-term certificates, can be found at http:\\co.edpays.org). 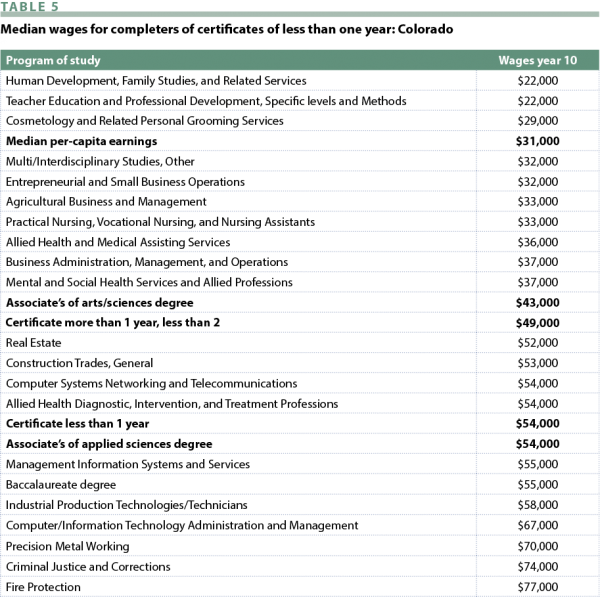 Colorado students pursuing the AA/AS degree are all classified in a single program of study: Liberal Arts. In contrast, students pursuing the AAS degree are enrolled in many different programs of study. As the wage data in Table 6 for graduates from different AAS programs across Colorado and for completers of bachelor’s degrees and certificates shows, the AAS degree overall has market value. Median wages 10 years after completion fall just slightly below the median wages for all bachelor’s graduates, topping the median wages of AA/AS graduates by more than $11,000 and substantially outstripping those of certificate holders. Note that short-term certificate holders, AAS graduates, and bachelor’s graduates all earn roughly the same median wages. 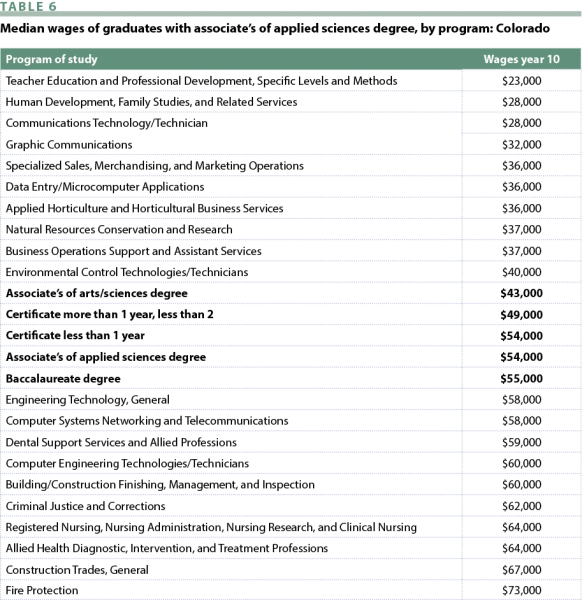 Collectively, all of these data point to substantial earnings variations across fields of study. The AAS degree in teacher education has very low market value. Graduates with a degree in human development, a perennial low-paying credential, have higher median wages than those with the teacher education AAS, but still quite low. Of the highest-paid graduates, the “fix something, fix people” rule holds. Nursing and allied health are high-paying programs, as are construction and engineering programs.

Alternative paths to the middle class

That said, every state’s labor market is unique. Indeed, data available from College Measures show that although many technically oriented sub-baccalaureate credentials have high market value, the return on specific credentials depends partly on where workers live. (Which institution granted the credential can matter, too, but that’s another story and another data set.) The strong implication here is that the nation needs better information about the success of postsecondary students after they leave college. Only with these detailed data can students and policymakers better decide which postsecondary credentials yield the best ROI. And these data must be at the program level, not the institution level.

Although many technically oriented sub-baccalaureate credentials have high market value, the return on specific credentials depends partly on where workers live.

As the value of the bachelor’s degree comes under increasing scrutiny, new forms of competition are emerging. Not coincidentally, these competitors are proliferating just as the concern about the disconnect between the bachelor’s degree and student success in the labor market is accelerating. Many of these emerging alternatives—such as massive open online courses, badges, nanodegrees, competency-based education, coding boot camps, and the like—have garnered a great deal of attention in the press. Accrediting such alternatives (and making students enrolled in them eligible for federal student aid) will be a particularly large issue. However, Congress seems to be willing to consider new alternatives to the traditional system. Of particular note is a recent white paper by U.S. Sen. Lamar Alexander (R-TN) on accreditation, Higher Education Accreditation Concepts and Proposals, released in March 2015 as part of the process of renewing the Higher Education Act (see http://www.help.senate.gov/imo/media/Accreditation.pdf).

Although these high-visibility competitors to the bachelor’s degree may over time unseat the primacy of the bachelor’s degree, the more traditional career and technically oriented training offered via certificates and associate’s degrees are right now producing hundreds of thousands of students each year who are going on to earn middle-class wages; and often earn far more than bachelor’s graduates.