Storm Clouds on the Career Horizon for Ph.D.s

When I was about to graduate from college in the late 1980s, I went to the office of my favorite economics professor to ask about the job prospects for Ph.D.s in economics. My professor told me that there would be increasing demand for faculty, because substantial numbers of professors were expected to retire in the coming decade. He encouraged me to go to graduate school, and I did so because academic jobs would be plentiful. When I became a faculty member, I was asked the same question. Unfortunately, I cannot share an optimistic outlook for academic jobs with today’s students. In 1994, mandatory retirement for faculty was eliminated, reducing the retirement of tenure-track faculty. And when professors finally did retire, universities often replaced them with adjuncts at low salaries. These employment practices significantly changed academic employment prospects. An uncertain funding environment, driven by a reduction in state support for public higher-education institutions and falling federal investments in science, compounds these problems.

When researchers and policymakers discuss academic science, they typically combine all the fields of science, technology, engineering, and mathematics (STEM) into a single category. Yet this degree of aggregation masks important variation across academic disciplines in market structure. In the research I have done with Shulamit Kahn on women’s scientific careers, we have argued that each scientific discipline constitutes a separate labor market. Merging all these fields under the single rubric of STEM provides an inaccurate picture of academic science and muddies the policy discussion, because the issues faced in one market are not the same as those confronting another.

Disaggregated data are available from NSF’s Survey of Earned Doctorates (SED), which collects information each year from those just completing a Ph.D., and its Survey of Doctorate Recipients (SDR), a biennial longitudinal survey of a sample of U.S.-trained Ph.D.s. For the purposes of this article, I separated STEM into four broad disciplines: life sciences, which include biomedical, agricultural, and environmental sciences; physical sciences, which include chemistry, physics, geoscience, mathematics, and computer science; social science, which includes psychology and social sciences; and engineering. I used the SED to examine Ph.D. production and repeated cross-sections of the SDR surveys to examine academic and nonacademic employment, and tenure-track and non–tenure-track employment, within the four broad academic disciplines. 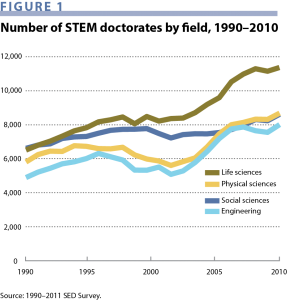 U.S. universities granted 23,823 Ph.D.s in 1990 and 36,654 in 2011. As Figure 1 illustrates, growth was not consistent across disciplines and not steady within disciplines. Figure 2 shows that the differences among the fields are even greater when one looks at career paths. 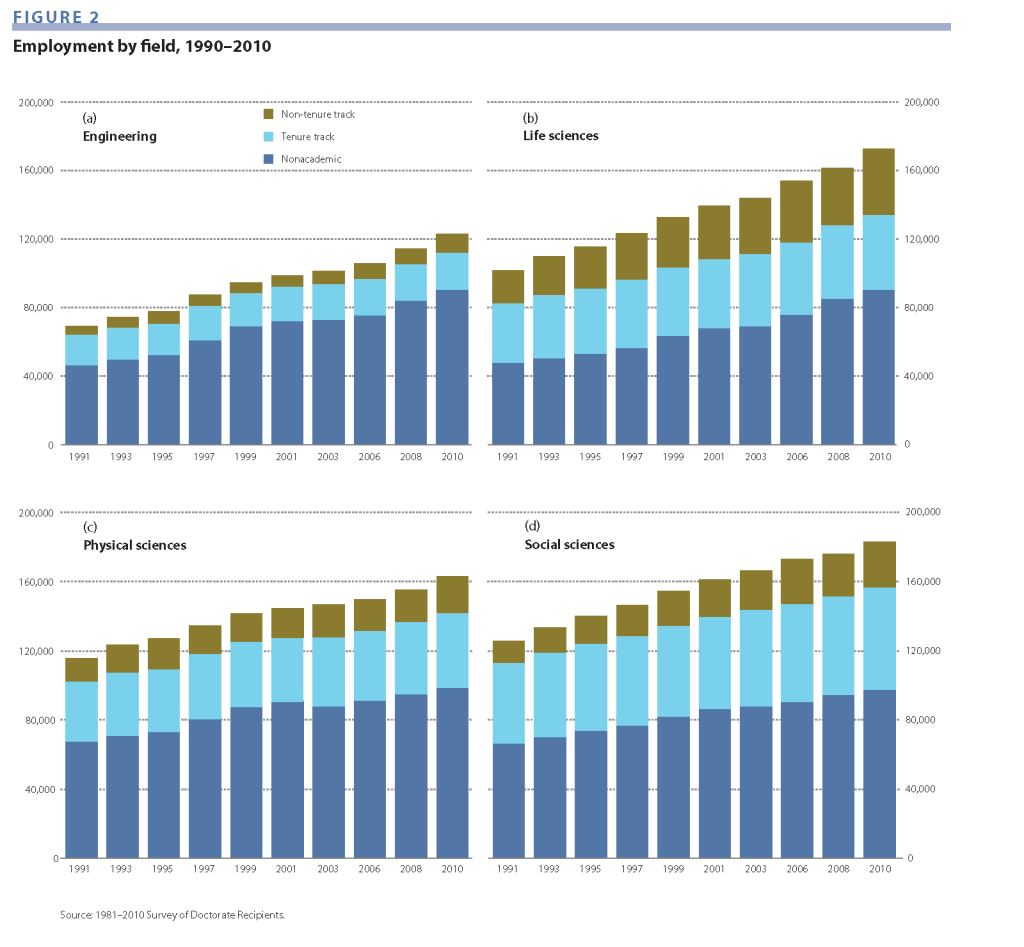 In the physical sciences, there are about 1.5 nonacademic jobs for each academic position. The ratio of tenure-track to non-track positions in academia has fluctuated between 2.5 and 2.0 in the past two decades.

The academic/nonacademic split is roughly even in the social sciences, and the ratio of tenure-track to non-track positions has declined from 3.7 in 1990 to 2.2 in 2011.

The growth rate in the number of tenure-track academic positions between 1990 and 2010 is consistent across the disciplines, ranging between 20% in engineering and 27% in the life and social sciences. In contrast, the growth rate in Ph.D. production differs considerably: 75% in the life sciences, 64% in engineering, 49% in the physical sciences, and 30% in the social sciences. Only in the social sciences is the rate of growth in academic positions close to the rate of growth in Ph.D. production. All other fields have Ph.D. production outstripping tenure-track employment growth. Where do these excess scientists end up?

They become employed in either non-track academic jobs or the nonacademic sectors. Non-track academic jobs have increased by 50% in the physical sciences and doubled or more in the rest of the disciplines. The nonacademic sector has shown the fastest employment growth for Ph.D. recipients, growing by 75% for physical science, 260% in engineering and social science, and 320% in life science fields.

Postdoctoral training is a problematic practice that seems impervious to repeated calls for reform. Since 1969, the National Academies has produced reports calling for reforms to the postdoctoral system, and many of these reports repeat the same recommendations of increasing pay, providing benefits, and limiting the term of training. Some progress for postdocs is finally being made. I was part of the Advisory Committee to the Director of the National Institutes of Health (NIH) Working Group on the Biomedical Workforce. Our report reviewed the postdoctoral system for biomedical doctorates and recommended reforms that NIH has begun to implement. These include increasing postdoctoral stipends, increasing the number of early-independence research awards, and modifying training programs to expand career opportunities. Many of these changes were adopted only in 2014, and it remains to be seen whether they will have a significant impact on the postdoctoral experience.

Taken together, these employment trends have important implications for doctoral students and their advisers. Faculty often encounter students who want to be just like them: tenure-track academics. Faculty oblige by preparing students for these increasingly elusive tenure-track jobs. Although unemployment rates for individuals with STEM discipline Ph.D.s are very low (2.6% in 2010), Figure 2 illustrates that academia is not a growth industry, and tenure-track academia is stagnating relative to non-track academia and Ph.D. production. Shualmit Kahn and I found that among biomedical Ph.D.s who graduated in 2000, only 20% ended up in tenured or tenure-track academic positions within 10 years of the Ph.D. These are not encouraging results, and students need to know that the majority of doctorates in their graduating class will be employed in either non-track academic jobs or the nonacademic sector.

Even those who find a tenure-track position will discover that their future is uncertain. According to an article in the Proceedings of the National Academies of Science by Johns Hopkins University President Ronald Daniels, the young NIH investigator who was lucky enough to land one of the coveted tenure-track academic jobs will face even stiffer odds in landing an independent R01 research grant. The average age of the first R01 award, which has been creeping up for decades, finally seems to have stabilized—but at the relatively advanced age of 42. NIH was so concerned about the increasing age of first R01s grants and the low funding rates for young investigators that in 2008 it initiated the Early Investigator awards, which essentially fund early investigators near but below the payline. Daniels argues that these policies are not enough and that we risk losing a generation of scientists. Concerns about the aging NIH workforce has led Rep. Andy Harris, a former biomedical researcher, to propose legislation calling for a reduction in the median age of NIH investigators from 42 to 38 by the year 2025.

Since the end of World War II, the federal government has steadily increased its support for academic science. U.S. research universities have responded by co-producing scientific discoveries and increasing numbers of Ph.D. scientists. This process has been remarkably successful, but researchers such as Paula Stephan and Michael Teitelbaum have argued that our current system is on the brink of collapsing under its own weight. I agree with this assessment if we view science as beginning and ending with the university. My data show that tenure-track academic science is growing slowly and not absorbing the increasing numbers of doctorates produced.

However, in most STEM fields, doctorates in science work outside of academe. The nonacademic sector employs many well-trained scientists and provides a release valve for the increasing numbers of STEM Ph.D.s. Given the realities of scientific labor markets and funding uncertainties in higher education, political and academic leaders face a number of pressing questions: What policies should be enacted to ensure better outcomes for students? What public policies will further the scientific enterprise? What should we say to the prospective student who is contemplating a doctorate and an academic science career?

Policy changes may pave the way for changes in scientific training. Programs such as NIH’s recently created Broadening Experiences in Scientific Training (BEST) training grants, which prepare students for careers besides academic research, promise to better align Ph.D. production with the realities of the labor market. It remains to be seen whether the BEST grants fulfill their promise.

Furthermore, the Council of Graduate Schools (CGS) recommends professional development for all graduate students to prepare them for a broader range of careers outside of academia. Likewise, the CGS recommends tracking career outcomes of graduates by institution in order to provide better information to prospective graduate students. These policies are best practices and should be adopted widely by graduate programs.

Given the stark realities, how should we advise our prospective students? I would first be honest: Academic science is facing stiff headwinds and a turbulent funding environment. Tenure-track academia is stagnating despite increasing numbers of undergraduate and graduate students. The causes are multifaceted, ranging from the end of mandatory retirement to the increasing reliance of universities on the reserve army of underemployed adjunct professors. The likelihood of one of our students obtaining tenure-track academic employment has dropped considerably compared to when we were in graduate school. We are doing our students a disservice by training them to fit within the narrow and elusive confines of academia, when for most fields the majority of jobs are in the nonacademic sector. Students should know before they go to graduate school that their chances of becoming a tenured academic are very low. The decision about what to do is ultimately theirs, but it is our responsibility to ensure that they can make an informed decision.

Donna K. Ginther ([email protected]) is a professor of economics and the director of the Center for Science, Technology and Economic Policy at the Institute for Policy and Social Research at the University of Kansas.