In the 1999 film The Matrix, there is a wonderful scene between Morpheus, the leader of a rebel group, and Neo, who is destined to be the movie’s hero. Neo is dissatisfied, sensing something wrong with the world. Morpheus offers Neo a red pill that will allow him to experience the real world. As Neo reaches for the pill, Morpheus intones: “Remember: All I am offering you is the truth.” The red pill wakes Neo to the reality that the world he has “lived in” is merely a computer simulation, with humans actually sustained in liquid vats tied into a vast system harvesting their heat and bioelectricity. The truth revealed, Neo joins the rebellion to try to liberate humans from their machine overlords.

Karl Polanyi’s The Great Transformation is a kind of red pill for anyone interested in seeing more clearly the nature of contemporary American society. Once you read his book, or the very fine recasting of Polanyi in The Power of Market Fundamentalism: Karl Polanyi’s Critique, written by prominent social theorists Fred Block and Margaret Somers, you can never see the social world in the same way.

Karl Polanyi is the most important social thinker of the 20th century that you have (probably) never heard of. The Great Transformation was published near the end of World War II and was intended to influence grand policy on reworking the social compact among labor, capital, and the state. The reach of Polanyi’s argument accounted for the rise of industrial capitalism, the disruption of traditional social protections and the creation of new ones, the emergence of colonization, World War I, fascism, and World War II. The weakest element of his book is Polanyi’s projection, contained in the last chapter, of where democracy was headed. He anticipated the end of utopian beliefs in free markets, or what Block and Somers refer to as “market fundamentalism.” He definitely got that wrong!

Polanyi’s work is the earliest coherent statement of how free market ideology came to dominate the Anglo-American policy landscape. His contemporaries argued over economic models or advocated for free markets as the path to individual liberty. They were trapped within market-oriented worldviews that privileged Homo economicus as the purest expression of human nature. Polanyi stands out for tackling the illusion of Homo economicus and the centrality of markets to life, society, and freedom.

What does the world look like through Polanyi’s eyes? His own words form the best summary:

Our thesis is that the idea of a self-adjusting market implied a stark utopia. Such an institution could not exist for any length of time without annihilating the human and natural substance of society; it would have physically destroyed man and transformed his surroundings into a wilderness.

Polanyi’s was a moral perspective. He clearly sees that humans are not merely “labor” and that nature is not merely “land.” Yet free markets require such commodification, and that puts all of us on a path that, if followed to its logical conclusion, leads to a wasteland. This tension between markets and society creates a “double movement” whereby the state acts to expand the reach of the market while society, often through state intervention, works to limit the destructive powers unleashed by the market. 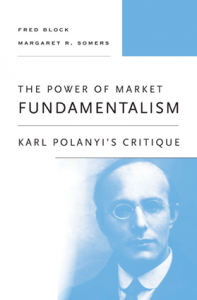 Think of this as a kind of social plate boundary, to draw an analogy from the geosciences, where the tensions between the demands of the market and the host society produce disruptive events. Geology finds earthquakes, mountain ranges, and volcanic activity at these boundaries. What human society has experienced, according to Polanyi, includes authoritarianism, global war, and economic depressions.

Polanyi’s analytical approach to explaining the unfolding of the Industrial Revolution in England and subsequent countermovements makes clear that states set all of the boundary conditions for markets. States enforce contracts, property rights, competition policy, innovation policy, trade, money supply, and on and on. In Polanyi’s view, the belief of extreme free market advocates—think of Friedrich Hayek and Milton Friedman—that free markets can lead to the end of politics is a destructive fiction. Without a state, a market cannot exist.

If The Great Transformation is a great book—and it is a great book—what is the point of the volume produced by Block and Somers? Polanyi wrote 70 years ago amid the disruption of World War II as an émigré from Austria to England and then the United States. He had little time to rework the book, leaving some elements half-formed, others somewhat contradictory, and some of his history and predictions just plain wrong. The Power of Market Fundamentalism: Karl Polanyi’s Critique represents a successful effort to redress these elements of The Great Transformation. The authors also update the work to make it more clearly relevant to American society in the 21st century. They do an excellent job of laying out Polanyi’s key arguments.

Block and Somers work to clarify Polanyi in, for example, their discussion of “embeddedness.” The authors point to ambiguities in Polanyi’s writing about the degree to which markets are, or can ever be, “disembedded” from society. Reviewing the evolution of Polanyi’s treatment of the relationship of market to society, they convincingly conclude that Polanyi sketched a theory of an “always-embedded market economy,” in which politics and social forces inevitably structure the organization of the market. If the market could ever achieve “escape velocity” in exploiting the fruits of society, both institutions would probably disappear.

In Polanyi’s view, the belief of extreme free market advocates—think Friedrich Hayek and Milton Friedman—that free markets can lead to the end of politics is a destructive fiction. Without a state, a market cannot exist.

The authors also address Polanyi’s treatment of the Speenhamland relief system that emerged in parts of England during the late 18th century. In that system, workers were provided an assured minimum income. By breaking the “natural” link between misery and effort, Thomas Malthus argued that rural workers were placed on a perverse path where reproduction would outstrip production. These criticisms, embraced by a Parliamentary Committee, were used to justify the move to the state-sponsored workhouse system of the 1834 New Poor Law.

Polanyi discovered a different Speenhamland perversion, emphasizing how assured income reduced the incentive of employers to pay decent wages, since the parish would make up the difference. He speculated that if the anti-union Combination Laws had not prohibited worker organization, wages might have gone up. In this historical detail, Polanyi found an important reason to avoid generalizations about perverse outcomes, when attempts to alleviate suffering caused by a market economy leave the intended beneficiaries worse off.

Block and Somers find both approaches to Speenhamland to be based on bad history. In their careful account, Speenhamland becomes an example of how free market ideology, wielded by figures such as Malthus and the economist David Ricardo, suppressed complex realities to weave a simple fiction blaming the poor for their own condition. Instead, the struggle to propagandize Speenhamland in the early 19th century sheds light on the shifting power between the gentry and emerging capital. Although the authors correct Polanyi, they do so in a way consistent with Polanyi’s approach.

The final chapters of Block and Somers’ work push Polanyi into the 21st century. The authors compose an exceptional chapter on modern American discourse around poverty and relief. By the time of the “Great Society,” Americans had largely abandoned the “perversity thesis” that policy intervention in “natural,” self-adjusting markets—in order to, say, ensure a minimum wage for workers—will inevitably result in bad outcomes. Block and Somers demonstrate how Malthus’s deductive arguments about human nature and perverse incentives have been revived since the Great Society programs. The writings of Charles Murray were highly influential in spurring welfare “reforms” embraced by both political parties in the 1990s. Americans now overwhelmingly believe (again) that welfare creates dependency in recipients, despite the total lack of empirical evidence. The power of such zombie ideas is astonishing. The claim remains a touchstone of conservative commentary any time there is social unrest in America’s “inner cities.”

The authors’ second “applications” chapter on the rise of conservative-movement politics is less successful. They lump all business interests together when there are plain differences between sectors. It is true that business is broadly aligned with the Republican Party, but core support comes from extractive and polluting industries (such as oil, gas, coal, and chemical manufacturers). Other powerful sectors, such as Silicon Valley and some parts of the financial industry, tend to line up behind Democratic causes. The authors also treat conservative-movement politics as separate from conservative business interests. Carefully disaggregating the business community opens the door to exploring connections to conservative-movement organizations. The Tea Party movement of the summer of 2010 was not entirely spontaneous but received money and organizational assistance from the Koch brothers (and probably others).

The final chapter is the least convincing. It attempts to sketch a path forward for democracy, as conceived by Polanyi. Although Block and Somers struggle with what democracy could be, the exercise feels removed from U.S. political realities. They offer no reason to believe that there will be a shattering of the visceral American belief that individual freedom lies in the market. Despite wrestling with why “market fundamentalism” retains such power in the United States, contrary to Polanyi’s original prediction, they are unable to persuasively show how a reimagining of democracy could occur.

The Power of Market Fundamentalism is an important book. It comes at a time when the rising concentration of wealth in the top 1% of American society is combined with an end to effective limits on campaign contributions. In the wake of the Citizens United v. FEC ruling, which removed restrictions on political spending, we are witnessing the spectacle of presidential candidates actively trying to line up their “own” billionaire to support primary campaigns. If democracies could have warning systems, that of the United States would be ringing very, very loudly. By reintroducing Polanyi’s analytical style and critique of market fundamentalism, Block and Somers have crafted a red pill for the 21st century.