Envious of several hundred years’ worth of advances in human understanding of the physical universe, some French thinkers, led by Auguste Comte, started clamoring in the early 1800s for pursuit of similarly rigorous mathematical insights into human behavior. They called these pursuits “social physics.”

Two centuries later, the days of social physics are drawing nigh. Arguably, the Isaac Newton of social physics is Alex “Sandy” Pentland, director of the Massachusetts Institute of Technology’s (MIT) Human Dynamics Laboratory and author of the first installment of his principia, Social Physics: How Good Ideas Spread–The Lessons from a New Science. This approachable and fascinating book pulls together years of Pentland’s work in the furtherance of Comte’s dream. Pentland, as did his forbearers, believes that researchers can derive “a causal theory of social structure” leading to “a mathematical explanation for why society reacts as it does and how these reactions may (or may not) solve human problems.”

The age of social physics is enabled by the digitization of information and the ease of capturing unimaginably large amounts of people’s activities that are revealed by tech gadgetry, credit-cards, and now m-money transactions, geo-location material captured by mobile devices, search engine queries, online browsing, social media activity, health records, and government data. For Pentland, social physics “is a deceptively simple family of mathematical models that can be explained in plain English and gives a reasonably accurate account for the dozens of real-world examples … including financial decision making…, ‘tipping point’-style cascades of behavior change, recruiting millions of people to help in a search, to save energy, or to get out and vote; as well as social influence and its role in shaping political views, purchasing behavior, and health choices.” 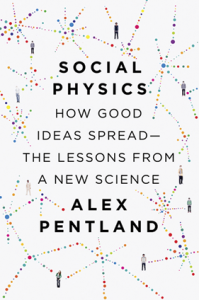 The most important research described here takes data-capture to another level. Pentland and colleagues have done a variety of “reality mining” experiments by giving people gizmos called “sociometers” that hang on a cord around their necks and track their movements, record their voices, and clock their interactions with others who are wearing similar badges. The millions (sometimes billions) of data points generated by these encounters generate something akin to a “god’s eye view” of the interplay of a particular bunch of actors.

Pentland is especially focused on two things: idea flow within groups that entails both exploration (finding new ideas) and engagement (getting everyone to coordinate their behavior), and social learning or “how new ideas become habits and how learning can be accelerated and shaped by social pressure.” And he provides abundant evidence that the data generated in this work illuminate such things as how ideas emerge in groups, who has influence, what social and personal traits are most helpful to groups, and how people behave in echo chambers of ideas.

One exploration of “collective intelligence” in groups found that the factors often extolled by experts, such as cohesion, motivation, and satisfaction, were not statistically significant in predicting how smart the group is. Instead, the largest factor in predicting group intelligence was the equality of conversational turn-taking; that is, groups where few people dominated the conversation were less collectively intelligent than those with a more equal distribution of conversational contributors. The second most important factor was the social intelligence of group members, measured by their ability to read each other’s social signals. He concludes, “Women tend to do better at reading social signals, so groups with more women tended to do better” on measures of collective intelligence.

These kinds of empirical insights really push the boundaries of much of traditional social science, which often frames research around social class, race, ethnicity, political groupings, and gender. This can be a good thing because contemporary life is often powerfully shaped by networked peer groups, which Pentland appropriately notes are organized around “shared norms” rather than just “standard features such as income” or “their relationship to the means of production.” I would refine this by noting that people’s personal networks are critical, too. Knowing about the size, diversity, and composition of a person’s network is a strong predictor of all kinds of things, including his or her political views, civic activities, consumer choices, spiritual passions, and hobby interests. My guess is that this personal network structure would also be a useful indicator in the kinds of things Pentland probes in his examination of idea flow and social learning.

Pentland believes that researchers can derive “a causal theory of social structure” leading to “a mathematical explanation for why society reacts as it does and how these reactions may (or may not) solve human problems.”

Then there is the dicey question of how insights gained from social physics might be used by policymakers or corporate managers. Pentland openly hopes the models will help produce “sensing cities” and “data-driven societies” and will inspire the reconfiguration of organizations that are hamstrung by their hierarchical structures. A small, mostly virtuous example: One Pentland study of a bank’s call center (which generated “tens of gigabytes” of data) showed that a modest change in the coffee-break schedule to give team members a chance to be together informally as a group yielded greater productivity to the tune of $15 million per year. Some skeptics, however, fret that formulaic implementation of social physics principles will reduce human agency and autonomy, producing a kind of hyper-“nudge” society that steers people as much as it liberates them.

It is clear that some kind of analytical structure of social physics is an inevitable part of the future. Society is entering the age of data and all the algorithms that go with the data. Pentland knows that his high hopes will work only if there is sufficient trust among the public that the data being collected are being used appropriately. He has championed a “New Deal on Data” that provides “workable guarantees that the data needed for public goods are readily available while at the same time protecting the citizenry.” The three planks that undergird this deal: You have the right to possess data about you. You have the right to full control over the use of your data. You have the right to dispose of or distribute your data.

He would implement this arrangement by data share through “trust networks”—that is, a computer network that keeps track of user permissions on personal data combined with a legal contract that specifies what can and cannot be done with the data. There would be enforceable penalties if the contract were breached. In effect, this New Deal on Data is Pentland’s “Bill of Rights” for citizens in a world where they are “outsourcing” some major elements of decision making to the masters of “big data.”

Pentland’s work is persuasive that a new science really is emerging in this data-drenched world. Moreover, the case he makes for evidence-based policymaking is pretty compelling. It might not solve every problem—or even a healthy share of them. Still, it is nice to think that a more rigorous scientific method is being created to test theories and explore data about what makes us tick.