Just Say No to Tech Determinism

Technology Matters: Questions to Live With 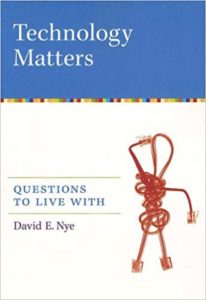 Technology often appears to bear the world along with an inexorable, irreversible momentum. Forces beyond human control seem to be driving us into a future of either boundless prosperity and unprecedented health and longevity or environmental catastrophe and social collapse. David E. Nye wants to save us from helplessness and deter us from simplistic thinking.

As a leading scholar of technology in the history of U.S. civilization, Nye knows all about utopianism and doom-saying: the two faces of inevitability. He also has a long view of his native land, having taught at the University of Aarhus in Denmark and more recently at the University of Warwick in England, where he holds a chair in comparative American studies and history. In 2005, he received the Leonardo da Vinci Medal, the highest award of the Society for the History of Technology. In Technology Matters, he uses an exceptional knowledge of both cultural and material change to examine real technological choices while rejecting easy extrapolation. The result is an unusually nuanced and provocative survey of the promise and price of innovation, organized as a series of essays on the most important controversies over the direction of technology.

Nye begins with a reminder that the word “technology,” itself relatively recent, has changed in meaning over the centuries, shedding its association with many craft skills along the way—especially those of women. As the modern concept of technology as a set of physical and chemical devices developed, the idea began to emerge that production and consumption have an internal logic driving humanity inexorably toward the future. As Nye observes, this conviction of a manifest destiny has united thinkers of the most diverse viewpoints, from Karl Marx and the turn-of-thecentury General Electric wizard Charles Steinmetz to contemporary figures as different as Alvin Toffler, Michel Foucault, and Nicholas Negroponte.

PARADOXICALLY, THE PROMISE OF A NEW LEISURE SOCIETY AND THE THREAT OF MASS TECHNOLOGICAL UNEMPLOYMENT HAVE BOTH BEEN THWARTED BY THE PACE OF TECHNOLOGICAL CHANGE ITSELF.

Nye shows, concisely and persuasively, how so many experts could have erred so often. Drawing on decades of scholarship on the conception and marketing of specific inventions, including his own important studies of the culture of electrification in America, he shows that values have shaped our material world as much as invention has. Pioneers such as Samuel Morse and Alexander Graham Bell struggled to find investors. Dominant companies such as IBM, committed to concepts of their products’ identity, have repeatedly been challenged and forced to change by newcomers. And consumers have shown remarkably different tastes; Swedish and U.S. workers welcomed electric lighting, whereas their British counterparts remained attached to gaslight well into the 1930s. Computerization, too, elicits surprising responses, sometimes undermining and sometimes strengthening cultural differences, simultaneously spreading cultural uniformity and reinforcing or even helping to create ethnic and religious identities.

Just as opposing tendencies persist in electronic communications, they permeate our relations with nature. In his chapter on the environment and sustainability, Nye suggests that the key to a healthy relationship between humans and their environment lies with the lifestyle choices of consumers. The cost of wasteful consumption is not only environmental, Nye suggests, it is also personal. Paradoxically, the promise of a new leisure society and the threat of mass technological unemployment have both been thwarted by the pace of technological change itself. He observes that one reason for middle-class Americans’ low savings rate has been their attachment to rapidly obsolescent high-technology products; meanwhile, the technical elite who design and distribute them seem to be a workaholic class uncomfortable with the very idea of free time.

Since people sometimes regret their choices or lament those made by their neighbors, regulation is one of the perennial topics of technology studies. Because the ultimate uses of innovations, from electronics to pharmaceuticals, so often surprise their developers, unfettered markets risk irreversible damage, whereas heavy-handed legislation can block real benefits. Favoring a middle path, Nye recommends that new technologies be reviewed by citizens’ panels and evaluative boards such as the former U.S. Office of Technology Assessment (OTA).

Reading his next chapter, on security, one wonders whether any citizen panel or expert committee could have foreseen the outcome of the Cold War nuclear standoff: a sudden end of the balance of terror between East and West, followed by an escalation of terrorism that includes the participation of people with degrees in engineering, science, and medicine. Nye also casts light on more insidious dangers that are not only hard to anticipate but even difficult to recognize when they occur. For example, he worries that the immersion of the psyche in a stream of data snippets and cranked-up, compressed sound could make nature and live orchestral music a disappointment to those immersed in artifice from childhood. He holds out hope that technology has not crushed our appreciation for unmediated experience.

Nye is an ideal guide through the minefields of cultural and technological polemics, concerned but fair-minded. An admirer of Scandinavian ways, such as central heating for whole neighborhoods, he still recognizes that the region’s use of panels of deliberative lay people to assess new technology may do no better than conventional experts in predicting long-term consequences. Critical of U.S. military intervention and of nuclear development, he also acknowledges that “powerful military technology did help democratic societies to prevail against direct threats to their existence” and that India and Pakistan have not fought a conventional war against each other since both acquired nuclear weapons.

ALTHOUGH WE REMAIN IN CONTROL OF TECHNOLOGY AND RETAIN OUR FREEDOM OF CHOICE, ON THE AUTHOR’S EVIDENCE, AMERICANS ARE FAR FROM CHOOSING WISELY THROUGH THE POLITICAL PROCESS.

The assets of Technology Matters are evident: a clear style, an eye for essential questions, resistance to common oversimplification, vast reading presented without academic jargon, and fresh insights from original sources. From a harrowing account of an 1843 Mississippi steamboat explosion— more vividly gory than anything that would be allowed on today’s television—to Nicola Tesla’s trenchant observations on technology’s amplification of warfare, Nye offers provocative examples and wide-ranging ideas.

At the edges of technological history, there are a few points open to debate. In discussing the idea of the coevolution of the human hand and brain, he cites James Beniger’s The Control Revolution (1986) but not Frank Wilson’s The Hand (1997), the most important current exposition of this concept. Nye treats as accepted science the existence of a miniature human species on the Indonesian island of Flores 18,000 years ago; a claim that may prove correct but is still disputed vigorously among anthropologists. He writes that “[t]ools emerged with the higher apes,” though behavioral ecologists have recently determined that New Caledonian crows may be the world’s most sophisticated nonhuman makers and users of tools.

He also may be oversimplifying some classic case studies of the electronic age. Although most reviewers considered the Beta video format superior in quality to VHS, not all did, and I have not found a double-blind test. It was the initial one-hour limit of the original Beta cassette—an aesthetic preference rather than a technical necessity—that destroyed Sony’s original lead. Besides, as some libertarian economists observe, DVD is superior to both consumer formats and has made VHS nearly obsolete by now. Nor were the Macintosh and its operating system unequivocally “better”than the IBM personal computer and its clones; as the literary scholar and computer writer Edward Mendelson suggested in an essay in the Yale Review in 1985, for writers in particular the PC with its DOS operating system was a more flexible and natural technology, and the buttoned-up IBM culture actually gave software writers and users more freedom than ostensibly laid-back Apple. (Nye implies that the essential problem was Apple’s failure to license its hardware and operating system.) These points do not undermine Nye’s arguments; in fact, they support his view of the importance of technological choices.

There are other sources that could have strengthened Technology Matters. As with any synthetic book, especially a short one, many readers will note some favorite that has been omitted. The excellent bibliography is 20 pages long and will be valued even by experienced scholars. But a few landmark works are missing. One is Charles Perrow’s Normal Accidents, which argues that some devices are structurally prone to catastrophic human errors; as opposed to the idea that “high-reliability organizations” can develop procedures and training to reduce risk to acceptable levels.

If there is any gap in Technology Matters, at least for U.S. readers, it may be the politics of technological decision-making. The author believes in democracy, equality, and respect for nature as more than a source of raw materials, yet he acknowledges that democratic politics, especially but not only in the United States, have so far reinforced rather than tempered individualist consumption. He also shares the skepticism of some conservatives about the potential of alternative energy sources. So although we remain in control of technology and retain our freedom of choice, on the author’s evidence, Americans are far from choosing wisely through the political process.

He does not explore why this should be true at some points but not at others. Writing of the United States, Nye observes: “To judge by the political parties’ programs . . . most people refuse to believe that there are imminent limits to growth and do not fear global warming. Voters support leaders who stimulate the economy, and they reject restrictions on technological innovation.” But Americans have opposed some innovations they believed harmful. U.S. politics, as Nye observes earlier in the book, did kill the U.S. Supersonic Transport (SST) program, whereas the United Kingdom and France proceeded with the Concorde. Americans pioneered not only cigarette production and marketing but also anti-tobacco litigation and regulation that dismay individualist European smokers traveling here.

Unraveling the paradoxes of technology, culture, and national politics is a daunting challenge, but in the end, Technology Matters is a book of questions rather than answers. As such, it is a powerful antidote to all forms of historical determinism and a most welcome case for the value of knowing the history of technology in choosing a better future.