Defining NASA: The Historical Debate over the Agency’s Mission 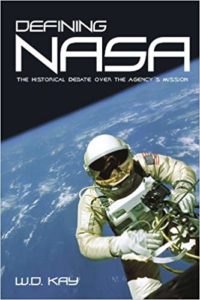 In his first year as National Aeronautics and Space Administration (NASA) administrator, Michael Griffin concluded that the space shuttle is an “inherently flawed vehicle” and that both the shuttle and the space station were mistakes. In essence, he was inferring that NASA has been on the wrong course for more than 30 years. This welcome candor becomes the new head of the space agency, brought in last year to succeed Sean O’Keefe, who resigned in the wake of the Columbia accident. Yet, in spite of these insights, Griffin agreed to fly the three remaining shuttle orbiters until their mandatory retirement in 2010, to declare the space station complete, and to move on to President Bush’s ambitious Space Exploration Initiative (SEI). Within months of making these commitments, however, Griffin had to admit that he could not do all this on the agency’s existing and projected budget. Candor could illuminate NASA’s problems, but it was powerless to resolve them.

KAY ARGUES COGENTLY THAT ALLOWING SPACE ACTIVITY TO BE DEFINED BY COLD WAR COMPETITION LEFT NASA WITH NEITHER A RUDDER NOR A COMPASS WHEN THE COLD WAR ENDED.

Political scientist W. D. Kay attempts to explain this disjuncture in Defining NASA. The author of the earlier Can Democracies Fly in Space?, Kay has established a reputation as a thoughtful and prolific student of the civilian space program. NASA, to its credit, commissioned this latest book through its history office. Kay, to his credit, produced a work that curries no favor with NASA and pulls no punches in its analysis. The civilian space program has been a disappointment since the Apollo mission to the Moon in the 1960s and early 1970s. The reason, says Kay, is that it has lacked a clear mission and a policy. The goal of his book is to explain why that mission never materialized.

Kay begins with a useful conceptual overview of the relevant theoretical literature from political science, public policy, and management. From these he distills three critical categories of analysis for his study: problem definition, goals, and organization. Then he walks through the space age, president by president, beginning with Eisenhower. Remembering Pearl Harbor and worrying about the capabilities and intentions of the Soviets, Eisenhower saw space primarily as a medium for reconnaissance satellites. His administration supported the Vanguard program of the International Geophysical Year as a cover for a reconnaissance satellite program. He cared less for being first into space than he did for establishing the legal precedent for overflight, and he initially dismissed the strategic and psychological importance of Sputnik. When the Democratic opposition used the Soviet achievement against Eisenhower and the Republicans in the 1958 and 1960 elections, they changed the public understanding of the mission of the space program. The goal of peaceful development was replaced by a race for prestige, preeminence, and security. 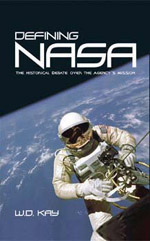 John Kennedy at first paid little attention to this issue and allowed it to disappear from his 1960 presidential campaign. But when the Soviets stole another march on the United States with the first human spaceflight in 1961, following as it did fast upon the heels of the Bay of Pigs debacle, Kennedy sought a public demonstration that could restore the nation’s reputation as the world’s leader in science and technology. Unlike Eisenhower, Kennedy was happy to race with the Soviets. On May 25, 1961, he proposed a human mission to the Moon by the end of the decade, establishing the gold standard for presidential leadership in space policy and indelibly defining the civilian space program as an instrument of Cold War competition.

Kay notes that NASA’s post-Apollo woes really began in the middle of the 1960s, when Apollo funding peaked. Even as NASA survived the disastrous fire aboard the Apollo 1 spacecraft that killed three astronauts in a 1967 test on the ground and went on to achieve one of the great triumphs of the 20th century with the first Moon landing in July 1969, post-Apollo planning produced consensus on only three issues: The future of the space program should be balanced, Earth-oriented, and not Apollo. Space shuttle development was undertaken without a clear sense of what it would achieve. The Reagan administration, which inherited the space shuttle, observed in its first year of operation that the launch vehicle violated the foundational principles of the Reagan revolution by subsidizing commercial flights and thereby stifling the development of commercial launch services. In spite of this, Reagan allowed NASA to continue its pricing policies, and he even approved the development of a space station, presumably, says Kay, because it would promote commercial manufacturing in space.

When the Challenger exploded on January 28, 1986, Reagan’s compromise of his principles came home to roost. While the president rallied national support for the space program and proposed funding of a replacement orbiter, he took the more consequential step of canceling all commercial flights aboard the shuttle, limiting the launch vehicle to government missions. That fateful step, says Kay, locked the country into the policies—or lack of policy—that administrator Griffin must now untangle. Reagan and his successors emphasized military and commercial uses of space, largely ignoring NASA.

Kay’s account has much to recommend it. Clear and reasonably thorough, it enlivens the traditional narrative with some interesting interpretive twists, especially on Reagan. It maintains consistently that R&D offers the most illuminating framework in which to understand space policy. And it argues cogently that allowing space activity to be defined by Cold War competition left NASA with neither a rudder nor a compass when the Cold War ended. All of this helps to explain the disarray in which Griffin now finds himself immersed.

But Kay’s analysis also has some lacunae and idiosyncrasies that deserve mention. First, the space agency has no agency. Kay’s protestations to the contrary, this is a conventional analysis focused on the presidency. In Kay’s view, NASA is the object of policy or of lack of policy, not a shaper of policy. Yet the trajectory of the civilian space program since Apollo can be seen as the execution of the Space Task Group’s 1969 report Post Apollo Space Program: Directions for the Future. This blueprint for the nation’s future in space called for a space shuttle to be followed by a space station to be followed by a human mission to Mars. NASA came to call the plan “the next logical step.” Taking President Bush’s 2004 SEI at face value, this is exactly the course that NASA is on. Kay’s entire story of a policy void can just as easily be read as a policy triumph—for NASA.

Second, Kay speaks almost exclusively about human spaceflight, as if that were synonymous with the U.S. civilian space program. And at times, this surely seemed to be the case. For most of its history, NASA spent two-thirds of its budget on human spaceflight and one-third on all the rest: the space science probes and satellites, the weather satellites, the communications satellites, the Earth resources satellites, and the many other automated spacecraft that the agency developed or operated. Administrator Daniel Goldin, who served from 1992 to 2001, claimed to have shifted the agency’s balance so that only half the budget went to human spaceflight and half to all the other activities. In any case, a significant portion of the U.S. civilian space program (some would say the most productive portion) did not involve astronauts at all. Yet Kay pays little attention to this topic, reflecting perhaps the belief that only human spaceflight rose to the level of public consciousness necessary to form a national consensus.

Third, Kay presents the Reagan administration as driving the space program toward crass commercialization, calling the Reagan chapter “Dollars, Not Dreams; Business, Not Government.” But this does not satisfactorily explain Reagan’s support for the space station, the white elephant that Griffin must somehow unload. A more parsimonious and revealing explanation is what might be called “getting right with Kennedy.” Since the space age began with the launch of Sputnik in 1957, every Republican president has made a plan for human space exploration a spectacular part of his reelection campaign. Nixon embraced the space shuttle, Reagan the space station. In 1989, George H. W. Bush proposed pushing on to “the Moon and Mars and beyond” and repeated the call in his 1992 campaign. George W. Bush offered the SEI in 2004. Their motivation seems to be partly to capture Kennedy’s image of boldness and vision, partly to play to voters in California (the heart of the aerospace industry), and partly to protect the space issue from Democratic poaching during the campaign. The space station, which Kay notes in passing was “viewed by NASA as its most important project,” had more to do with politics than philosophy.

In the end, Kay believes that NASA is best understood as an R&D agency. While other Cold War R&D agencies moved to reconversion and dual-use technologies in the 1990s, NASA continued to bet its future on the mistaken policies of the shuttle and the space station. President Bush’s SEI offers no relief; it simply resuscitates the unfunded plan that his father announced on the 20th anniversary of the first Apollo landing, in the twilight of the Cold War. NASA will likely continue to try to be what it has been from the start, the human spaceflight agency, trying to reprise the mandate, the money, and the glory of Apollo. Kay’s book makes it clear why this will not work. 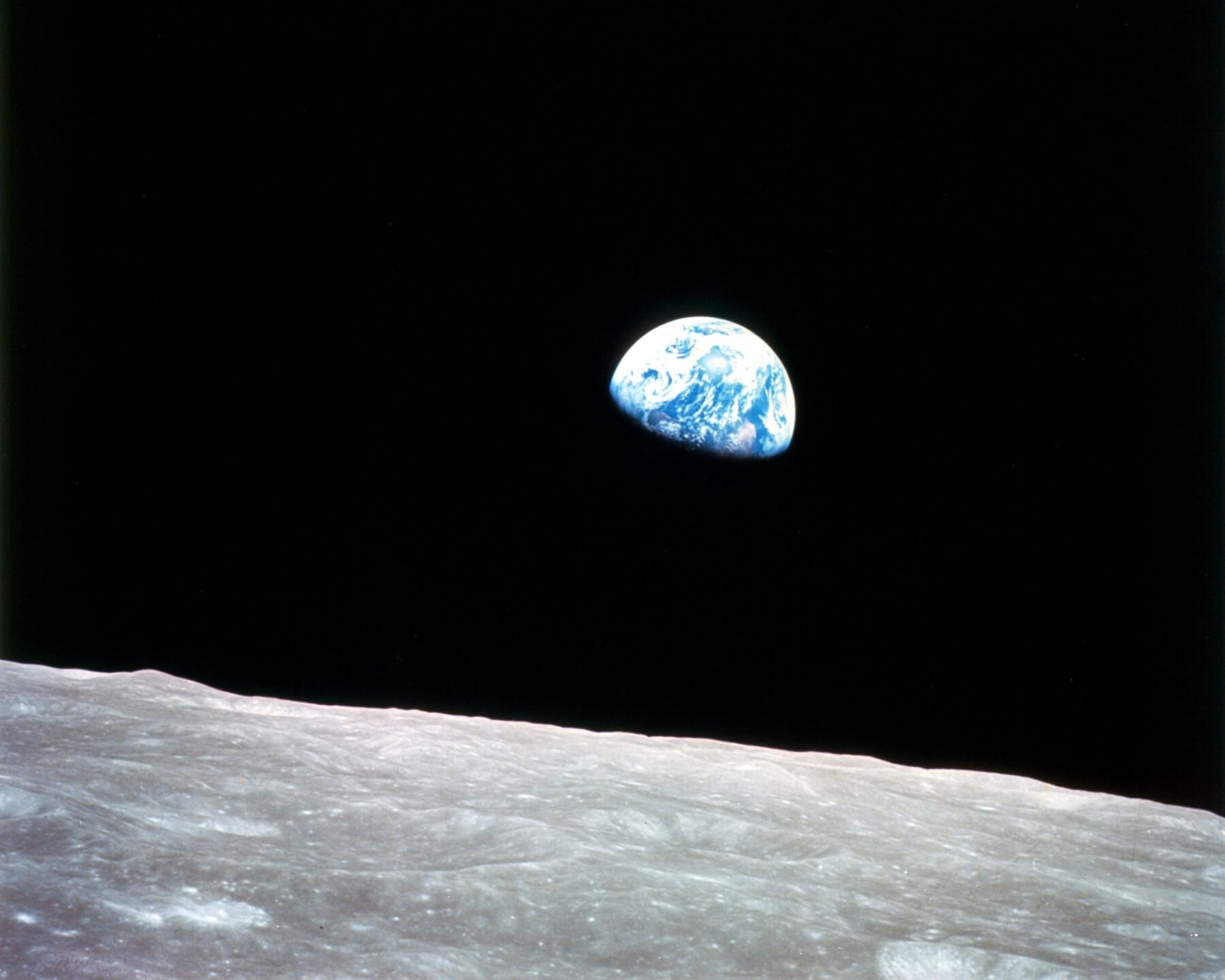