Dump deterrence? Not yet

By Alexei Arbatov and Vladimir Dvorkin

In Beyond Nuclear Deterrence, Alexei Arbatov and Vladimir Dvorkin, two well-known and respected Russian security experts, analyze and then propose modifications to the current nuclear deterrent relationship between Russia and the United States. Their goal, they explain, is to “transform the current state of mutual nuclear deterrence . . . into a new mode of relations based on mutual management of nuclear weapons.” 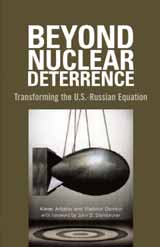 The authors point out that despite the substantial easing of tensions since the end of the Cold War, a truly cooperative U.S.-Russia relationship has not developed, and the irrational and dangerous policy of mutual assured deterrence continues to prevail. They argue that this mutual nuclear standoff represents “a latent but real barrier to . . . cooperation and integration,” and that “transforming deterrence as part of forging closer security relations with the West would certainly advance Russia’s progress toward democracy and economic integration with the West.”

Arbatov and Dvorkin argue that continued reliance on deterrence perpetuates concerns about the potentially hostile intentions of the other party, the risk of an inadvertent or accidental nuclear attack, the possible diversion of nuclear weapons to rebel groups or terrorists, and the feasibility of a disarming first strike. Moreover, they note, although the likelihood of a massive nuclear exchange has diminished, nuclear-weapons states have become more explicit about contemplating the use of nuclear weapons in response to various, often non-nuclear, threats. Finally, the authors decry the fact that since the end of the Cold War, the United States has not only spurned the pursuit of nuclear arms control, greater transparency, and confidence-building measures but has also considered creating new nuclear weapons.

For Arbatov and Dvorkin, nuclear deterrence is “ultimately irrational” and should be replaced for a number of reasons: It is stunningly irrelevant to the real threats and challenges of the age of non-state terrorism, it places limits on the ability of the United States and Russia to cooperate in dealing with new threats, and it is a terrible waste of national resources.

To enable the United States and Russia to abandon or at least modify mutual assured deterrence, the authors suggest three steps: further reduce and de-alert a significant portion of the Russian and U.S. strategic nuclear arsenals, develop and deploy a joint ballistic missile early-warning system and a joint missile proliferation monitoring system, and develop and deploy a joint ballistic missile defense (BMD). The goal would be to “envelop the major portion of the technical assets of the [United States and Russia], making war between them operationally and technically impossible, and bringing them to a close strategic alliance.”

Additionally, Arbatov and Dvorkin propose a number of arms control steps to complete the process of reining in and ultimately transforming the strategic nuclear relationship. These include completing the counting rules for the Moscow Treaty (formally called the Strategic Offensive Reductions Treaty, or SORT), a reference to the U.S. claim that only “operationally deployed” warheads are limited; designing appropriate verification provisions; and extending the treaty’s life so that it does not expire on the same day that the final limits come into effect. They also endorse further reductions of strategic forces to 1,000 to 1,200 warheads by 2017 in a SORT II, limiting and reducing tactical nuclear weapons, limiting the number of submarines and mobile intercontinental ballistic missiles (ICBMs) on patrol, and forswearing the first use of nuclear weapons.

The authors conclude by stating that the key to a better, more secure world is to remove mutual nuclear deterrence “as the foundation of the operational strategic relationship between the United States and Russia; as the material embodiment of the two states’ confrontational military relations; as an impediment to their security and political cooperation; and as a huge drain on their financial resources and scientific technological innovations.”

In an era in which neoconservatives have railed against the uselessness of arms control in dealing with nuclear weapons, it is refreshing to read a book dedicated to reviving interest in traditional arms control. It would certainly make sense for the United States to ratify the Comprehensive Nuclear Test Ban Treaty (CTBT) and seek a Fissile Material Cutoff Treaty. It would also be helpful if the next administration reversed the current pro-nuclear-use rhetoric. It is hard to see how threatening to use nuclear weapons in response to virtually any threat helps persuade Iran or North Korea to abandon their interest in a nuclear arsenal to deter the nuke-happy United States. Beyond Nuclear Deterrence helps us face the fact that we have been marking time in arms control since the signing of the CTBT in 1996 and that nuclear arms control and proliferation issues do not go away if ignored but tend to get more complicated and critical.

Arbatov and Dvorkin’s essential premise—that deterrence between the United States and Russia is irrational if not downright dangerous—is fair enough. But their prescriptions for escaping from this brave new world seem flawed. The United States does not have an adversarial relationship with Russia because of deterrence; there is deterrence because many people still believe a potentially adversarial relationship could emerge. Until U.S. leaders can surmount the sense that Russia is an unpredictable if not confrontational partner, they will be inclined to hedge against a potential deterioration in relations. The move from confrontation to cooperation that Arbatov and Dvorkin believe can be jump-started by “transforming deterrence” will be a slow one. The special relationship between the United States and the United Kingdom, which seems so politically inevitable, took at least 150 years to begin to develop.

The no-man’s land between Cold War confrontation and close cooperation that inhibits doing away with deterrence also militates against intimate technical coordination of missile defense programs and early-warning systems. When challenged about the destabilizing effects of missile defenses, it has traditionally and ironically been the last refuge of U.S. hard-liners to offer to share the technology with the Russians and/or the rest of the world (as President Reagan did when he announced his Strategic Defense Initiative in the 1980s). But there is absolutely no indication that Congress, the Defense Department, or even “soft-on-security” liberals have any intention of or interest in actually sharing sophisticated BMD technology or command-and-control decisions with Russia.

WHAT HANDICAPS THE ARBATOV/DVORKIN STUDY IS THE SENSE OF SPECIAL PLEADING THAT IT CONVEYS: THE UNDERSTANDABLE EFFORTS OF THE AUTHORS TO OFFER REMEDIES FOR THE SERIOUS SHORTCOMINGS OF RUSSIA’S PRESENT-DAY AND LIKELY FUTURE STRATEGIC NUCLEAR POSTURE.

The same political inhibitions probably hold true for de-alerting as well. If strategic force levels are reduced to the 1,000 to 1,200 level, as Arbatov and Dvorkin propose, but the present political and strategic environment endures, then the tendency of military planners will be to maintain the alert status of the smaller remaining forces, particularly if they are believed to be vulnerable. On the other hand, if the United States and Russia move away from a deterrent relationship, then U.S. alert levels will either go down as a result or cease to be perceived as particularly threatening by the Russians.

What handicaps the Arbatov/Dvorkin study is the sense of special pleading that it conveys: the understandable efforts of the authors to offer remedies for the serious shortcomings of Russia’s present-day and likely future strategic nuclear posture. Rather than providing an objective analysis of how to enhance a stable strategic relationship between nations that are not natural allies, the book gives the impression that early-warning and missile defense cooperation on the one hand and lower force levels and selective strategic force constraints on the other seek either to make up for Russian weaknesses or play down U.S. strengths.

This is not to say that all the authors’ recommendations are without merit. Reducing nuclear force levels as they propose would clearly be desirable, as would changes in declaratory policy and the renunciation of first use. The United States should also be very concerned about a Russian early-warning system that is so broken that it increases the likelihood of miscalculation in a crisis, and it should proceed with the Joint Data Exchange Center, which has languished for the past eight years. (The center is meant to exchange missile launch data from early-warning systems between the two countries.) And the obvious solution to Russian concerns about force vulnerability is to deploy more survivable systems such as submarines or single-warhead mobile ICBMs.

But perhaps the most important issue the authors raise is the one of how to move beyond deterrence. This move is not likely to take place at the operational level before there are changes at the political level. After all, the United States is not in a deterrent relationship with France or Israel, and those countries are not concerned about the threat from U.S. hard-target kill capabilities, force-reconstitution capabilities, or BMD systems. It is Russia’s political leadership that has to decide whether supporting Iran’s nuclear ambitions and smothering political dissent is more important than abandoning deterrence and moving into a new, more benign or even cooperative relationship with the United States.