The end is near

The Revenge of Gaia: Earth’s Climate in Crisis and the Fate of Humanity

At age 87, James Lovelock remains the indefatigable proponent of the Gaia hypothesis, which depicts Earth as a living entity. In The Revenge of Gaia, he warns that Gaia is not well. Earth is running a worrisome fever, and unless drastic action is taken immediately, the coming heat wave will prove catastrophic. By the end of the century, Lovelock fears, humanity will be reduced to a small fraction of its current size, largely limited to arctic and polar refuges. 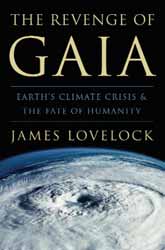 Lovelock’s warnings are rather apocalyptic but hardly exceptional. Almost all environmental scientists worry about global warming, and for good reason. Lovelock’s prescription for avoiding collapse, on the other hand, is rarely encountered. The only thing that can save the world, he vigorously argues, is nuclear power.

Such a pro-nuclear stance is tantamount to heresy in the environmental community. But Lovelock is a fiercely iconoclastic thinker, willing if not eager to attack core assumptions of the movement itself. In doing so, he provides a useful tonic for environmentalism, challenging its party-line positions while urging everyone to think beyond their conventional assumptions. One can only hope that his advocacy of fission power and his attacks on renewable energy generate respectful debate among green thinkers rather than excommunication.

Although The Revenge of Gaia is always bracing, the solidity of its arguments is another matter. Although he never ceases to be informative and provocative, Lovelock is not always convincing. Like many environmental writers, he tends to exaggerate, to find certainty where it is not warranted, and to ignore contradictory evidence. As a result, Lovelock’s three key contentions require further scrutiny. First, does the Gaia hypothesis provide a suitable template for understanding climate change and its associated dangers? Second, will global warming prove as catastrophic as it is portrayed here? And third, is nuclear power really as benign as Lovelock thinks it is?

Lovelock devotes little space to outlining his well-known Gaia hypothesis. He does, however, argue against rationalist critics who dismiss it as a form of mysticism. The Gaia model is highly useful for understanding global climate, he contends, and as a result it is coming to be accepted by increasing numbers of earth-systems scientists.

The crucial issue for assessing Gaia as a scientific concept is what exactly is meant by “alive.” Unfortunately, Lovelock tends to equivocate. He allows that the “living Earth” is something of a metaphorical conception, which helps us grapple with the self-regulatory capacity of the planet’s intertwined biotic and climatic systems. Yet Lovelock seemingly cannot help portraying Gaia not only as a singular, living being, but as one possessing will and volition—and with revenge on her mind. In the end, he wisely gestures toward consigning the more ineffable aspects of the thesis to the domain of religion. Unfortunately, the scientific and spiritual dimensions of the Gaia perspective tend to be conflated elsewhere in the text.

As powerful as Gaia’s self-regulatory properties may be, Lovelock argues, they are about to be overwhelmed by the greenhouse gases spewed out by human activities. As global warming intensifies, positive feedback cycles will kick in, accelerating the destruction. The late 21st century, in this grim vision, will be marked by such heat and drought as to reduce most of the world to arid waste. Lovelock’s map of a greenhouse Earth, with an average temperature 5° Celsius higher than at present, shows forests persisting only in Canada, northern Eurasia, Japan, Patagonia, Madagascar, the Himalayas, and Tasmania. The rest of the world will supposedly be covered by desert and scrub.

Although global warming is now virtually irrefutable, both the rapidity and the extent of temperature increase remain open issues. More pronounced difficulties are encountered with predictions of vegetation change. Lovelock focuses strictly on enhanced evaporation and thus foresees an arid future. Greater rates of evaporation over expanded oceans, however, will also generate increased precipitation, although where and when the extra rain will fall remains obscure. Drought will probably intensify in many if not most equatorial and mid-latitude locations, but monsoonal rainfall could well be augmented, perhaps even leading to a greening of the Tibetan plateau. Such a possibility, however, is nowhere to be seen in The Revenge of Gaia.

Confidence in Lovelock’s climatology is not enhanced by an examination of his maps of current and ice-age vegetation zones. In the former case, he depicts South America as potentially supporting forests everywhere but the Atacama—even on the arid, windswept plateau of Patagonia. Lovelock loses much of his paleoclimatological credibility with his map of full glacial conditions (5° Celsius colder than at present), which shows all land areas not covered by ice as having been forested. In actuality, the Pleistocene world at glacial maximum was inhospitably dry as well as cold, with equatorial rainforests reduced to scattered refugia and with deserts covering areas such as the Argentine pampas that are now relatively humid.

Lovelock’s idiosyncratic account of glacial-age vegetation is rooted in his core concern about Gaia overheating. Earth’s fate, he reminds us, is death by fire; as solar radiation slowly intensifies, our planet will eventually burn. Gaia’s response to this inexorable if distant threat, he contends, is to cool itself through the development of huge glaciers, which reflect solar radiation back into space. During the Pleistocene glacial episodes, when Gaia’s cooling mechanisms were functioning smoothly, plants grew so vigorously that they supposedly pumped much of the carbon dioxide out of the atmosphere, helping maintain the beneficially cool conditions. With vast expanses of the ocean’s surface remaining below 12° Celsius, moreover, continual mixing ensured that nutrients remained in circulation, thus generating highly productive marine ecosystems.

By releasing stored carbon, humanity undercuts this vital regulatory mechanism, forestalling future glaciation and thus sending the world prematurely into its hotly catastrophic future. More immediate disaster, we are warned, awaits the maritime realm. When ocean temperatures exceed 12° Celsius, mixing ends, nutrients fall to the sea floor, and marine “deserts” emerge. “This may be one of the reasons why Gaia’s goal,” Lovelock writes, “appears to be to keep the Earth cool.”

Although intriguing, Lovelock’s depiction of marine productivity is marred by hyperbole. He ignores other mixing mechanisms, such as upwelling, and absurdly depicts coastal waters off California, Peru, and Namibia as virtually lifeless deserts. His interpretation of ice-age vegetation, moreover, is decidedly heterodox. The extremely low carbon dioxide level at the time was a major constraint on plant life; subarctic marine algae may have thrived, but far more botanically diverse terrestrial ecosystems were under considerable stress. Lovelock, to the extant that he acknowledges this, contends that biodiversity is itself a response to the already dangerous levels of interglacial warming and is thus overrated. “So rich biodiversity,” he concludes, “is not necessarily something highly desirable and to be preserved at all costs.”

Lovelock’s casual dismissal of concerns about biodiversity reveals an almost perverse enthusiasm for ice-age conditions. One gets the impression that he would cheer the readvance of continental glaciers. It is difficult to argue, however, that a mile of ice sitting over the Midwestern corn belt would be less devastating to human society—or to natural ecosystems—than would a full 5° of global warming.

Lovelock’s concerns about climate change may be commonplace within the environmental movement, but not so his proposed solutions. He scorns the usual green energy strategies, both for economic and, more intriguingly, environmental reasons. He rejects biomass production because it requires the expansion of agriculture, further weakening Gaia by eliminating natural ecosystems, and condemns wind turbines for spreading a hideous blight across rural landscapes. And although he allows that solar and tidal power might supplement our energy requirements, he denies that they are effective enough for full reliance. As a result, only nuclear power will do. Hoping that clean fusion power will soon become viable, Lovelock argues that we must first embrace conventional fission reactors.

Lovelock’s endorsement of nuclear power seemingly comes with no reluctance. He accuses environmentalists of failing to understand Paracelsus’s still-relevant dictum: Poison lies in the dose rather than the substance itself. Lovelock considers nuclear waste so benign that he would volunteer to bury Britain’s entire stock in his own backyard. Chernobyl and other nuclear catastrophe sites, he reminds us, are now verdant wildlife sanctuaries. Outrageously but perhaps correctly, he argues that oxygen, not pollution, ultimately causes most cancer. Lovelock comes to the brink of contending that environmental fear-mongering, however well-intentioned, has helped bring us to the edge of disaster by preventing the spread of nuclear energy.

Certainly environmentalists, Lovelock among them, have tended to exaggerate threats to nature. In regard to nuclear power, hyperbole is encountered on both sides: The dangers posed by waste materials have no doubt been overstated, but long-lived radioactive contamination can hardly be considered harmless. Nonetheless, Lovelock’s arguments about energy ought to be carefully assessed. At the very least, a scientifically and economically informed reconsideration of nuclear power is in order, considering the profound threats posed by continued fossil-fuel reliance.

Intriguingly, Lovelock’s advocacy of technological solutions extends well beyond nuclear power. He even gives an appreciative if skeptical hearing to audaciously high-tech proposals for combating global warming, such as the building of gargantuan sunshades in outer space. The Holy Grail of Lovelockian technoenvironmentalism would appear to be the artificial synthesis of food out of elements extracted directly from the inorganic environment, which would allow Gaia to reclaim most agricultural landscapes.

Lovelock’s vision of manufacturing food could hardly be further removed from the small-scale organic farming favored by most green activists. Such technological enthusiasms are more commonly encountered among so-called cornucopian optimists, who dismiss all ecological concerns. But there is nothing intrinsically contradictory in Lovelock’s Promethean environmentalism. Decoupling the economy from nature, as he envisages, would be the only way to restore sizable areas to nature without generating a global depression. If, on the other hand, all six billion humans were to be fed strictly through organic farming methods, it is doubtful that any significant areas of unperturbed habitat would remain.

James Lovelock was not the first environmentalist to advocate green Prometheanism, but his predecessors have largely been either ignored or reviled as giddy apologists of a cancerous industrial system. Perhaps Lovelock’s stature will allow such ideas to be given real consideration, but I am not hopeful. Much of the broader environmental movement continues to be informed by the romantic, antimodernist mindset that it adopted in the 1960s. The world is indeed experiencing an ecological crisis, but only a hard-headed approach, one that takes economics and engineering as seriously as climatology, can provided the needed solutions.