The Dark Side of the Moon: The Magnificent Madness of the American Lunar Quest

Once this history of the Apollo program reaches its stride in chapter six, it presents a persuasive and telling critique of human spaceflight. The preface and the introductory chapter suffer from an excess of hollow rhetoric, dismissing the space race of the 1960s as “shallow and trivial”and the Apollo program as a “glorious swindle” in which “nearly every mission came close to catastrophe.” The rhetorical excess gradually abates in the next four chapters, but these devolve into a conventional historical narrative of the origins of the space race, based primarily on a modest and incomplete selection of secondary sources. The story is fine, but little distinguishes it from the vast existing literature on the topic. 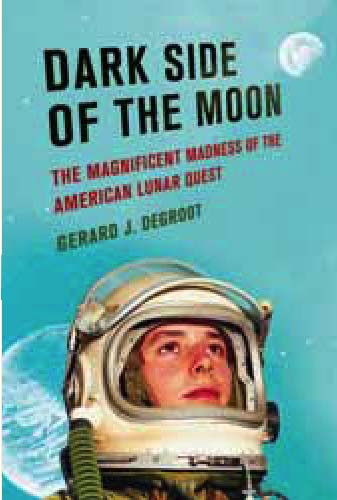 An argument begins to emerge in chapter six with the treatment of Sputnik. From that point on, Dark Side of the Moon becomes an informed, focused, persuasive, and finally scathing indictment of the Apollo program in particular and human spaceflight in general. DeGroot explores the contrast between rhetoric and reality, the politics of fear, the triumph of public relations, the manipulation of public opinion, and finally the “lunacy” of those who nurtured Utopian visions of humankind’s future in space. Astronaut Michael Collins captures DeGroot’s opinion of the Moon, “this monotonous rock pile, this withered, Sun-seared peach pit.” It is little wonder to DeGroot that humans have not been back to the Moon in more than 30 years. The marvel is that the National Aeronautics and Space Administration (NASA) is gearing up to return in the coming decade.

Two historical figures dominate DeGroot’s tale. Wernher von Braun is the evil genius who planted in the U.S. psyche the image of humans effortlessly zipping around the solar system. DeGroot revels in von Braun’s Nazi past and his miracle conversion to American democracy, conceding all the while the charm and charisma of the man and his legendary powers of persuasion. Von Braun had the “mind of a drug dealer,” says DeGroot, and “the instincts of a populist.” He used his talents shamelessly and successfully to promote his “selfish fantasies” and his own “will to supremacy.” This “trickster,” this “spin-doctor for space . . . probably the only rocket man with a full-time publicist” was “intent on leading Americans down the lunar path.” The von Braun exposed by DeGroot is a familiar figure in U.S. space history, though seldom is he pilloried so wickedly.

Paired with von Braun in responsibility for the Apollo program is President John F. Kennedy. DeGroot implies that Kennedy’s contribution was even more odious because he never really cared for space, an admission he made in a famous meeting of November 1962, barely two months after his rousing “this new ocean” speech at Rice University. Indeed, DeGroot presents Kennedy as ruing his 1961 commitment to put men on the moon before the end of the decade. During his last two years in office, the combative president searched for ways to escape the suffocating financial burden that Apollo imposed on his political freedom of movement. Kennedy’s 1963 United Nations speech, suggesting that the United States and the Soviet Union go to the Moon together, was just the most obvious of his many attempts to get out from under the space race. But once Kennedy was assassinated, the Moon mission became politically untouchable, a monument to a slain president who did not really care that much. DeGroot appears to find Kennedy’s opportunism and duplicity as shameful as von Braun’s self-serving hucksterism. By October 1963, says DeGroot, “Kennedy’s space program was a dog’s dinner.”

These two central characters are surrounded by a bevy of supporting actors, carried along on a wave of almost spiritual enthusiasm for human spaceflight. Politicians proclaimed mindlessly that whoever controlled the heavens would control Earth. Scientists endorsed the Moon mission in the expectation that more federal dollars would flow into space science. The aerospace industry quickly perceived a windfall. Even so critical an observer as Secretary of Defense Robert McNamara embraced Apollo because he realized that NASA funds would support launch-vehicle development without burdening his already swollen defense budget. The public at large accepted all the justifications for Apollo offered by these public figures but loved the enterprise in the first instance because of the great public theater. NASA played its part by commodifying Apollo and packaging the astronauts as heroes. Brian Duff, NASA’s director of public affairs, said that his job was “to keep up a drumfire of positive public attention on the program and never let up the visibility of it.”Apollo was marketed like candy to an adoring public and a cynical power elite.

DEGROOT’S DISTASTE FOR APOLLO SEEMS TO FLOW NOT FROM A CALCULUS OF PUBLIC INVESTMENT BUT RATHER FROM A PROFOUND, BUT LARGELY UNEXPLORED, DISTRUST OF TECHNOLOGICAL INNOVATION OR PROGRESS.

By comparison, the critics were few and ineffective. President Dwight Eisenhower resisted the space race from the start and remained critical throughout the Apollo program. His NASA administrator, T. Keith Glennan, shared his views and lost his job to James E. Webb when the Kennedy administration took office. Webb kept his reservations to himself and tried with mixed results to steer some of the avalanche of Apollo funding to a “balanced” space program and to contracting policies at home that were redistributive and socially responsible. Columbia University sociologist Amitai Etzioni labeled Apollo “the moon-doggle” and spoke against it to all who would listen. Newsweek columnist Edwin Diamond likened Apollo to potlatch, the tradition of some Native American tribes to compete for prestige by seeing who would give away more of his own property. Social critic Lewis Mumford called Apollo “an extravagant feat of technological exhibitionism” and subsequent proposals mere “technological disguises for infantile fantasies.” But these pioneer critics, blazing the trail that DeGroot follows in this book, were shouting into the wind. After Kennedy’s assassination, not even the fatal Apollo 204 fire of 1967 could deflect the United States from the Moon mission. The Moon landings were “a homage to Kennedy” and a gambit in the Cold War. Nothing could stop them, but then again nothing since has convinced Americans to repeat the performance.

DeGroot’s critique of Apollo operates at the visceral level. His distaste for the program is palpable. To him it was a silly, expensive, dangerous, empty stunt of no lasting significance. He little notes and barely credits Kennedy’s rationale of demonstrating to the world the superiority of U.S. science and technology. Surely that was worth something—maybe not $25 billion (almost $150 billion in 2005 dollars), but something. Lyndon Johnson once said famously that the value of satellite reconnaissance repaid the entire investment, military and civilian, that the United States made in space. So it is possible to think about the costs and benefits of Apollo, but DeGroot displays no interest in the topic. He does not even embrace the claim by Amatai Etzioni and other Apollo critics that the money spent could have been better invested in social programs at home. De Groot seems to believe that Apollo was exorbitant at any price, independent of the opportunity costs it consumed.

DeGroot’s distaste for Apollo seems to flow not from a calculus of public investment but rather from a profound, but largely unexplored, distrust of technological innovation or progress. “Virtually every major technological development, including television, nuclear power, and the Internet,” he claims, has “rendered man more efficient in his moral corruption.” Such a catholic indictment, which gathers in its sweep everything from refrigeration to CAT scans, bears some of the flavor of the postmodern malaise, the perception that the 20th century and the whole sorry outcome of modernity has been disastrous for the human race. Though DeGroot writes clearly, even effervescently, without resort to the arcane vocabulary of cultural theory, he appears to harbor some of the suspicion of modern technology that moves so many critics of the neoliberal capitalist globalism that triumphed in the Cold War.

Perhaps DeGroot honed his dismay over modernity in his previous book, a history of nuclear weapons. Still, DeGroot has the honesty to admit that Apollo, for all its irrationality, was, as his subtitle concedes, “magnificent.” “Every once in a while,” he writes, “astronauts and cosmonauts demonstrated that, even though their race was trivial, there was something magnificent about it.” He reports some of the heroic acts in space and some of the terrifying near misses that the early spacefarers survived. And of course he recognizes those who dared and died. But he can muster no similar encomium for the human spaceflight program of the ensuing three decades. In his view, the misbegotten attempt to replay Apollo over and over again has all of the flaws of that unique program and none of its magnificence.