Betrayal of Trust: The Collapse of Global Public Health 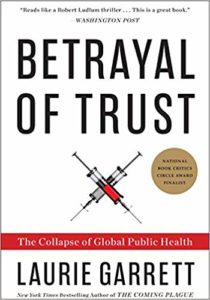 Laurie Garrett, author of The Coming Plague and winner of the Pulitzer Prize for her reporting of the 1995 outbreak of the Ebola virus in Zaire, has been an important voice for those who advocate the need for increased attention to global public health. In her new book, Betrayal of Trust: The Collapse of Global Public Health, Garrett takes the reader on a journey across place and time to make the case that public health worldwide is dying, if not already dead. And she warns us of the dire consequences–the reemergence of deadly infectious diseases, the growing potential for biologic terrorism, and the weakening of global disease surveillance and response capabilities, among others–that await us all, rich and poor, young and old, as a result.

The book’s introductory chapter sets the stage for two essential themes in the book. The first theme is that the legitimacy of the science of public health suffers because of a lack of clear definition. As Garrett notes, “Public health is a negative. When it is at its best, nothing happens.” It is not surprising, therefore, that advocates of public health continue to struggle to defend budgets and policies in the face of more visible and costly alternatives, including curative medicine. Garrett argues that a more fundamental definition of public health is needed, one that is rooted in civic trust and responsibility. She writes, “Public health is a bond–a trust–between a government and its people. The society at large entrusts its government to oversee and protect the collective good health. And in return individuals agree to cooperate by providing tax monies, accepting vaccines, and abiding by the rules and guidelines set by government public health leaders. If either side betrays that trust, the system collapses like a house of cards.” The examples she details at length in her book (the outbreak of pneumonic plague in the town of Surat, Gujarat State, India, in 1994; the reemergence of Ebola virus in Zaire in 1995; the growing epidemic of drug and alcohol abuse, multidrug-resistant tuberculosis, and whooping cough, measles, and other preventable childhood diseases in the former Soviet states; the gradual decline in U.S. public health infrastructure and capacity over the course of the 20th century; and the growing worldwide threat of biowarfare and bioterrorism) reflect a betrayal of trust on both sides.

Garrett’s second, and to this reader more important, theme is one that is underappreciated and, in some quarters, ignored by politicians and public health policy makers: that the growing disparity between the world’s haves and have-nots, as evidenced not only by the growing gap between rich and poor nations but also between rich and poor people in any given country, represents the single greatest current threat to global public health. Garrett writes that, as envisioned by its pioneers in the early 20th century, “public health was a practical system, or infrastructure, rooted in two fundamental scientific tenets: the germ theory of disease and the understanding that preventing disease in the weakest elements of society ensured protection for the strongest (and richest) in the large community.” As Garrett articulates in the chapter on “Preferring Anarchy and Class Disparity,” the loss of U.S. collective social identity and responsibility that became increasingly marked in the latter decades of the 20th century has led us ever closer to a reality of two populations: one marked by a virtual absence of disease and disability and the other overwhelmed by their presence. And we are not far removed from this reality now. The fact that U.S. maternal mortality rates are currently four times greater in African Americans than in whites is an indictment of our societal priorities and a call to public health action. As Garrett shows throughout the book, continued inaction in the face of increasing social inequalities in health, economic status, and other interrelated domains is a recipe for disaster that will spare no one. As the wealthy revelers in Edgar Allan Poe’s “The Masque of the Red Death” discovered, none of us can completely escape the health risks that afflict the rest of society.

Two books in one

Betrayal of Trust is divided into five main chapters, with an additional introductory chapter, epilogue, and well-researched endnotes. It is a curious stylistic amalgam, with a superb scholarly review of the decay of the U.S. public health infrastructure in a century of growing antigovernmentalism (chapter 4) sandwiched among four other chapters that are written in a more belletristic style. It seems almost as if the editors wanted to entice the reader to and through chapter 4 by using the lure of an easier, more accessible narrative on either side. Whatever the reason, the sheer length of the book is bound to discourage some readers, which is a shame. Chapter 4, by itself, should be required reading for all students in public health, medicine, political science, and related disciplines. Its description of the rise and fall of public health in the United States in the 20th century; the essential role of a civic-minded middle class in demanding an effective public health infrastructure; the discordance of an inherently autocratic public health system that arose in a democracy where no two states or cities had precisely the same policies; and the changing nature of the competition between curative medicine and public health as the U.S. population transitioned from a burden of predominantly infectious diseases to one of proportionately greater cancer, heart disease, and other adult chronic degenerative diseases is detailed and thoughtful

Though discordant in style from chapter 4, the other chapters are nonetheless enjoyable, because of the stories that Garrett tells and the often wonderfully evocative language that she uses to tell them. Take, for example, the beginning of chapter 2, “Landa-Landa,” which chronicles the 1995 Ebola outbreak in Zaire: “The night air was, as always, redolent with the smells of burning cook fires fueled by wood, wax, propane, or cheap gasoline. The distorted sounds of over-modulated 1995 hit ramba music echoed from the few bars along Boulevard Mobutu that had electric generators or well-charged car batteries. Fully dilated pupils struggled to decipher shapes in the pitch darkness, spotting the pinpoint lights of millions of dancing fireflies. Gentle footsteps betrayed what the eye on a moonless night could not see; the constant movement of people, their dark skin hiding them in the night. From a distance a woman’s voice rang sharply, calling out in KiCongo, ‘Afwaka! Someone has died! Someone has died! He was my husband! He was my husband.'” This is dramatic, lyrical writing, and it makes the reader’s journey through this long book a little easier.

Apart from the book’s split personality and daunting length, my only other criticism is that the book might have been strengthened had Garrett relied less on the annals of infectious disease epidemiology to demonstrate her points and, instead, forayed into other illustrative domains of public health such as environmental health. For example, the horrendous outbreak of arsenic poisoning among villagers in the eastern Indian state of West Bengal and in Bangladesh (where recent evidence suggests that 10 percent of the 5.1 million people at risk in West Bengal state alone could develop arsenic-related lung, bladder, and skin cancers) is a story of grinding poverty, poor public health science, and government indifference in the face of an unfolding catastrophe of heart-rending scale: a perfect tale to illustrate the betrayed covenant between a people and their government. Such an example might have made for a more varied and instructive read.

Betrayal of Trust is a compelling and important book. Garrett’s premise that global public health is collapsing is a bit stark, given the recent efforts (and beginning successes) of new coalitions of national governments, foundations and other nongovernmental organizations (NGOs), industry, and community groups interested in advancing the health and development of the poorest populations worldwide. Examples include the Global Alliance for Vaccines and Immunizations formed last year by UNICEF, the World Health Organization, and the World Bank, with an initial five-year grant from the Bill and Melinda Gates Foundation; and the Global Forum for Health Research, an international organization of government policymakers, multilateral and bilateral development agencies, research institutions, NGOs, and private-sector companies founded in 1998 to identify research initiatives and funding sources to tackle health problems in middle- and low-income countries. Nevertheless, her belief that the essentials of public health are human rights, that the critical dilemma for the 21st century is embedded in the disparity between rich and poor,and that effective public health depends on a sense of community and on the covenant of trust between people and their governments rings true and should be heard by all in positions of power.