Voodoo Science: The Road from Foolishness to Fraud 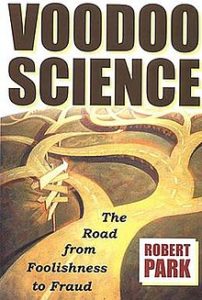 A former boss of mine, then-White House Science Advisor Jack Gibbons, used to tell the story of an aging despot who called in a succession of science advisors to tell him how he could live forever. One after another told the king that what he wanted wasn’t possible, and paid for their scientific candor with their heads. Finally, he struck pay dirt with a pharmacist who promised that with one pill he could guarantee the tyrant would never grow a day older. Sure enough, the one pill was cyanide; and sure enough, the tyrant never grew a day older.

Such ingredients–science, belief, and deceit–form the basis of Robert Park’s broadside against the foolish and the fraudulent. Park, a former chairman of the University of Maryland physics department who now directs the Washington office of the American Physical Society (APS), confronts a full spectrum of what he calls “voodoo” science. The road to voodoo science often starts with pathological science, in which scientists who should know better delude themselves into believing experimental results that defy everything they know about how the physical world works. And if scientists can fool themselves, how much easier, Park observes, it is to fool a scientifically unsophisticated judge or jury with junk science, theory, and argument designed specifically to befuddle and cloud policy or legal judgement with what could or might be possible. Sometimes, he notes, the erroneous beliefs of some scientists are masked by their appeal to real science. This dressing of bunkum in scientific clothes Park calls pseudoscience. And then there’s fraudulent science, when honest error crosses the line into deliberate deceit.

Anyone who reads Parks’ weekly one-page e-mail missive from the APS, What’s New, knows his deft and humorous touch. His acerbic wit finds a perfect match in the book-length forum of Voodoo Science. And Washington veterans who have heard Park railing at congressional hearings about the space station or as a color commentator on network television about perpetual motion machines will be pleased to acknowledge his continued mastery of the sound bite. Commenting on erstwhile presidential Natural Law Party candidate John Hagelin’s summerlong transcendental meditation experiment in 1993 to lower the crime rate in Washington, D.C., Park questions Hagelin’s claims that the mass meditation reduced “brutal crime” even though crime overall had increased. Maybe, Parks dryly observes, the murders were being committed more humanely: “perhaps a clean shot between the eyes rather than a bludgeoning.”

The archetypal case study in this collection is that of Joe Newman and the Energy Machine, purported to create more energy than it uses. Park has been on a tear about this particular affront to science since he first saw CBS promote the technology under the guise of news in 1984. But like a many-headed technological hydra, Newman’s claims resurface every few years despite Park’s op-eds, columns, and TV appearances. Why should such obvious hoaxes exist in a world of science and reason, and in the face of such convincing evidence to the contrary?

Part of the blame, explains Park, rests with a cultural bias that honors the underdog in any dispute with established powers. Scientists such as Newman who bypass peer review, the traditional means of establishing truth and credibility, take their case straight to the media who, as he points out over and over again, seem constitutionally incapable of distinguishing entertainment from reportage. Additional blame attaches to Congress, a body of lawyers unschooled in scientific thought or method, and to the judiciary, which perpetuates the “mythology . . . that a group of incurious and ill-read citizens will have some special ability to discern the truth.”

But the greatest culprit may well be the scientific community itself, sometimes purposefully–“There are, unfortunately, few scientific claims so far-fetched that no Ph.D. scientist can be found to vouch for them”–or inadvertently. “[Scientists] are eager to tell people what it’s like on the frontier,” Park writes. “They want to talk about neutrino oscillations, Higgs bosons, cosmic inflation, and quantum weirdness–the things that excite them. And of course they should–this is part of the human adventure–but in doing so they cannot resist pandering to the public’s appetite for the ‘spooky’ part of science. It often seems that the underlying message the nonscientist takes away is that the universe defies common sense, that anything is possible.”

The resulting confusion, exacerbated by scientific arrogance and inaccessibility, wastes lots of time, energy, and money. But annoying as this background noise is, Park believes that it poses no serious threat to science itself: “Something like cold fusion might interrupt the flow of science for a few months, but those who make extraordinary claims must eventually produce the evidence.” The real threat, Park says, “is to the public, which is not often in a position to judge which claims are real and which are voodoo. Those who are fortunate enough to have chosen science as a career have an obligation to inform the public about voodoo science.”

Park is at his best in providing the clear and cogent physics background that exposes the errors in the examples he chooses. The physics lessons that come as part of the book are almost worth the cover price by themselves. Park is on somewhat shakier terms in exploring and explaining how people come to believe what they believe, which forms a central part of his thesis. Still, behaviorists will forgive him a foray into unreferenced explanations of belief systems for the pleasure of watching him lambast yet another mythic machine or threadbare theory.

Sometimes, though, less would be more. The quintessential insider, Park regales us with anecdotes of a naked Allen Bromley, dripping from the shower, accepting the nod from President Bush to be his science advisor. Ruminations about the camaraderie that emerges in the men’s room around the urinal likewise fall into the category of news you really can’t use.

In the jacket notes, science writer K. C. Cole praises Park’s ability to reveal how the things we want to believe keep us from learning the things we need to know. That’s the value of the book; its beauty is the satisfaction of knowing that these stories are just a few of the dispatches from Park’s continuing confrontation with voodoo science.