The Conditions for Admission: Access, Equity and the Social Contract of Public Universities

A nation’s competitiveness in a global knowledge-based economy depends on the education levels of its population. However, the United States no longer leads the world in college completion rates. Inequalities in college access rates across family income classes and racial/ethnic groups have narrowed only slightly over the past 30 years, and inequalities in college completion rates have narrowed even less. The groups in the population that are growing most rapidly are the ones that historically have been underrepresented in higher education. Hence, the issues that John Aubrey Douglass’ book, The Conditions for Admission: Access, Equity and the Social Contract of Public Universities, discusses are very timely. 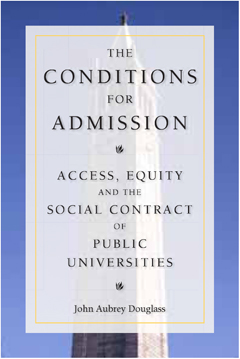 Douglass is concerned with leading U.S. public research universities. Expenditures per student are higher at public research universities than at public comprehensive institutions, where they are in turn higher than at public two-year colleges. A considerable body of research by economists suggests that a student’s economic gains from attending a higher education institution depend on the level of expenditures per student at the institution. However, in most states, the share of students who come from lower- and lower-middle-income families (as measured by the number of Pell Grant recipients) is higher at the public two-year colleges than at the public comprehensives, and is higher there than at the flagship public research universities. Hence the students for whom public higher education is supposed to serve as a vehicle for social mobility are, for the most part, attending the more poorly funded public higher education institutions. A notable exception occurs in California, where a number of the campuses of what is arguably the nation’s finest public research university system, the University of California (UC), rank near the top of flagship publics in terms of the shares of their students who are Pell Grant recipients.

It is thus fitting that, for the most part, The Conditions for Admission is a historical treatment of the UC system and how the criteria used for admission to it have changed over time. But the book is much more than a discussion of changing criteria; it is about changing social pressures and changing interest groups, and about the roles and interests of university administrators and faculty, members of the board of regents, elected government officials, and the public at large. It is also a book about the key role that state funding plays in setting admission criteria. During periods when state funding and tuition revenue are inadequate to allow all qualified candidates to attend the university, admission policies become a way of rationing scarce positions.

The Conditions for Admission is divided into four sections. In the first section, Douglass describes the founding of the UC at Berkeley around 1870 and the evolution of its progressive policy that any student who met prescribed academic qualifications would be admitted, in contrast to the behavior of private academic institutions, which often used sectarian and racial preferences. Because of this policy, the geographic representation of students was always important at UC and later led to the development of multiple campuses around the state. Likewise, providing educational opportunities for women became an earlier concern there than it did at many private institutions. Whereas private higher education institutions often respond to increases in demand by increasing their selectivity, UC felt more of a responsibility to grow to increase access. However, Douglass describes the tension that arose early in its history between its obligation to grow and the lack of state resources to fund it. Some tensions never change.

Over time, the development of the junior college system in California and then the California State system allowed UC to preserve its role as a selective academic institution. Although many private colleges and universities had overt or implicit religious quotas in the 1920s and used standardized tests (which were believed to be culturally biased) and “holistic” admissions processes to keep students (often lower-income) from immigrant families out, the UC system based admission on achievement in a set of prescribed high school classes. But as early as the 1920s, there were some students who lacked some of the requirements but were admitted “by exception”; this category of admits grew somewhat after World War II to accommodate returning veterans. Early on, the importance of cultural diversity meant exposing California’s students to international students.

The second section covers the period from after World War II to 1990. When grade inflation made some wonder about the use of the SAT exam to provide a better measure of comparative student performance across high schools, the UC faculty committee in charge of admissions policies rejected the use of the SAT because it did not add much beyond high-school grades in predicting student performance in college. The 1960s saw the Civil Rights movement and race, rather than class, became much more important in admissions policies. During this period, the divergent interests of faculty (often focused on selectivity) and administrators (concerned with the social goals of diversity and expanding enrollments) came into play, and administrators now used holistic admissions processes as part of the special admissions process to enroll members of disadvantaged groups, rather than keep them out. Pressure on enrollments led to the use of SAT scores to evaluate marginal students, not because SAT scores enhanced the predictive power of models of college performance, but because their use created a veil of an objective criterion being used to ration entry from among the eligible students.

In 1978, the Supreme Court’s Bakke decision prohibited racial quotas but allowed race to be a consideration in admission decisions, and this led to a further use of holistic admissions, as up to half the UC class was now admitted that way. However, the impact of this admission process was to disadvantage Asian Americans, and a relatively new interest group put pressure on the political process and the UC regents to improve their access.

The third section talks about more contemporary experiences. In the 1990s, Board of Regents member Ward Connerly led the campaign to end affirmative action in UC admissions. The board formally voted to ban the use of race or ethnicity in admissions, and in 1996 the voters passed Proposition 209, which formally prohibited the use of race or ethnicity in admissions. To counter this prohibition, UC shifted back to its original concerns about preserving geographic and economic diversity, and the circle was complete. But differences in the wealth levels of communities affected the quality of local schools, and the lack of advanced placement classes at schools in poorer areas limited their students in successfully competing for admission. So consideration of rank in class as an admissions criterion rose, and UC began using holistic admissions criteria to admit a greater share of its entering class.

Although in places readers may wish that the evolution of UC admissions policies were discussed in a little less detail, The Conditions for Admission is an important and well-written book that anyone interested in higher education should find of great interest. It will help the reader to understand that admissions decisions are not clear-cut, that policies disfavored at one time may be favored at another, and that policies adopted for one reason at one time may serve a different purpose at another time. It will also help the reader to understand that the goals of public universities are not always obvious, and therefore the optimal policies that the universities should pursue are also not always obvious. Certainly reading the book has made me less dogmatic about what I believe.

I do have one major quibble with Douglass’ book. He draws a distinction between public universities that have an obligation to behave in the social interest and private universities that have the freedom to unilaterally pursue their own private interests. Although there may be some truth to that view, I would argue that the distinction is not as strong as it may at first seem.

Taxpayers as a whole subsidize private higher education institutions through the favorable tax treatment that the institutions receive: They pay no taxes on their endowment earnings, individuals and corporations that make contributions to them can deduct these from their personal and corporate income taxes, academic institutions’ property used for educational purposes is exempt from local property taxes, and the institutions can borrow money at tax-free interest rates. In return for this favorable tax treatment, private universities are expected to act in the public interest. I have argued that one aspect of this is that they are expected to remain accessible to students from all family-income levels.

Many of the selective private institutions have a much smaller share of their undergraduate students who are Pell Grant recipients than do most other public and private institutions, and the share of Pell Grant recipients at many of the selective private institutions has declined in recent years. With their tuition levels rising at rates exceeding the rate of inflation and their endowments soaring to unprecedented levels, is it any wonder that in the summer and fall of 2007 pressure arose from the Senate Finance Committee for them to spend more from their endowments and devote this added spending to grant aid for needy students?

Acting out of a belated understanding of their social responsibility, or out of fear that Congress would mandate higher endowment spending, the nation’s richest private universities such as Harvard and Yale eliminated all loans from their financial aid offers, while their somewhat less rich competitors such as Cornell and Duke converted at least some of their loans to grants. A number have also announced plans to increase the size of their student bodies. So the distinction between public and private universities in terms of their obligation to act in the social interest may not be as strong as the author believes.