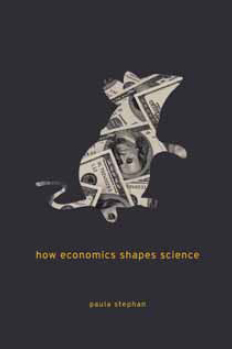 The chorus of praise that has greeted Paula Stephan’s How Economics Shapes Science is well deserved. I am only echoing other reviewers by describing it as learned, insightful, eloquent, and timely. Stephan, an economist at Georgia State University, brings broad knowledge and rigorous analysis to the complex web of social and political forces that are inescapable—but too rarely discussed—part of the scientific enterprise. Stephan’s goal is not to propose any simple economics-based solutions to the conduct of science but to enrich our understanding of the social system in which science operates. This is not reductionist money-talks economics, but a sophisticated discussion that considers, for example, how the interplay of intellectual curiosity, professional reputation, institutional culture, and financial realities influences the researchers’ actions.

Yet, Stephan does pay attention to the bottom line and peppers the book with interesting information about science’s costs. For example, a typical mouse for research costs $17-$60, but a designer mouse with a particular disposition to diabetes or obesity could cost $3,500. A single researcher uses many mice and can spend more than $200,000 a year in mouse maintenance. The author tenders much more information about what it costs to maintain a faculty member and how that differs between private and public universities, across disciplines, and up and down the hierarchy from grad students and postdocs to full professors.

Stephan also cites more general data that has implications for the research enterprise’s overall effectiveness: 50% of highly cited physicists work in a country other than where they were born; 30% of papers by U.S. authors with more than one author have a non-U.S. coauthor; 6% of scientists and engineers produce 50% of published papers.

Throughout the book Stephan encourages readers to think more deeply about all aspects of the research environment. Prizes matter, but many choices determine how effective they are: Is the honor for a single discovery or a life’s work? Who decides on the priority goal to be incentivized? Do too many new prizes steal thunder from established prizes? We know that university scientists are spending more time consulting with the private sector, but we lack detailed data on how extensive this is, how much money is involved, how the nature of the consulting might be changing, and how this form of technology transfer stacks up against other routes. Collaboration is becoming more necessary in research, but we have yet to figure out related questions, such as how to assign intellectual property rights to discoveries made by teams and to acknowledge group achievement in an award system that has traditionally lionized individuals. Generalizations about research are always suspect because its nature differs by discipline and project, varying from the mathematician working alone in her office to the army of scientists and engineers collaborating at the Large Hadron Collider.

The physical capital of research is also changing, and the result is both greater democratization and increased stratification. Advances in information technology have made it easier for researchers to gain access to data from telescopes and gene sequencers. On the other hand, some research requires direct access to very costly lab facilities and equipment that might be available at only a few institutions and thus to only a handful of researchers. Should this changing landscape influence which types of research deserve government support?

In sifting through the details of how research is conducted today, Stephan does identify a few common problems. The procedures for managing the research enterprise were developed for a much smaller system and need to be updated to today’s scale. Slow growth in available funding has made the system too risk adverse, and the research world has become increasingly inhospitable for young researchers.

The most enlightening and disturbing chapters address the conditions and prospects for young people trying to launch careers in science. These chapters need to be read in full to appreciate the complexity of Stephan’s analysis, and she is too wise to propose a simple solution. But she raises serious questions about the economic efficiency of our current system for training future scientists and makes a strong case that the system is fundamentally organized to serve senior researchers at the expense of the young.

This imbalance prevails partly because 44% of U.S. PhD degrees in science and engineering are awarded to students on temporary visas and that almost 60% of postdocs are on temporary visas. Stephan devotes an entire chapter to the plight of many young people who come to the United States from other countries for graduate school and postdoctoral training. These talented young people contribute hugely to research during their training, and most find a way to stay in the United States when their training ends. But Stephan points out the risks of depending on foreign talent. Many countries are devoting resources to attracting scientists and engineers back home, and a sudden change—such as a Chinese ban on study in the United States—could be very disruptive. Stephan does not reach firm conclusions on whether foreign students are “crowding out” native citizens from science and engineering careers, but she does find evidence that the influx of foreign-born postdocs is depressing wages.

When Stephan returns at the end of the book to the relationship of science to economic growth, she aims to disabuse readers of simplistic notions of how university research leads, albeit slowly, to private sector innovation and increased economic productivity. She explains that innovation entails much more than new science and technology, that university intellectual property practices can sometimes slow technology transfer, that the training of researchers who will work in industry is of more immediate value than the research done in university labs, that spillover effects from research done in firms play a critical role. This is not to deny the important contribution of publicly funded research conducted in universities. But it helps us see that making the most of the national investment in research is not a simple matter.

Stephan’s review of some of the possible inefficiencies in the U.S. research system at least sets the course. Universities could be overinvesting in laboratory facilities and equipment to attract more federal research dollars, the nation could be training more PhD scientists and engineers than needed to perform the research we can afford to fund, and the ups and downs of federal research support play havoc with individual careers. The author reminds us that senior scientists and university administrators do respond to incentives, so that policies should ensure that incentives to individuals and institutions align with national goals.

To help young people considering careers in science make good choices, she would require universities to report the career outcomes for the people they train. Further, she would make research less dependent on the work of trainees because this would reduce the incentive for PIs to hire too many grad students and postdocs. She summarizes the argument made by many that training grants and fellowships are a preferable source of support for grad students and postdocs but acknowledges that empirical support for this case is lacking.

As researchers advance in their careers, Stephan would like them depend less on outside funding to maintain their university positions and to have more access to support for collaborative and interdisciplinary research. And she would like to end the “doubling” rhetoric popular among some science advocates. The rapid doubling of the National Institutes of Health budget, she avers, resulted in inefficient use of resources. A more reliable and predictable level of funding would avoid that problem and disrupt careers less.

Stephan ends by speculating about several questions without definitive answers. As she observes, we have no reliable way of calculating what percentage of gross domestic product should go to research, but the nation could probably benefit from spending more than it does now. The heavy U.S. emphasis on biomedical research raises obvious questions about balance, and she is inclined to shift some resources toward the physical sciences and engineering. On the questions of what size grants are most efficient or whether it would be better to fund individuals for long periods rather than projects for short periods, she is agnostic.

A subtitle to Stephan’s book could be: Consider the Counterfactual. Stephan warns against thinking that because something desirable happened—a new medical treatment was developed or a labor-saving device produced—and because it can be linked to some previous scientific research, that we did the right thing in supporting that research. The desirable event might have occurred without the earlier research funding or we might have stimulated even more and better events if we had spent that research money differently. Astutely, the author calls her final chapter “Can We Do Better?”