The Thrill of Discovery

During my first year of college, my organic chemistry professor assigned us Anda Brivin’s book Gun Down the Young, a slim fictional account of professional academic life at an unnamed university. I suspect that she did so because she knew that many of her students were envisioning careers at top-tier research universities and she hoped to cure us of some of our more romantic fantasies of life as academics. Although the book did, indeed, provide some much-needed levity in an otherwise grueling course, Hope Jahren’s Lab Girl might serve future students as a better introduction to the real stories of the ivory tower. 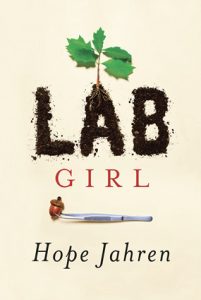 Early in Lab Girl, Jahren recounts late winter evening visits to her father’s laboratory at a community college in rural Minnesota, where she “transformed from a girl into a scientist, just like Peter Parker becoming Spider-Man, only kind of backward.” The rest of the book serves as a reflection on that transformation, an exploration of the forces that drove—and hindered—Jahren’s journey from frosty Minnesota to California, Georgia, Maryland, and Hawaii.

This journey is not often recounted. Scientists from every discipline will recognize Jahren’s lament about the necessity of “distilling ten years of work by five people into six published pages, written in a language that very few people can read and that no one ever speaks.” There is no doubt that Jahren is very, very good at this distillation: among her honors are three Fulbright awards; Young Scientist awards from both the American Geophysical Union and Geological Society of America; and recognition by Popular Science and Time as an influential scientist. But as she tells the reader, “there’s still no journal where I can tell the story of how my science is done with both the heart and the hands.” And so she has given readers Lab Girl, and we are all luckier for it.

Heart drives Jahren’s narrative, an unbounded love of and curiosity about the natural world. She interweaves her story of becoming a geobiologist with stories of how tiny seeds struggle to become (or, more frequently, fail to become) seedlings, then saplings, then towering trees. Jahren uses these passages to inspire a sense of wonder, to illustrate that discovery and mischief are two sides of the same science coin, and to spur readers to ask questions and become a scientist. And once we grow to love the plants that Jahren loves, she breaks our hearts, lamenting the reduction of plants to commodities and the rapid pace of deforestation (“One France after another, for decades, has been wiped from the globe”), and in the epilogue concluding that her “job is about making sure there will be some evidence that someone cared about the great tragedy that unfolded during our age.”

In this regard, Jahren is following in the footsteps of other scientists who have found popular success with their writing. Like biologist and author E. O. Wilson, she steps beyond the confines of journals and textbooks, drawing on her experience as a researcher and the work of colleagues to highlight the present environmental crisis. Jahren has a light touch when it comes to the hotly debated issue of where the lines between science, policy advice, and advocacy lie; whether and how scientists might cross those lines; and if by crossing those lines scientists risk their credibility. She focuses on what individuals might do, for example, to replace trees in their own communities, rather than suggesting broader policy change. By focusing on what each reader can do, she overcomes a common critique of scientific reports chronicling environmental problems: that after delivering gloomy results, they do nothing to suggest productive actions, especially responses at the household level.

More than an ode to the natural world, though, Lab Girl is a story of the heights and heartbreak of the practice of science, cataloging the workaday life of a scientist on the path from student to assistant professor to tenured faculty. Jahren’s story is full of reasons why she loves science: the satisfaction of attacking problems (“in science classes we did things instead of just sitting around talking about things”), the thrill of discovery (“the overwhelming sweetness of briefly holding a small secret the universe had earmarked just for me”), and the many ways in which her laboratory is her true home. Most of the chapters illustrate these reasons with anecdotes from Jahren’s research career—using exploding glassware, police visits to impromptu fieldwork campsites, lost and ruined samples, experiments that failed to bear fruit, and late-night breakthroughs in isotope chemistry—to fight back against the “disrespectful amnesia” that removes the practice of science from most research reports.

These are the sort of tales that scientists share over pints of beer or plates of food. But as Jahren points out, that sharing is often limited to specific audiences (generally scientists of the same generation, race, and gender), and so she has often “stood alone [at a conference or seminar] … apparently radiating cooties and so excluded from the back-slapping stories of building mass spectrometers during the good old days.” Such storytelling serves a greater purpose than catching up with old friends; it is a lifeline for young scientists who otherwise might fall victim to imposter syndrome, believing that a failed experiment validates their internal doubts about their abilities as a scientist. These stories provide a context for failure by acknowledging that, as Jahren put it, “if there had been a way to get to success without traveling through disaster someone would have already done it and thus rendered the experiments unnecessary.” By excluding graduate students, female scientists, and other minority groups from storytelling, the larger community of scientists does a disservice to the future of the scientific workforce. A growing number of fieldwork blogs, discussions about imposter syndrome and failure at scientific conferences, and books like Lab Girl are helping make those stories more accessible.

Perhaps the least visible (to the public) but most pressing task of an academic scientist is the pursuit of funding. According to Jahren, “I need to do about four wonderful and previously impossible things every year until I fall into the grave in order for the university to break even on me.” And that’s before the cost of lab supplies, paper, and staff. Chasing federal and private grants, and the stagnant or decreasing amounts available from these sources, is a task that Jahren discusses at length. She walks readers through the intricacies of university overhead rates, the budgets of the National Science Foundation and the Department of Homeland Security, and the overabundance of PhD scientists compared with available money. For academic scientists who are all too familiar with the current low success rate of their grant proposals, this discussion will result in either a lot of head nodding or cries of agony from something akin to post-traumatic stress. For non-scientist readers, the discussion will provide a window into what scientists do after the rest of the world has gone to bed. The readers who stand to gain the most from these sections, however, are those who aspire to join the ranks of academia. Like the tales of success and failure in the lab, these stories of 3:00 a.m. grant writing, pinching pennies until the next payment arrives, and not being able to pay staff enough are tales that need to be told.

Jahren’s lab manager, Bill Hagopian, is a central character in Lab Girl. Their scientific partnership began when Jahren was an assistant instructor for a field course in which Hagopian was a student. “I didn’t so much meet Bill. It was more like I identified him,” she says of that fateful day. Their working relationship and friendship is explored from many angles, with Jahren as the one to “cook up a pipe dream” and Hagopian as the one in charge of prototyping and mechanics; Jahren as the lumper and Hagopian as the splitter when it comes to soil classification; Hagopian as the patient teacher long after Jahren has grown frustrated with a student who is progressing slowly. In the end, Lab Girl stands as a testament to the fruitfulness of that collaboration. Yet Jahren notes that the hiring and funding structures at universities that have granted her tenure and provided at least several months of her salary have denied Hagopian the same long-term job security, something she feels guilty about because she is the one who brought him into the lab in the first place.

Lab Girl arose from Jahren’s need to tell the secrets of science to someone, not as advice or caution, but as “one scientist to another.” She does not aim to synthesize all that she knows on one topic or another, or find deeper thematic threads. Instead, she conveys the way in which she “will never stop being ravenously hungry for science” regardless of the obstacles and bureaucracy she finds along the way. In pulling back the curtain on what lies at the heart of science, she challenges readers to find their own passions and to pursue them relentlessly.