Much of what Americans think they know about people without health insurance is wrong. National polling data and market research reveal that the popular wisdom is that the number of uninsured people is small, includes largely healthy young adults who volutarily forego coverage or are unemployed, that recent immigrants account for much of the increase in the number, and that the uninsured manage somehow to get the medical care that they need. Peer-reviewed findings from health services research, economics, and the clinical literature paint a markedly different picture: The United States has a longstanding, sizable, and growing uninsured population of about 40 million people, roughly one out of every seven Americans, and being uninsured can have serious medical and economic consequences, not only for individuals but for their families as well.

The uninsured are less than half as likely to receive needed care for a serious medical condition. They have fewer visits annually and are more than three times as likely to lack a regular source of medical care as are those with either private or public health insurance. Uninsured persons receive fewer preventive services and less care for chronic conditions than do the insured.

Informing the public and policymakers is an essential first step in addressing the problem. The Institute of Medicine’s Committee on the Consequences of Uninsurance has begun a comprehensive effort to refocus policy attention and stimulate public debate on the issue. The data presented here are taken from Coverage Matters: Insurance and Health Care (National Academy Press, 2001, www.iom.edu/uninsured), the first of six scheduled reports.

The size of the uninsured population

MYTH: The number of uninsured Americans is not particularly large and has not been increasing in recent years.

REALITY: During 1999, about 15 percent of the population was uninsured. Almost three out of every ten Americans–more than 70 million people–were uninsured for at least a month over a 36-month period from 1993 to 1996. Although the uninsured population decreased slightly in 1999, the long-term trend has been a growing uninsured population. Without substantial restructuring of the opportunities for coverage, this trend is likely to continue. 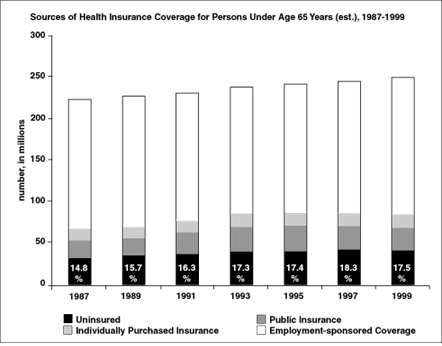 MYTH: Most of the uninsured don’t work, or they live in families where no one works.

REALITY: More than 80 percent of uninsured children and adults under age 65 live in working families. Although working improves the chances that the worker and his or her family will be insured, even people in families with two full-time wage earners have almost a one-in-ten chance of being uninsured. 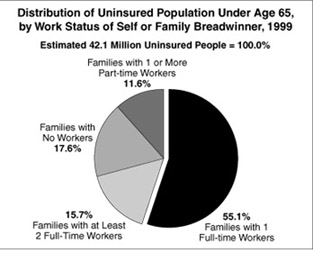 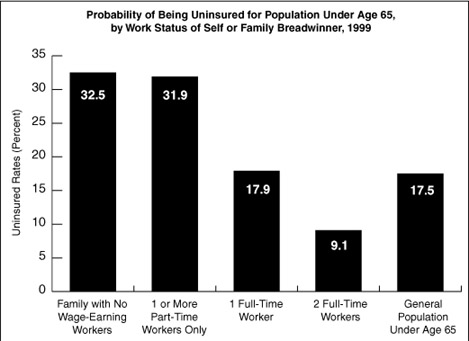 Immigrants and the uninsured population

MYTH: Recent immigration has been a major source of the increase in the uninsured population. 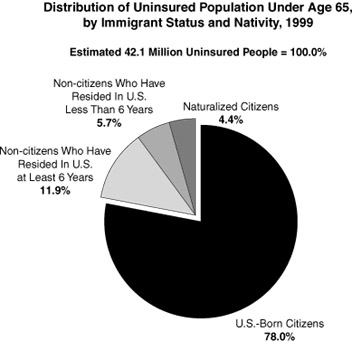 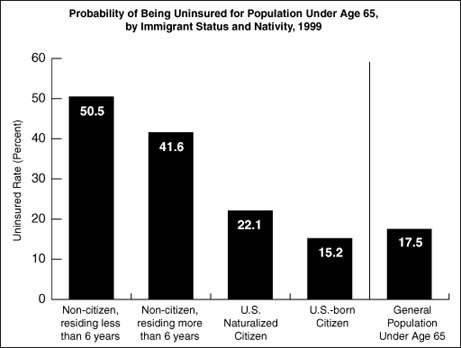 Who declines coverage and why

MYTH: People without health insurance are young, healthy adults who choose to go without coverage. 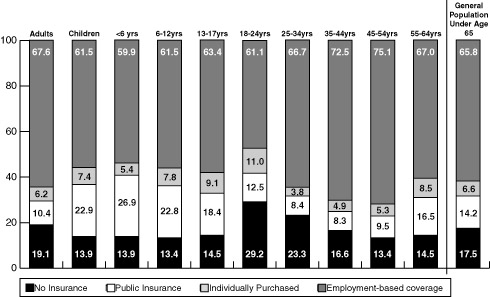