The Small Business Innovation Development Act of 1982 created the Small Business Innovation Research (SBIR) program to stimulate technological innovation, to use small businesses of 500 or fewer employees to meet federal R&D needs, to foster and encourage participation of minority and disadvantaged persons in technological innovation, and to increase private sector commercialization of innovations derived from federal R&D. In 1983, this set-aside program totaled $45 million. The SBIR program grew to nearly $2 billion by 2008 when Congress failed to reauthorize it. For several years it survived through a series of multi-month extensions, and at the end of December 2011 it was finally reauthorized for another six years.

In 2000, Congress mandated that the National Research Council (NRC) conduct an evaluation of the economic benefits achieved by the SBIR program and make recommendations to Congress for improvements. Part of that evaluation exercise involved an extensive survey in 2005 of more than 6,000 Phase II projects funded between 1992 and 2001 by the Department of Defense (DoD), the National Institutes of Health (NIH), Department of Energy (DOE), the National Aeronautics and Space Administration (NASA), and the National Science Foundation (NSF). Typically, the Phase II studies lasted for not more than two years and were capped at $750,000. The accompanying figures track several performance characteristics of the SBIR program based on our analysis of the 1,878 randomly selected projects conducted at firms that responded to the NRC survey.

Who are the major SBIR funders?

Agencies allocate 2.5% of their extramural research budget to their SBIR program. DoD ($943 million) and NIH ($562 million) are the largest SBIR funding agencies, followed by DOE, NASA, and NSF. 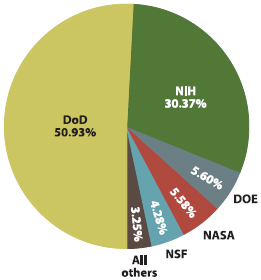 The SBIR program aims to fund projects that firms would not have undertaken because of their risk and uncertainty and other barriers to innovation such as limited access to scientific equipment. When an awarded firm was asked if it would have undertaken the funded research project in the absence of its SBIR award, respondents generally said “no.” Table 2 shows that over 60% of those surveyed responded “probably not” or “definitely not”; and fewer than 20% responded “probably yes” or “definitely yes” to this counterfactual question.

Would the research be performed without SBIR support?

Does SBIR-funded research result in products? 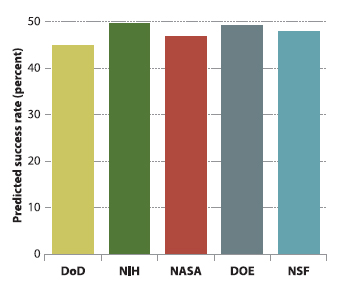 Although job creation is not an explicit objective of the SBIR program, policy discussions related to the current reauthorization of the program focused on employment effects. The direct, short-term employment effects attributable to SBIR funding are small. That is, as shown in Table 4, the number of employees retained as a result of the technology developed during the funded project is on average less than 2. 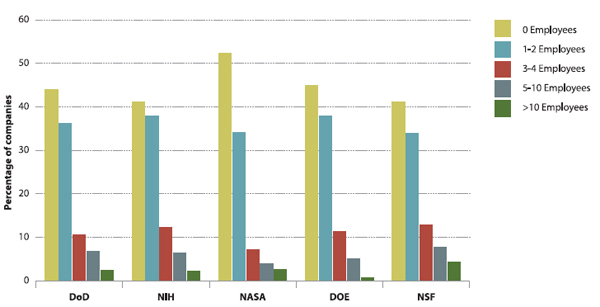 Does SBIR have a long-term effect on employment?

Note: Employment gains were measured among NSF-funded projects, but those gains were less than the gains predicted in the absence of an SBIR award.