Everybody has ideas about how to solve traffic congestion, but the job is trickier than it seems, as a new report examining recent trends in computing patterns makes clear. Commuting in America III, published in October 2006 by the National Academies’ Transportation Research Board, finds that commuting patterns continue to evolve in complex and often surprising ways. The difficulty of accurately predicting the future presents obvious problems for policymakers.

Two major demographic forces are affecting commuting patterns: the declining influence of the baby boom generation and the simultaneous advent of a large immigrant population joining the workforce. As the baby boom generation retires, growth of the working population, ages 18-65, is projected to slow dramatically between 2010 and 2030. Would fewer workers mean fewer drivers? Not necessarily. First, the percentage of people 65 and older who are working has increased in recent years (from 11.2% in 1990 to 12.7% in 2005) and is expected to rise even further; on the other hand, older workers tend to shift from single-occupancy vehicles (SOVs) to more carpooling, walking, and working at home. Second, and more important, the projections of the future number of workers are highly dependent on immigration estimates, which have been wrong before and are likely to be wrong again, especially because immigration rates can be abruptly changed by an act of Congress. Immigrants, meanwhile, seem to be contributing to congestion relief because so many of them carpool, walk, ride bicycles, and take transit. Yet the data indicate that the longer immigrants are in the country, the more they convert to the preferred U.S. mode of travel: the SOV.

Although driving alone to work continued to increase through 2004, there were signs of stabilization during the 1990s as growth rates slackened. Most significantly, there were five metropolitan areas where the SOV share actually declined from 1990. All losses were quite small: under 1%, except for Seattle, with a decline of about 1.5%.

SUBURBAN SPRAWL, RURAL DEVELOPMENT, IMMIGRATION, AN AGING POPULATION, CHANGING WORK HABITS. WHAT EFFECTS ARE THEY HAVING ON THE NATION’S TRANSPORTATION SYSTEMS?

The expanding size of metropolitan areas is having substantial repercussions for commuting and travel time. This geographical expansion has largely been driven by the desire among Americans for bigger, better, cheaper housing in suburban areas. As workers have moved, employers have followed. Yet these shifts in the location of workplaces have not led to shortened commutes. Rather, they have allowed workers to move even further from the city center in search of cheap housing and enabled workers living in rural areas and even other metropolitan areas to compete for those jobs. (In the process, commutes of more than 60 minutes and “extreme” commutes of more than 90 minutes have become more common.) Consequently, many commuters now cross multiple counties on their way to and from work. These cross-county patterns indicate that solutions to traffic congestion will increasingly need to be regional in nature.

Another complicating factor in computing patterns is that an increasingly large number of people do not drive directly to and from work; they stop multiple times along the way: to buy coffee in the morning, to drop off and pick up children at day care or school, to visit the gym, to buy groceries, and so forth. These “trip chains” save time and have probably been the central factor in the continued growth of SOVs (the number of new solo drivers grew by almost 13 million in the 1990s). At the same time, this commuting pattern makes alternatives such as transit and carpooling even less attractive.

Yet another factor complicating commutes is that the length of the peak morning and evening commuting periods has increasingly lengthened. For instance, the number of people beginning their commutes before 6 a.m., and even 5 a.m., has risen significantly.

Worker schedules and commuting flow patterns continue to make alternatives to the SOV problematic, with one exception: working at home is the only “mode of transportation” other than driving alone that has grown throughout the entire baby boom period. Aided recently by the telecommunications revolution, it has now passed walking as a way to get to work and is third behind carpooling in most metropolitan areas. There may be ways for policymakers to abet this natural growth.

Computing patterns have become more diverse and complicated, with some people commuting from rural to suburban areas to work and some commuting between metro areas. 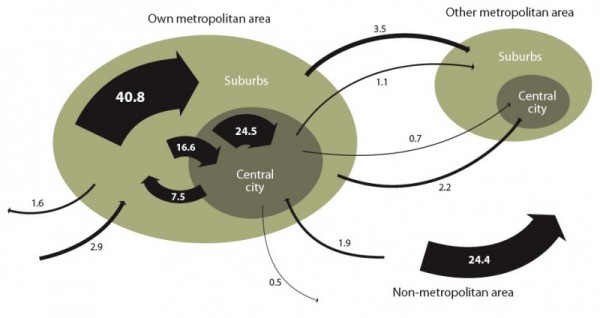 Where the cars are

Growth in suburb-to-suburb commuting now swamps growth in the “traditional” commute from suburb to central city. 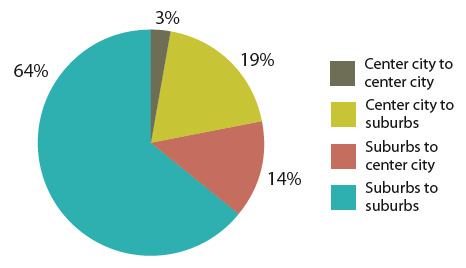 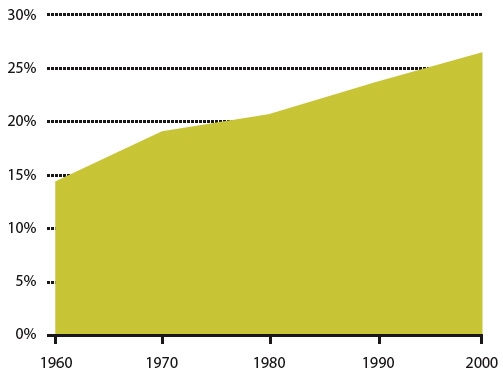 Congestion is increasing in all metropolitan areas, but most markedly in those areas with more than 5 million people (there are now 12 of them, accounting for one-third of the nation’s population).

Rock around the clock

One reason for increased congestion during peak commuting periods is that more people, especially time-pressed working mothers, are doing more family and personal business on their way to and from work.

The fastest rate of growth took place among commuters leaving home before 6:30 a.m. This group, which accounted for 36% of total commuter growth in the decade, was probably motivated at least in part by a desire to avoid heavy congestion during peak commuting periods.

The number of extreme commutes has grown substantially in recent years. In 2005, more than 10 million workers needed more than 60 minutes to drive to and from work; a third of those needed more than 90 minutes.

Working at home is the only “mode of transportation,” other than driving alone, in which there has been continuous growth since 1980. The number of people working at home almost doubled between 1980 and 2000, increasing by 2 million workers. By 2005, it had increased by another 600,000, to 4.2 million.

Transportation choices of over-55 workers

As workers age, there is a significant shift away from single-occupant vehicles (from about 80% to 68%), slight gains in carpooling, and major shifts to walking and working at home.

Mode use by years in United States

Immigrants constitute only 13.5% of all workers, but are significant users of non-single occupant vehicle modes of transportation. For example, immigrants constitute more than 40% of larger carpools. But the longer they live in the United States, the more likely they are to drive a car alone to work. 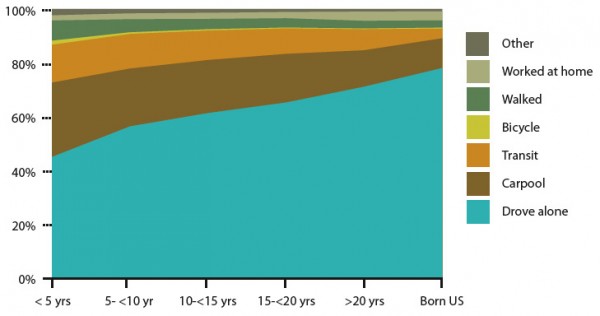