A university-related research park is a cluster of technology-based organizations (consisting primarily of private-sector research companies but also of selected federal and state research agencies and not-for-profit research foundations) that locate on or near a university campus in order to benefit from its knowledge base and research activities. A university is motivated to develop a research park by the possibility of financial gain associated with technology transfer, the opportunity to have faculty and students interact at the applied level with research organizations, and a desire to contribute to regional economic growth. Research organizations are motivated by the opportunity for access to eminent faculty and their students and university research equipment, as well as the possibility of fostering research synergies.

Research parks are an important infrastructure element of our national innovation system, yet there is no complete inventory of these parks, much less an analysis of their success. The following figures and tables, derived from research funded by the National Science Foundation, provides an initial look at the population of university-related research parks and factors associated with park growth.

The oldest parks are Stanford Research Park (Stanford University in California, 1951) and Cornell Business and Technology Park (Cornell University in New York, 1952). Even though by the 1970s there was general acceptance of the concept of a park benefiting both research organizations and universities, park creation slowed at this time because a number of park ventures failed and an uncertain economic climate led to a decline in total R&D activity. The founding of new parks increased in the 1980s in response to public policy initiatives that encouraged additional private R&D investment and more aggressive university technology transfer activities. Economic expansion in the 1990s spurred another wave of new parks. 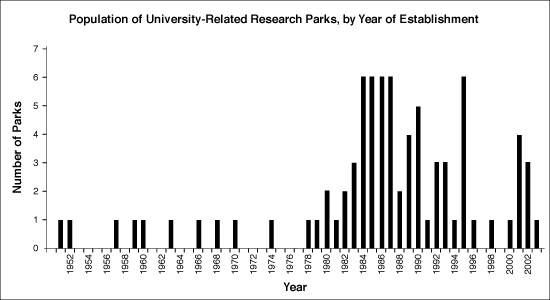 States with the most university research activity have the largest number of parks, but this has not been a simple cause-and-effect relationship. State and university leadership has historically been a critical motivating factor for developing parks. 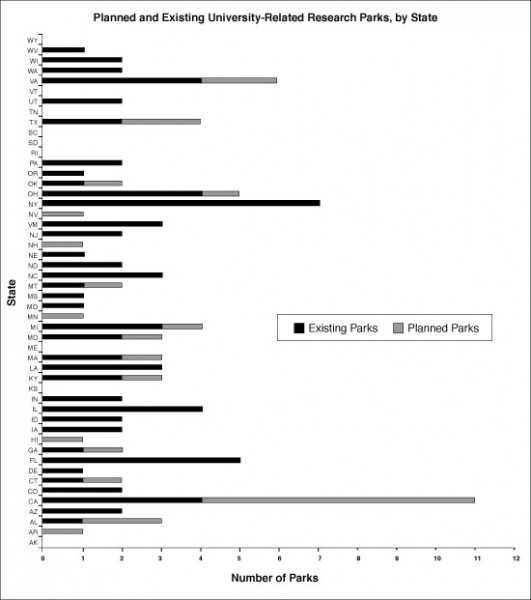 Most parks are related to a single university and are located within a few miles of campus, but are not owned or operated by the university. About one-half of the parks were initially established with public funds. As parks have grown, the technologies represented at parks have expanded, and incubator facilities have been established. Park size varies considerably. Research Triangle Park (Duke University, North Carolina State University, and the University of North Carolina; 1959) has 37,000 employees on a 6,800-acre site. Research and Development Park (Florida Atlantic University, 1985) has 50 employees on a 52-acre site.

Many park directors associate park employment growth with park success, and this table compares the growth rates of parks having certain characteristics with the average rate for all parks. Parks with a single dominant technology, located very close to campus and managed by private-sector organizations, are the faster-growing parks. The fastest-growing newer park is the University of Arizona Science and Technology Park (1995), which has been adding an average of more than 1,100 employees per year. The fastest-growing of the older parks is Research Triangle Park, which has been adding an average of almost 950 employees per year since its founding in 1959.

Since Date of Establishment,

Averaged over the Population of University-Related Research Parks