By Stephen A. Merrill

A major theme of the National Academies’ 2007 report, Rising Above the Gathering Storm, and a major premise of the 2007 America COMPETES Act and its 2010 reauthorization was that the nation urgently needed to boost funding of research in the physical sciences and engineering (PS&E) after a decade-long decline precipitated by the end of the Cold War.

The COMPETES Act authorized a doubling of research funding over seven years (later extended to eleven years in the 2010 reauthorization) through the National Science Foundation, National Institute of Standards and Technology (NIST), and Department of Energy (DOE) Office of Science on the reasonable presumption that much of the increase would go into PS&E fields. Interestingly, on the same premise, Rising Above the Gathering Storm singled out only Department of Defense (DOD) research as meriting increased support. It was perhaps to be expected that Congress would focus on civilian agency rather than military service budgets to rectify the decade-long neglect of most PS&E fields, but shifting the attention had important consequences.

Although the COMPETES reauthorization has a year to run, it is not premature to assess progress in righting the “imbalance” in the federal research portfolio. The Congressional Research Service estimated that if current trends continue, the desired doubling will not take place in 7 years or 11 years or even 15 years. A review of actual funding from 2001 to 2011 (using data available from the National Science Foundation’s federal funds survey) reveals that funding of the physical sciences is virtually flat and funding of engineering has declined.

Stephen A. Merrill ([email protected]) is director of the National Academies’ Board on Science, Technology, and Economic Policy. 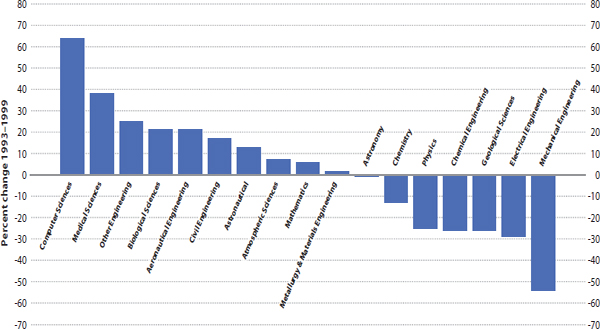 Funding of physical science research increased only slightly (0.3%) from 2001 to 2011, and engineering research has actually declined by 4.3%, while overall research expenditures rose 8.1%, and life sciences increased 7.0%.

These figures exclude the two years of American Recovery and Reinvestment Act (ARRA) research funding because the National Science Foundation decided not to add to agencies’ reporting burden for “stimulus” expenditures by asking them to disaggregate them by research field.

Federal funding of broad felds of research, FY 2001-2011 (not including ARRA) 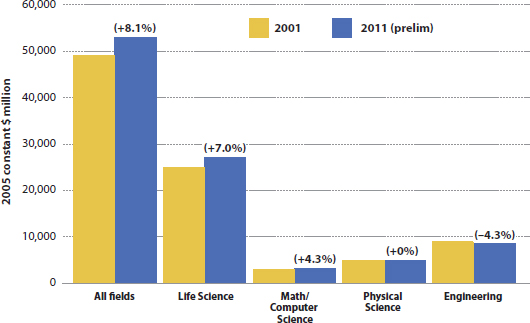 But it turns out that three-quarters of the $13.1-billion (in 2005 dollars) ARRA boost to research spending in FY 2009 and 2010 went to the National Institutes of Health, primarily for research in the biological and medical sciences. 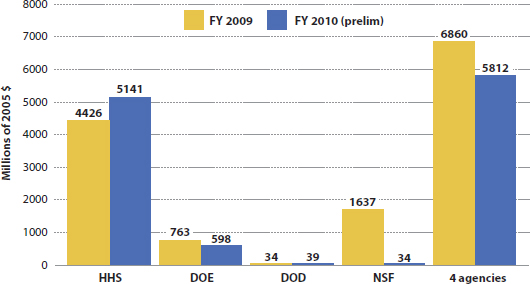