In a September 10, 2010, Science editorial, Bruce Alberts called attention to what he perceived to be an overbuilding of biomedical research facilities by the nation’s universities and medical schools, driven by the federal government policy of providing reimbursement of the amortization costs incurred by institutional borrowing to construct these facilities. Based on this premise, Alberts called for a reconsideration of that policy, a plea recently reiterated in the highly cited July 1, 2014, Proceedings of the National Academy of Sciences article that Alberts co-authored with Harold Varmus, Shirley Tilghman, and Mark Kirschner. That article also addressed a number of other issues, such as the size of the biomedical research workforce, which we do not consider here.

The profound implication of a change in reimbursement policy compels us to carefully examine the premise that there is an excessive amount of biomedical research infrastructure. Were the government to cease providing reimbursement of these amortization costs, the ability of most universities and medical schools to offer research facilities when they are needed would be limited drastically. Although the government has made academic biomedical research a national priority since the end of World War II, and underscored that priority during the recent five-year doubling of the National Institutes of Health (NIH) budget, it has not provided significant funds for the construction or renovation of the buildings in which the research is to be performed since 1970. Instead, the academic institutions must pay the construction or renovation costs up front and hire research teams, often with substantial “start-up packages,” in the hope they will be successful in competing for federally sponsored research funds. Frequently, the institutions must borrow the money needed for construction. When the institutions’ staff members are successful in obtaining federal research grants, a portion of the construction costs are recovered via indirect cost reimbursement, based on the fraction of the space used for federally funded research. Without this reimbursement, few institutions could afford the construction. It is this reimbursement of borrowed money, recovered over the estimated lifetime of a facility, that the Alberts proposal would eliminate.

It should be noted that this federal government approach of expecting institutions to construct facilities and hire research staff is of substantial benefit to the government and the nation. Because the government’s extramural research programs do not have a commitment to the specific facilities institutions have constructed or to the researchers on an institution’s payroll, they can fund the research proposals that the peer review system deems to be the best. The institutions take on all the financial risk in creating the facility and the substantial financial expense in its initial staffing and operations.

To our knowledge, however, no data have been provided to support Alberts’s premise that there is more national biomedical research space than is necessary to meet the nation’s needs. We seek to remedy that situation somewhat by providing such an assessment, admittedly coarse-grained, and to present some of the policy implications that would result.

A useful proxy for the need for academic biomedical research space is the amount of NIH research and training funding competitively awarded to researchers at universities and medical schools. That funding is the primary determinant of the numbers of researchers and trainees, the range of investigative activities, and the research instrumentation and special facilities that generate the need for research space. 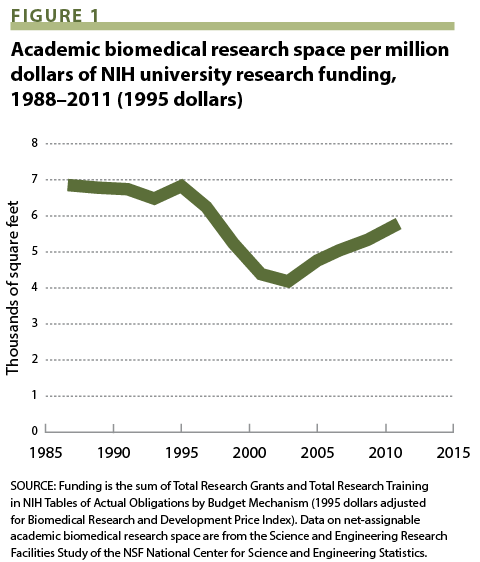 Figure 1 presents the evolution of the ratio of academic biomedical research space to inflation-corrected NIH academic research and training funding from fiscal years 1987 to 2011. That ratio is essentially constant at slightly below 7,000 square feet per million dollars between 1987 and 1995. It then drops sharply to a minimum value of about 4,300 sq ft/$M in 2003 and rises to a value of only 5,700 sq ft/$M in 2011 (the last year for which data are publicly available).

If 7,000 sq ft/$M is taken as a reasonable proxy for a “norm,” the data suggest that even in 2011, eight years after completion of the five-year doubling of the NIH appropriation, and one year after the publication of Alberts’s Science editorial, there was a significant “shortage” of academic biomedical research space, and that the space construction initiated during the doubling was in response to real research needs and opportunities. Certainly, these data provide no evidence of overbuilding of that space.

Given the absence of evidence for systemic overbuilding, there is no apparent justification for altering federal reimbursement policies related to the construction of research facilities. As indicated above, the nation is critically dependent on academia’s ability to construct or renovate facilities as the need arises because the NIH has not provided any significant direct funding for construction of extramural research facilities for more than four decades. It seems unwise to put in place policies that discourage such academic construction. To cite just one example, the current Ebola epidemic reminds us that we must retain an adequate supply of space to conduct research on dangerous pathogens in safe, dedicated facilities.

It may be, though, that some institutions or classes of institutions have overbuilt. Suppose, hypothetically, that there is a group of institutions that had the average ratio of space-to-funding prior to the doubling. Then, they built more space in response to the rapid growth in NIH funding, but did not succeed in acquiring the average funding per unit space. For example, during and immediately following the NIH doubling, there was substantial construction of new research facilities in medical schools, across the spectrum of past success rates in winning NIH research awards, as well as recruitment of research faculty expected to continue their NIH funding or obtain new funding. Moreover, many new medical schools, established in the past decade, often with state support and largely justified by concerns over population aging and predictions of physician shortages, have publicized their construction of “state of the art” research facilities and their intention of engaging in biomedical research, developing robust technology transfer programs, and attracting new “high-tech” industries to their regions. If these institutions were removed from the tally on the graph, it would make the situation look even worse for the remaining institutions, whose average space-per-unit funding would have decreased more than what is shown on the graph. This would make a policy change that seeks to limit reimbursement for construction debt even more unwise. This and related possibilities are worthy of analysis if relevant data are available.

It is possible that construction underway in 2011 and subsequently has or will alleviate the apparent shortage of research implied by the data in Figure 1 and overshoot the mark. That remains to be seen. Similarly, it is conceivable that the practice of biomedical research may evolve in ways such that less space per dollar is needed, although we have difficulty envisioning this. In any event, speculation based on these possibilities is not a sound basis for potentially damaging policy changes or a substitute for careful analysis.

The elimination of government reimbursement of the amortization costs incurred by institutional borrowing to construct or renovate research facilities would markedly decrease the ability of universities and medical schools to provide new or modernized facilities as they are needed to exploit new and exciting technologies, to improve safety, and to respond to new research opportunities and needs. Biomedical research and the nation would suffer as a consequence.

Arthur Bienenstock ([email protected]) is professor of photon science (emeritus) and special assistant to the president for federal research policy at Stanford University. Ann M. Arvin is vice provost, dean of research, and Lucile Salter Packard Professor of Pediatrics and Microbiology and Immunology at Stanford. David Korn is a professor of pathology at Harvard Medical School and the former inaugural vice provost for research at Harvard University.