Our Children's Toxic Legacy: How Science and Law Fail To Protect Us From Pesticides 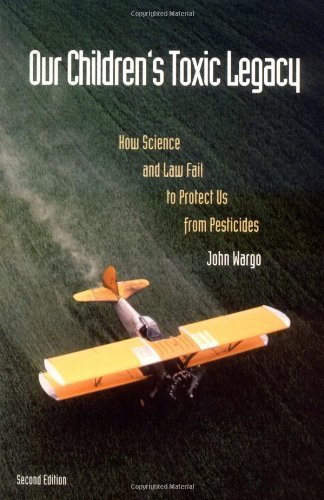 Pesticides are chemicals designed to kill living things-insects, fungi, and weeds that attack crops and other vegetation, cause infectious diseases in humans and animals or act as vectors of infectious agents. Not surprisingly, they are toxic to nontarget species, including birds and humans. There are 600 pesticides currently registered for use, of which 325 are known to remain as residues in food products; and 60,000 products include pesticides among their ingredients. Several hundred billion pounds of pesticides have been produced and released into the global environment. Nevertheless, pests still destroy an estimated 37 percent of the annual global production of food and fiber crops, and diseases thought to be controlled by the eradication of insect vectors, such as malaria and dengue fever, are resurgent. Huge numbers of agricultural workers and their families are exposed to pesticides and are generally poorly educated in the safe use of such chemicals. The rest of us are exposed at much lower levels through contamination of drinking water, air, and food by pesticides, and especially by too-casual use of pesticides in and around the home.

John Wargo, a professor of environmental policy at Yale University, served as a consultant for two major National Research Council (NRC) reports dealing with pesticides: The Delaney Paradox (1985-87) and Pesticides in the Diets of Infants and Children (1988-93). Our Children’s Toxic Legacy: How Science and Law Fail To Protect Us From Pesticides provides a very good insider’s account of the challenges identified and addressed by those panels, a comprehensive examination of pesticide use and regulation, and a proposal to focus science and regulation on protecting children against risks from pesticide residues. Wargo covers the history and ecology of pesticide use, the properties that lead to persistence and/or widespread dispersal of these chemicals, the reasons for insect resistance, some crop management strategies underlying more efficient use of modern pesticides, and the responsibilities and poorly coordinated approaches of the U.S. Department of Agriculture (USDA), Environmental Protection Agency (EPA), and Food and Drug Administration (FDA). Some of these sections take the reader pretty far from the major thesis of the book, captured in the title, but the book is loaded with interesting data and distressing problems.

Wargo’s major theme is that agricultural interests have dominated pesticide regulation for decades and have helped create an expensive and ineffective regulatory morass that puts consumers, especially young children, at risk from pesticide residues in food. Arguing that the institutional structure for controlling the distribution and uses of pesticides has been insensitive to new information about risks and benefits, he proposes that there be clear quality standards for evidence used to estimate risks; robust analysis of the variance and uncertainties in the magnitude and distribution of exposure and risks, especially for children; greater understanding of the legal, organizational, educational, and cultural conditions surrounding pesticide use; estimation of the cumulative effects of exposures to multiple agents; and a regulatory system in which the burden of proof of safety is placed squarely on the producers. Furthermore, he wants effective communication with the public about risks as well as international agreements to maintain and share records of pesticide use, labeling, and regulatory status. He supports replacing the Delaney Clause, which bans the sale of any food product that contains any trace of a carcinogenic pesticide that concentrates during food processing, with a rule that would permit the presence of pesticides at levels that cause only negligible risk but would expand protection to include all health effects (not just cancer) and would include all pesticides (not just those that concentrate during food processing). Most of all, he wants to replace the provisions in the Federal Insecticide, Fungicide, and Rodenticide Act and the Federal Food, Drug, and Cosmetic Act that require that the risks associated with a chemical outweigh its benefits before its use can be banned with a standard that would forbid the use of all chemicals that create a more-than-negligible risk to human health. After calling for all of these technical assessments, however, he predicts that future historians will be “puzzled over the late-twentieth-century obsession with technical forms of analysis that distracted us from seeing the relatively simple moral dimensions of the pesticide problem.”

Issues readers who are veterans of NRC panels (or other advisory groups) will find it interesting that both panels went far beyond the standard evaluation of existing literature. Both determined that the published literature was inadequate for their task, that existing federal databases had not been tapped, and that new analyses should be conducted from primary data in EPA and FDA files. As related by Wargo, the Delaney Committee tried to judge the effectiveness of federal law in controlling cancer risks from pesticide residues in foods. To estimate exposure, they tried to link food intake data collected by USDA, data on tolerances (maximal allowable concentrations) for pesticide residues in foods set by EPA, and data collected by FDA on actual residue levels in foods. The data systems were completely incompatible. Acknowledging the deficiencies of the data, the committee used what it had to develop its best estimate of risk.

Although published with careful caveats, the conclusions were criticized by manufacturers and farmers for assuming that everyone ate all the foods and that the foods were contaminated at the maximal allowable level, and by environmentalists and consumer advocates for ignoring the combined effects of exposure to numerous pesticides. Nevertheless, the committee did identify the “paradox”: The zero-risk standard of the Delaney Clause was so stringent that it was rarely enforced. The committee claimed that switching to a negligible-risk approach would eliminate 98 percent of the risk attributed to the 28 carcinogenic pesticides that they studied closely. But risk for whom? Are some people at markedly different risk due to age, genetics, multiple exposures, particular dietary habits, marked variation in level of residues, and other factors? Yes indeed, say Wargo and everyone else who has examined this question. The most important subgroup that was systematically neglected was young children, whose diets are dominated by fruit juices and vegetables, whose intakes are much higher per kilogram of body weight, and whose developing organ systems and metabolism make them more vulnerable. Thus, promptly after publication of The Delaney Paradox, the NRC Board on Environmental Studies and Toxicology launched the panel that produced Pesticides in the Diets of Infants and Children. After protracted efforts to penetrate the FDA databases, landmark analyses were published. These are summarized in considerable detail in Wargo’s book and reflected in his recommendations. However, the government was slow to take action to better protect young children in the years after Pesticides in the Diets of Infants and Children was published.

Formal nongovernmental dialogues bringing together industry, consumer, and environmental advocates finally framed a consensus that the Clinton administration and the Congress could embrace with the Food Quality Protection Act of August 1996. Unlike the “regulatory reform” proposals of the 104th Congress that generated heated debate, this bill reflected a bipartisan compromise that offered something for everyone. Deregulatory forces welcomed the end of the Delaney Clause absolutism with respect to pesticide residues, and environmentalists and consumer advocates were pleased that tolerance levels were reduced to reflect the vulnerability of children.

Moving quickly to implement the 1996 legislation, EPA announced in March 1997 the establishment of a single health-based standard for all pesticide residues in both raw and processed foods and a risk-based approach along the lines recommended by the Presidential/Congressional Commission on Risk Assessment and Risk Management. When establishing tolerance levels, EPA will now use an additional 10-fold safety factor to reflect the risk to children (0.001 instead of 0.01 of the no-observed-effect level in rodents), unless there are sufficient data to justify a smaller evidence-based safety factor. EPA’s analyses will aggregate exposure to the specific pesticide from all nonoccupational sources; include the effects of cumulative exposure to additional substances with similar mechanisms of toxicity; consider the effects of exposure in utero; and address adverse health effects other than cancer, including endocrine disruption. Despite dire predictions that this workload would be infeasible and that the registration process would be paralyzed, by March 1997 EPA had issued approvals for six new active chemical ingredients, 10 new biological pesticides, and one antimicrobial pesticide under the new law. Meanwhile, EPA Administrator Carol Browner appointed Philip Landrigan, who chaired the NRC Pesticides study, as senior adviser to EPA’s child health initiative, which also highlights lead poisoning, asthma, childhood leukemia and brain tumors, and reproductive anomalies.

These steps, when implemented for the huge array of pesticides and pesticide-containing products, should go a long way toward satisfying Wargo’s call for action. Nevertheless, he would surely still be distressed by the continued chemical-by-chemical balancing of agricultural production needs against risk-based health protection in setting residue levels that are tolerated in foods. And from a global perspective, he would criticize the continued excessive use of broad-spectrum pesticides, promotion of disapproved or restricted agents, and lack of adequate protection of workers and young children in many countries. At least the author and readers can now feel some pride that scientific analyses, policy reviews, and political action have indeed generated significant legislation, improved regulatory practices, and offered the promise of better health protection for children in the United States and throughout the world.