The Ascent of Science 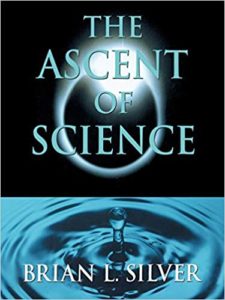 The Ascent of Science is a magisterial, witty, and certainly perceptive guide to how contemporary science came to be. It is an idiosyncratic tour, a reflection of the author’s tastes, enthusiasms, and dislikes: Good theory matters more than experiment because “the Oscar winners in the history of science have almost always been creators of theory.” The great ideas within that enormous enterprise we label “physics” are the most interesting to Brian Silver; and although the obligation to discuss biology (reductionist and organismic) is met, the social, behavioral, and economic sciences are ignored.

The Ascent of Science does not directly address contemporary science policy concerns except for a brief and largely ineffective coda toward the end of the book, in which Silver (a professor of physical chemistry at the Technicon Israel Institute of Technology, who died shortly after he completed the book) sallies, with a style more limpid than most excursions into this territory, into how science can be better understood by the public. The book finishes with an effort to say something about the future, which, although elegantly put, says little, because little of any substance can be said. The publisher probably insisted on it. These niggles aside, the bulk of the book is dazzling. It limns with verve and deep understanding the rise of the great ideas of contemporary science: the emergence of the fundamental structure of the atom, the stunning originality of general relativity, the weirdness and importance of the quantum, the bizarre duality of matter as both wave and particle, the splendid history behind the contemporary ideas about evolution, and more.

In all, it is a dazzling offering, in content, style, humor (how many writers about science quote Madonna: “I’m a material girl in a material world”?), and humaneness. By “humaneness” I mean that Silver addresses his book to what he calls HMS: the “homme moyen sensuel”-the average man (or woman) with feelings. “HMS remembers little or nothing that he learned in school, he is suspicious of jargon, he is more streetwise than the average scientist, he is worried about the future of this planet, he may like a glass of single-malt whiskey to finish off the day.” He is a bit like Steven Weinberg’s smart old lawyer, who serves as the model reader for his The First Three Minutes. HMS, I would venture, is not a bad model for the sort of reader Issues is edited for.

And although Silver offers no policy prescriptions, he has much to say that is useful to those who make science policy. He offers, without pretension or false enthusiasm, insights into the development of contemporary science. He emphasizes that at times quite irrational forces drove great science. Thus, part of Newton’s genius was the ease with which he reconciled his efforts to predict the day the world would end with his laws of planetary movement. “He didn’t believe,” writes Silver, in the style that typifies the book, “that the almighty spent his days and nights chaperoning the universe, a permanent back seat driver for the material world. Once the heavenly bodies had been set in motion, that motion was controlled by laws. And the laws were universal.” And he is contemptuous of scientific “insights” that offer the verisimilitude of science but are not supported by experiment, mathematics, or testable theories. Thus, “to seek inspiration from [Goethe’s] mystical pseudoscience is like taking spiritual sustenance from Shakespeare’s laundry list.” He is angered by ill-based criticisms of science, labeling Jeremy Rifkin’s invention of “material entropy” as “meaningless.”

Criticism of scientists, too

But Silver is a relentlessly honest man, and so he heaps equal dollops of scorn on his colleagues. He is especially and repetitively savage about what he sees as the extravagant claims made for particle physics, arguing that once the proton, neutron, and electron were found and their properties experimentally confirmed, the very expensive searches for ever more exotic particles, such as the Higgs Boson, were increasingly harder to justify other than by their importance to particle physicists. “If we had never discovered the nuclear physicists’ exotic particles, life as we know it on this planet would be essentially the same as today. Most of the particles resemble ecstatic happiness: They are very short-lived and have nothing to do with everyday life.” His assault, repeated several times in the book, goes to sarcasm: “Finding the Higgs Boson will be a magnificent technical and theoretical triumph. Like a great Bobby Fisher game.” Or “if the Higgs Boson represents the mind of God, then I suggest we are in for a pretty dull party.” Of course, this is a tad unfair, even if some of the claims of its practitioners invite such assaults on their field. Although some particle physicists are contemptuous of questions about why taxpayers should support their costly science, there are others who provide thoughtful analyses of how their research benefits the work of scientists in other fields and contributes to national goals.

Silver has other targets in science. He scorns what he calls the “strange articles” on the composition of interstellar dust clouds published about 20 years ago by Fred Hoyle and Chandra Wickramasinghe as resting on “shameless pseudoscience.” He attacks what he believes are exaggerated interpretations of the 1953 experiments by Stanley Miller seeking to validate some ideas about how life on Earth may have originated. Using a broader lens, he is more understanding but still impatient with the conservatism of science, its tendency to refuse credence to new ideas until reason overwhelms. He cites the 19th-century resistance to the notion of the equivalence of heat and work and the conservation of energy, even when giants of the day, such as Hermann von Helmholtz, wrote arguments for these ideas. “You guessed it: rejected.” Helmholtz published using his own money. What sweetens this saltiness is how firmly and fairly he can appraise even those who were wrong but gave it an honest try. He is a great and fervent admirer of Lucretius, even though “almost everything he wrote was wrong.”

Silver is also a refreshing foil to those who would elevate scientists to a priesthood of truth. He mocks the mirage of a science as “an activity carried out by completely unprejudiced searchers-after-knowledge, floating free of established dogma. That is the Saturday Morning Post, white-toothed, smiling face of science.” Indeed, his impatience with science rooted in philosophical systems is palpable. He tells the story of J. J. Thomson in Britain and Walter Kaufmann in Germany, both of whom at about the same time found evidence suggesting the existence of the electron (in fact, Kaufmann’s data were better). But Thomson went on to speculate on the electron’s existence and won a Nobel Prize for it. Kaufmann, a devotee of Ernst Mach’s logical positivist beliefs that only what could be directly verified existed, didn’t speculate. He is a historical footnote. Silver mischievously adds that “If you want to annoy a logical positivist, ask him if the verifiability principle stands up to its own criteria for verifiability.”

Good science policy is critically dependent on the sort of hard-edged and knowing judgments made by Silver. It depends on carving though the competing claims for this or that discipline, this or that discovery, this or that glowing promise. It is enabled by people such as Silver who lived the life, who know how hard good science is, who understand that new work is hardly ever formed out of whole cloth but does in fact rest on “the shoulders of giants,” and who are willing to be brutally honest even if that makes for uncomfortable moments within the community. This book is a reminder of how the policies that will continue the remarkable ascent of science depend on truth-tellers who understand science as well as the need for adamantine adherence to the motto of the Royal Society: “Nullius in Verba,” which Silver translates as “don’t trust anything anyone says.” But enough of messages; The Ascent of Science is a splendid read.