Global Habit: The Drug Problem in a Borderless World

As the 1996 presidential campaign heats up, drug use and control have once again become prominent political issues. Republican presidential candidate Bob Dole has labeled the increased use of marijuana among teenagers, as reported in several recent surveys, a “national disgrace.” In criticizing the White House’s leadership on drug issues, Dole has quipped that instead of adopting the “just say no” position popularized by the Reagan administration, President Clinton has chosen to “just say nothing.” And to demonstrate his commitment to intensifying the war against drugs, Dole has called for the U.S. military to broaden its involvement in interdicting drug shipments, including the use of National Guard units in “rapid response” operations. 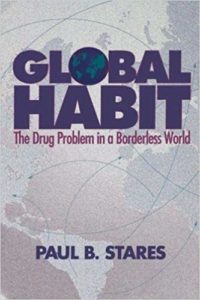 As these figures indicate, no matter who wins in November, prohibition and punishment will continue to be the major focus of the drug war. But is this approach optimal, or even feasible, in today’s increasingly interdependent world? Paul Stares, a senior fellow at the Brookings Institution, makes an impressive effort to redraw the battle lines of the drug war in Global Habit: The Drug War in a Borderless World.[Ed.: Check title; it is The Drug Problem at the beginning of the review.] Stares argues that the prohibitive or negative philosophy on which the United States and most countries of the world have based their drug policies is inappropriate at a time when production, trafficking, and consumption are rapidly increasing worldwide. Instead, Stares proposes emphasizing positive measures. Wisely ignoring the endless and ultimately fruitless debate between supply-reduction and demand-reduction strategies, he would target supply and demand but would emphasize measures that provide positive alternatives to drug use and trafficking. Stares supports his proposal with an expert analysis of the underlying trends and market dynamics that make, and will continue to make, the global drug problem so intractable. When he turns his attention to policy prescriptions, however, he constrains himself by working within the confines of the current debate, and thus his efforts are ultimately disappointing.

A history of failure

Today’s global prohibition regime, based on limiting drug production and trafficking and deterring consumption, has deep roots. In a well-researched if overly long chapter, Stares demonstrates that from the first attempts to control the opium trade at the International Opium Commission in 1909 to recent conventions on money laundering and trade in precursor chemicals, the drug problem has been defined as a law-and-order problem.

But the global prohibition regime, despite its longevity, has not met with many successes. The Organization for Economic Cooperation and Development estimates that consumers in the United States and Europe spend $122 billion per year on heroin, cocaine, and cannabis. Estimates of annual global retail sales range from $180 billion to $500 billion. Fifty to 75 percent of the proceeds of this mammoth “industry” are laundered, resulting in profits larger than the gross national product of three-quarters of the world’s countries.

Stares’s thorough explanation of global drug market trends since the late 1980s shows why there is little reason for optimism that drug flows can be staunched. Although poppy and coca cultivation in the main source areas (the “Golden Triangle” countries of Laos, Thailand, and Burma; the “Golden Crescent” countries of Afghanistan, Pakistan, and Iran; and the Andean countries of Peru, Bolivia, and Colombia) appears to have leveled off, new production sites have sprung up in the countries of the former Soviet Union and Central Asia. Worldwide cannabis production remains undiminished, and the manufacture of illicit synthetic drugs, such as LSD and Ecstasy, is also on the rise.

Despite record seizures by law enforcement authorities, trafficking continues unabated. Higher volume shipments, using large commercial-grade cargo aircraft and containerized ships and cargo trucks, permit the movement of multi-ton shipments and reduce the risk to the trafficker of shipment disruption. Trafficking organizations have also become more sophisticated in their operations, diversifying into other drugs and, in some instances, other premium “goods” such as conventional weapons and endangered animals. [Another significant development, which Stares does not discuss, is the now widespread availability of commercially produced Global Positioning System (GPS) technology. GPS permits extraordinarily accurate targeting, allowing the trafficker to drop drug shipments by air to vessels at sea without the need to use high-frequency transmissions that are subject to interception by law enforcement authorities.]

All of these trends are exacerbated by the major change that is the basis of Stares’s thesis: The drug trade has become a transnational phenomenon. Deregulation of trade and the expansion of tourism and transportation networks have not only made the drug “industry” more efficient in reaching long-standing markets but have also made distribution to former communist and developing countries easier.

Drug consumption presents a murkier picture. Although overall consumption in North America and Western Europe has declined, hard-core use has not, and indeed may be accelerating. At the same time, consumption in central and eastern European countries is on the rise.

Stares’s review of current policies finds that negative measures designed to control production, such as crop-eradication programs, chemical controls, and destruction of processing centers, often face violent resistance and can result in the movement of production to other areas or in substitution of uncontrolled chemicals. Given the increasing opportunities to sell drugs internationally and to launder profits, interdiction opportunities will be increasingly limited. The extraordinary levels of international transactions taking place have greatly reduced the probability that traffickers will be caught. Traffickers themselves are extremely adaptable and can take on new modes of trafficking and new partners easily. Border and customs inspections, the disabling of trafficking networks, and standard law enforcement techniques of surveillance and infiltration will meet limited success. Noting that informal social norms play the greatest role in encouraging or discouraging drug use and that these norms are constantly evolving, Stares believes that negative measures such as increasing penalties for drug use are likely to be off-target and difficult to sustain..

Although he favors positive approaches, he is aware that previous efforts in this direction have not produced glowing results. Crop-substitution programs have usually been disappointing because they have failed to deal adequately with the market barriers of economies of scale, lengthy gestation periods for establishing alternative crops, and limited transportation networks. To demonstrate that crop substitution can work if properly managed, Stares provides a brief but instructive description of a program in Thailand, where local economic development has been linked to an extensive road program. Stares’s ideal positive approach would be much more comprehensive, including infrastructure improvements, easy credit, marketing advice, direct engagement of local and community leaders, and national macroeconomic policies to create market and employment opportunities.

Stares notes that positive measures designed to constrain trafficking face even greater challenges. Offering legal amnesty or clemency to traffickers in return for cooperation with authorities has had minimal effect on trafficking levels. Stares maintains that targeted investment and employment programs to limit the pool of trafficking recruits could be successful provided that they are of sufficient size and desirability.

He is critical of information-only mass media efforts to dissuade drug use and instead favors an integrated educational program that teaches resistance skills and reinforces the antidrug message. He also recognizes the limitations of drug-free zones (which can displace use to other locations) and “harm-reduction” or “harm-minimization” efforts, such as needle-exchange, maintenance, and prescription programs, as well as legal changes that would permit the commercial sale of “soft drugs” (which, in the case of methadone maintenance, is generally accepted as quite successful, but in the case of “prohibition-free” drug-use zones in Europe, is considered only marginally so). In other words, Stares’s commitment to the positive approach does not blind him to the reality that half-hearted or ill-designed positive programs will not work.

Stares concludes his argument for policy reorientation by characterizing the future of the global drug market and its implications for policy. The stresses on the developing countries posed by explosive growth in population, urbanization, lack of economic alternatives, environmental degradation, and the spread of infectious diseases will threaten the legitimacy and integrity of public institutions. The same stresses will result in increased demand for drugs in the developing world, forcing already weakened institutions to address the economic and social costs of growing consumption. Criminal organizations in former communist countries are becoming increasingly involved in drug trafficking, as the newly independent states reel under the bewildering transition to capitalism. Increasing economic and social marginalization of minority and immigrant groups in the United States and Europe will also create conditions conducive to increased drug use.

Given his persuasive characterization of the underlying dynamics of the future global drug market, one would hope that Stares’s policy prescriptions would address some of them. Instead, although recognizing that international drug control should be explicitly integrated into larger policy initiatives, he limits himself to prescriptions that attack the symptoms of proliferation and use, not its root causes. And many of his proposals face formidable barriers to implementation.

Stares’s call for the creation of a global drug-monitoring and evaluation network to collect and analyze data makes sense on the surface, but most of the detailed data on production and trafficking is classified or considered sensitive for law enforcement purposes. A regional center in the United States would not be willing or able to share these data with centers in other areas of the world, as Stares would like. Evaluation of individual nations’ drug policies by the network’s centers would also be a nonstarter. The United States, for one, would be unlikely to subject its programs to international review.

Stares’s proposals for global drug-use prevention and treatment programs are attractive and thoughtful, but prospects for implementation would be constrained by funding (which Stares acknowledges) and an uncertain commitment by some of the necessary implementing authorities, such as Congress (which he does not acknowledge). Stares also argues that drug interdiction efforts should be made part of a broader international effort to bring greater regulation and oversight to global trade-an argument that flies in the face of the still-dominant ideal of free trade on a global scale.

Despite the problems and limitations of his policy prescriptions, Stares has made an important contribution to the drug policy literature. His analysis of the failings of the current prohibition regime and the trends that will reinforce those failings in the future should expose the hollow rhetoric of both sides in the drug war debate.