Consilience: The Unity of Knowledge 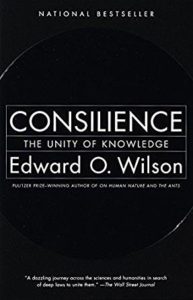 E. O. Wilson is one of the most important intellectuals of our time. He is a scientific leader, well known for his work on ants and his cocreation (with Robert MacArthur) of the theory of island biogeography. Unlike many scientific leaders, Wilson also has vigorously participated in the public forum. In the 1970s, he was vilified as a reactionary or racist because of his championing of human sociobiology. In the 1980s, he emerged as a leading advocate for protecting biodiversity. He has won two Pulitzer Prizes, and his books are in such demand that the initial press run of Consilience is 50,000 copies. Wilson’s voice is one to be reckoned with.

The term “consilience” was coined by the nineteenth-century British philosopher and scientist William Whewell, as part of the phrase “the consilience of inductions.” According to Whewell, the consilience of inductions takes place when an induction obtained from one class of facts coincides with an induction obtained from a different class. This consilience is a test of the truth of the theory in which it occurs. One of his examples of the consilience of inductions was Newton’s use of Kepler’s laws in explaining the central force of the sun and the precession of the equinoxes. Such consilience provides evidence for the truth of the hypothesis on which the prior induction is based. In Whewell’s thought, it had little or nothing to do with the unity of knowledge. Indeed, given his religiosity, conservatism, and opposition to the theory of evolution, it is clear that Whewell would have opposed Wilson’s scientism, which is really the foundation for his belief in the unity of knowledge.

According to Wilson, the ultimate goal of our epistemological activities is a single complete theory of everything, and the foundation of this theory must be the sciences. Although each discipline seeks knowledge according to its own methods, Wilson asserts that “the only way either to establish or refute consilience is by methods developed in the natural sciences.” These methods include “dissect[ing] a phenomenon into its elements” and then reconstituting it according to “how nature assembled it in the first place.” According to Wilson, the end of this process would realize a dream that goes back to Thales of Miletus, the sixth-century B.C. thinker whom Wilson credits with founding the physical sciences.

If one wants to pursue the quest for the unity of knowledge, there are other paths than the one proposed by Wilson. One alternative would view different disciplines as exploring different regions of reality; the unity of knowledge would consist in the conjunction of these disciplinary perspectives. But Wilson’s model of unity is not collaboration across disciplines but a hostile takeover of the humanities and social sciences by the natural sciences. According to Wilson, the social sciences and humanities provide some insights into the domains that they study, but real progress toward the unity of knowledge can be achieved only through the application of scientific methodologies. Indeed, writes Wilson, we should “have the common goal of turning as much philosophy as possible into science.”

Reductionism has been a minority view in philosophy of science for at least the past generation. This is because, handwaving and bald assertion aside, there have been few successful attempts at carrying out the hypothesized reductions. In the wake of these failures, reductionism has increasingly been rejected in favor of eliminativism or pluralism.

Eliminativists respond to the failure of reductionism by saying so much the worse for macrolevel concepts. If they cannot be reduced to microlevel concepts, then the true theory of everything will simply dispense with them. To put the point bluntly, eliminativism holds that progress in the microlevel understanding of nature does not explain the central concepts of fields such as psychology and religion; rather, it explains them away.

Pluralists claim that reductionists fail to recognize the diversity of questions that we ask of nature and the multiplicity of interests that we have in representing the world. The fact that sociological concepts do not figure in quantum mechanical explanations does not show that they are fictional any more than the fact that physics doesn’t help explain the murder rate in Boston shows that there is no such thing as electrons. If we want to know how to reduce poaching in a game reserve (for example), the concepts of economics and sociology are probably the right ones to employ. If we are concerned about the genetic resilience of animals in the reserve, then the language of molecular biology will be central. Although the concepts of physics may not figure centrally in either investigation, they would certainly apply if our goal were to understand the structure of this region of space-time.

Like many scientists, Wilson embraces reductionism because he seems to think that it is the only alternative to spooky metaphysics. If we reject reductionism, he seems to think, then we must believe that minds float free of brains or that moral values exist independently of valuers. But both eliminativism and pluralism are consistent with the general view that if there were no physical properties or entities, then there would be nothing to which the concepts of art or psychology could refer. Indeed, both eliminativism and pluralism are consistent with the view that as science develops and changes, various questions and claims may cease to have import. We no longer wonder with Descartes where exactly is the seat of the soul, not because we now know, but because our contemporary scientific view conceives the whole question of the relation between mind and body in a very different way.

Wilson is not just a naturalist but also a moralist. He declares that “ethics is everything” and implores us to protect biological diversity and to “expand resources and improve the quality of life.” But what grounds these noble sentiments? Wilson’s chapter on ethics and religion is the weakest in the book. He argues against the existence of God and transcendent values but says little about how morality can have traction in a world of fact. Wilson seems genuinely ambivalent about whether science can provide the ground for values. Early in the book he writes that “science is neither a philosophy nor a belief system,” but later he tells us that “science has always defeated religious dogma point by point when the two have conflicted.” It is hard to see how science could face off against religious dogma “point by point” unless it too was a philosophy or belief system. Some, in the spirit of naturalism, have attempted to reduce moral values to concepts such as biological fitness. But not only are such reductions implausible, they are seriously at odds with Wilson’s own values. Thus, this approach to reconciling science and morality should not be attractive to Wilson.

There are many obstacles to Wilson’s program of unifying knowledge. The greatest involves finding a place for the normative in the theory of everything. Much of what goes on in moral philosophy, literature, the arts, and the human sciences-disciplines that Wilson would like to dispense with in their present form-is directed toward telling us how to live rather than how the world is. As long as we remain creatures who act as well as think and who moralize as well as conceptualize, it is hard to see how our system of knowledge can be unified in the way that Wilson wishes.

Wilson is an important thinker, but he has given us a shallow book. What we have in the end is more cheerleading for science and yet more speculations about its future. Those of us who admire his courage and accomplishments, and generally endorse his outlook, cannot help but be disappointed.