How to Bring Global R&D into Latin America: Lessons from Chile

Over the past several decades, a growing number of multinational companies have established research and development (R&D) facilities outside of their home countries. More recently, some universities and public research organizations have followed suit, including American universities such as Stanford, MIT, and Georgia Tech. From the perspective of host countries, attracting global R&D can facilitate the absorption of foreign knowledge and strengthen national technological capabilities, thereby helping to close technology gaps.

But emerging countries—with a few notable exceptions, such as China—have been largely left out of this picture. For the most part, these countries lack the large and dynamic markets, the scientific infrastructure, the human capital, and the specialized industrial clusters that typically attract foreign investments in R&D. Latin American countries, in particular, have been struggling with attracting foreign R&D. This is reflected in a recent report of the United Nations Economic Commission for Latin America and the Caribbean, which found that in 2013 the region attracted only 3 percent of global R&D foreign direct investment projects, whereas China attracted 34 percent.

Some countries in the region, however, are now trying to turn this around. We offer Chile as a case in point. Chile is making the attraction of foreign R&D a more explicit priority—part of a broader strategy to strengthen the internationalization of its national innovation system. Most critically, efforts include new policy programs that offer incentives to compensate for other location disadvantages.

The story begins in 2008, when a government economic development agency called Corfo, working through its InnovaChile Committee, launched the International Centers of Excellence (ICE) program. It is one of the few programs in the world—and the first of its kind in Latin America—explicitly aimed at creating R&D centers where foreign universities, public research organizations, and private corporations will carry out R&D, technology transfer, and commercialization activities. The centers, known as ICEs, are selected based on their potential to boost the competitiveness of Chilean industry. To help reach this goal, the ICEs are required to hire a significant number of local scientists, establish collaboration agreements with domestic universities, and contract with local companies to conduct research.

The ICE program’s annual budget is currently around $30 million (in U.S. dollars), which makes it the largest of Corfo’s programs designed to promote innovation in Chile. Rather than distributing this budget among a large number of projects, the program selects a limited number of R&D centers and provides them with substantial funding to help them reach critical mass relatively fast. Chilean embassies promoted the program through direct contacts with leading universities and research institutes around the world. Centers were selected through a competitive process. Corfo invited proposals and then evaluated them with the support of an international panel of experts.

The program’s first call for proposals, in 2009, focused on attracting foreign universities and public research organizations. Its second call, in 2012, expanded to include multinational companies. Four ICEs were developed from the first call, each of them receiving a grant of up to $19.5 million for a 10-year period. The recipients were expected to contribute to their respective center’s funding with the equivalent of at least 59.5 percent of the grant. In the second call, the maximum grant for universities and research organizations was reduced to $12.8 million per center over eight years, while the minimum co-financing increased to 87.5 percent of the grant. Grants made to companies were limited to $8 million over 4 years, with each recipient being required to contribute at least twice the amount of the grant.

A total of 12 R&D centers have been established so far through the ICE program, comprising eight research organizations and four multinational corporations from seven different countries (Table 1). The roster includes one university and two corporations from the United States. The University of California, Davis, opened a center—its first R&D center outside the United States—to focus on agricultural technology, including plant breeding, postharvest technologies, and technologies geared to adapt to global climate change. The pharmaceutical giant Pfizer established a center—its first R&D center in Latin America—to focus on developing new genome-based diagnosis technologies for cancer. And Emerson, a manufacturing and technology company, opened a center to focus on developing new technology to improve the productivity and efficiency of mining operations. 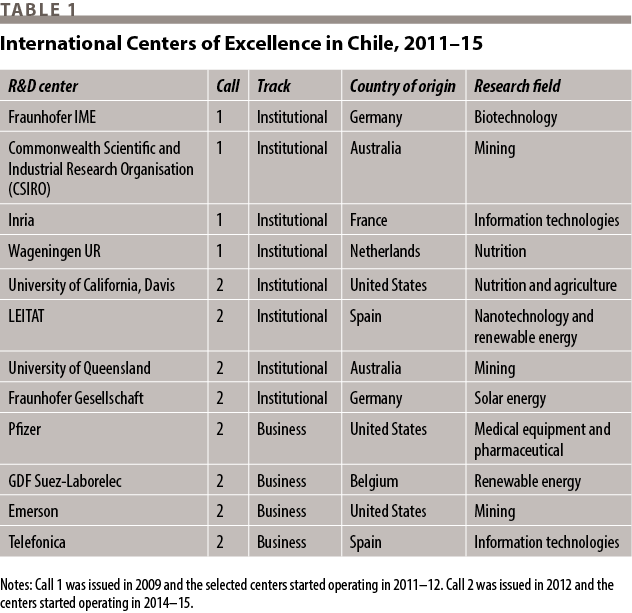 The ICEs vary in size, from over 120 researchers in the one run by the German research organization Fraunhofer to around 25 in the one run by Wageningen UR of the Netherlands. All are clearly aligned with the needs of Chilean industry, but some focus on specific sectors (such as mining, nutrition, or renewable energy), whereas others embrace platform technologies with applications across several industries (such as information technology, biotechnology, or nanotechnology). The four ICEs established through the first call are still in their early years of operation, but they have already obtained visible results. For example, during its first three years of operation, the Fraunhofer center has won one patent and has 10 additional patent applications pending, has spun off one independent company, has started 33 projects with various domestic industries, and has published 16 scientific papers in journals listed in the Thomson Reuters citation index. The eight ICEs selected through the second call have only very recently begun operations in the country or are in the process of doing so.

As part of its efforts to ensure that the ICE program is meeting its goals, Corfo commissioned an interim evaluation to one of us (Guimon) in 2014. Building on interviews with 10 key stakeholders—including the directors of the centers, representatives of Corfo, and government policy makers—the evaluation revealed a number of concerns and challenges.

Throughout its history, critics of the ICE program argue that the funding provided to foreign groups should be used instead to strengthen universities and R&D institutes within Chile that are in great need of additional investments to build critical mass. Another frequently mentioned concern is that the program might lead to a sort of “techno-colonialism,” whereby foreign centers focus on commercializing in Chile technologies they had already developed in their home countries, while paying less attention to local technology priorities and needs. Indeed, some previous studies have found that the R&D of multinational companies in emerging countries normally entails “familiar science” (that is, applications currently used by the firm or its competitors) rather than “new science.”

Despite such global-local frictions, since 2008 the ICE program has survived two changes of government, which usually come with substantial shifts in policy strategies. Long-term commitment to the ICE program beyond the political cycle is critical given that its full returns can accrue only over an extended period of time. This makes evaluation efforts important, especially regarding whether or not the grant funds might be better dedicated to R&D centers of Chilean ownership. The answer here will turn on the capacity of the ICEs to develop new solutions for Chilean industry and to instigate a systemic change in the national innovation system, thereby improving university-industry collaboration and enhancing the commercialization capacity of the national science base, while forging closer linkages with foreign sources of knowledge. Forthcoming evaluations will require a complex and flexible model, balancing quantitative metrics and qualitative assessments, accommodating differences between scientific fields, and ensuring high levels of transparency.

To overcome frictions and barriers to cooperation in the near future, we believe Corfo should adopt a more assertive approach, acting as a cross-border broker between the ICEs and Chilean research centers and firms. Corfo should also seek to foster closer cooperation among the ICEs themselves, to share good-practices and identify possible areas for scientific collaboration, while coordinating research agendas to exploit synergies and avoid duplications. Furthermore, Corfo will need to decide whether it will issue new calls for proposals for this program in the next few years or concentrate resources in existing ICEs and perhaps provide the best of them with additional funding. Another controversial decision that needs to be addressed shortly is whether to penalize the worst-performing centers—those found in the interim evaluation not to be meeting their original commitments—by curtailing their level of public funding.

Looking further into the future, the key challenge will be to ensure that the ICEs remain active and expand beyond the 10 years of public support envisioned under the first call of the program. The sustainability of the ICEs depends on their capacity to earn income from contract research, patent licensing, and other sources of competitive public funding, in addition to core funding. Based on the standards of international best practice, we believe the ICEs should evolve toward a funding model of around one-third income from industry, one-third from competitive public funding, and one-third from core public funding. Core funding may come from the Chilean government as well as from the countries in which the ICE grant recipients are based.

Therefore, it will be important for the program to demonstrate not only that the centers are having an impact locally, but that they are providing benefits for the home country that could justify future funding. Such benefits may be assessed in terms of new opportunities for firms from those countries to expand into Chile using the centers as local intermediaries, new technology generated in Chile that can be used at home or exported to other countries, and new opportunities for international scientific collaboration, among other possibilities. Moreover, for research institutions interested in becoming global players, some of the ICE managers indicated that the program might well provide an opportunity for experimenting with the internationalization challenges in a small and safe country such as Chile.

But the primary goal of the ICE program is to enhance Chile’s scientific and technological capabilities. In 2014, the Chilean government launched the Growth, Innovation, and Productive Agenda, a new economic strategy with a focus on diversifying the country’s economy, with emphasis on adding more technology-intensive industries, while improving the operations of existing industries so that they can provide new products and services of higher added value. The ICEs are expected to play a strong role in this strategy by bringing new capacities and technologies from their countries of origin to existing industries, as well as leveraging the emergence of new sectors driven by technology.

Chile’s experience with the ICE program can be a learning model for other emerging countries in Latin America and beyond that want to attract global R&D. In fact, it has already served as inspiration for Peru, which launched a similar initiative in 2014 called the Formula C Program. However, we stress that for such programs to succeed, they must be grounded in a dynamic ecosystem where local researchers, universities, firms, and entrepreneurs are prepared to absorb and capitalize on the expected spillovers derived from the attraction of global R&D.

The ICE program is a good example of emerging modes of North-South research collaboration to build the kind of research and innovation capacities that can help emerging countries catch up economically and close development gaps. The program represents a shift from the traditional “one-way” knowledge transfer mentality that has so often marked international scientific cooperation for development, toward a deeper collaboration and coproduction of knowledge among equal partners with mutual benefits.