Less than two weeks after Congress finally completed its work on the fiscal year (FY) 2004 budget, President Bush on February 2 released his FY 2005 budget proposal. The president would increase total federal R&D spending to $132 billion–$5.5 billion or 4.3 percent more than FY 2004–but, in a repeat of the past couple of years, most of the increase would go for R&D spending in the Department of Defense (DOD) and the Department of Homeland Security (DHS) (see table).

Funding for all other R&D agencies would continue to stagnate or decline, with increases in some agencies offset by steep cuts in others. Even two favored nondefense R&D agencies would have to adjust to diminished expectations. The National Institutes of Health (NIH) budget, which was recently doubled over a five-year period, would rise only 2.6 percent. The National Science Foundation (NSF) budget would increase 3.6 percent, but that would leave the agency well short of the money promised when a law to double its budget over five years was enacted in 2002.

Defense R&D, which includes DOD, the Department of Energy’s (DOE’s) defense activities, and defense-related activities in DHS would total $74.7 billion, or 57 percent of the total federal R&D portfolio. Just a few years ago, defense and nondefense spending were roughly equal. Federal homeland security R&D spending, which cuts across a dozen federal agencies, would total $4.2 billion in FY 2005, a 15.9 percent or $575 million increase.

DOD’s R&D budget would grow to $69.9 billion, an increase of $4 billion or 6 percent. The big winner, again, would be the Missile Defense Agency with a 20 percent increase to $9.1 billion, in preparation for deployment of a missile defense system beginning in 2004. By contrast, once again the Pentagon proposes to cut basic and applied research funding. Basic research would fall 5.3 percent to $1.3 billion and applied research would decline 12.3 percent to $3.9 billion. DOD’s Science and Technology account would fall an even steeper 15.5 percent to $10.6 billion. The budget for the Defense Advanced Research Projects Agency, however, would increase to $3.1 billion, up 9.1 percent.

NIH R&D would rise to $27.9 billion in FY 2005, with most institutes receiving increases between 2.8 and 3.3 percent. There would be no clear favorites, unlike the past two years when biodefense research was heavily favored. The largest percentage increase, 10 percent, would go to the Office of the Director because of $60 million in new money for the NIH Roadmap for Biomedical Research, NIH Director Elias Zerhouni’s initiative to reinvigorate NIH’s clinical research, interdisciplinary research, and new research tools.

NIH again proposes to discontinue an extramural construction program in the National Center for Research Resources (NCRR), leaving NCRR the only NIH institute to see its budget decline (down 7.2 percent to $1.1 billion). The total number of research project grants would increase by 1.4 percent, and the number of new grants would rise slightly but only to the FY 2003 level after falling in 2004. The average grant size would rise 1.3 percent, well below the 3.5 percent expected inflation rate for biomedical research. The size of the average new grant would actually fall in 2005, and the proposal success rate would fall to 27 percent, down from 30 percent last year.

NSF R&D would increase to $4.2 billion. The Major Research Equipment and Facilities Construction account would enjoy a sizeable increase, from $155 million to $213 million because of three new starts. The small increases for the research directorates would squeeze NSF funding of competitively awarded research grants. The total number of NSF research grants would fall to 1,645 in FY 2005, and NSF expects to make awards to fewer than one in four applicants this year and next year, making the competition fiercer.

Despite the president’s recently announced plans to return humans to the moon and subsequently go to Mars, most of the National Aeronautics and Space Administration’s (NASA’s) FY 2005 budget would go to near-term projects. The NASA budget would increase by 5.6 percent to $16.2 billion, but nearly all of the increase would go to returning the non-R&D Space Shuttle to flight (up 9.5 percent to $4.3 billion) and resuming construction of the Space Station (up 24.3 percent to $1.9 billion). NASA R&D would increase by 3.9 percent to $11.3 billion, but basic and applied research funding would actually decline (down 3.3 percent). In Space Science (up 4.2 percent to $4.1 billion), there would be large increases for Mars Exploration (up 16.1 percent to $691 million) to build the next generation of robotic explorers as well as a new Lunar Exploration account of $70 million to begin preparations for the return to the moon. Other NASA research efforts would decline steeply, including investments in earth science, aeronautics research, and physical sciences research. In technology development for the moon and Mars missions, NASA would close out the Space Launch Initiative and its projects such as the Orbital Space Plane and begin work on developing a Crew Exploration Vehicle.

R&D funding in the Department of Energy (DOE) would increase 1.3 percent to $8.9 billion. The entire increase and more would go to the Radioactive Waste Management program for a tripling of R&D activities in support of the Yucca Mountain nuclear waste disposal site. The $275 million R&D investment (up from $69 million) would depend on congressional approval of a new source of dedicated revenues. On the nondefense side, funding for most other DOE R&D programs would fall. R&D funding for the Office of Science (OS) would decline by 0.4 percent to $3.2 billion, marked by flat funding for core R&D programs and the proposed elimination of FY 2004 R&D earmarks. The few increases within the OS portfolio would be focused on nanoscale science and hydrogen research. Within Fusion Energy Sciences, funding for the International Thermonuclear Experimental Reactor (ITER) project would ramp up, requiring offsetting cuts in domestic fusion research. Overall funding for energy R&D (excluding the Yucca Mountain project) would decline steeply in FY 2005. Proposed increases for hydrogen R&D ($228 million, up from $159 million) would be offset once again with steep cuts in other renewable energy research. Increases for coal R&D would be offset with steep cuts in other fossil fuels R&D, and increases in fuel cell technologies would be offset with cuts in energy conservation R&D. DOE’s defense R&D programs would increase 2.1 percent to $4.3 billion, including increases for advanced scientific computing (up 6.6 percent) and a quadrupling of research efforts on the controversial Robust Nuclear Earth Penetrator ($28 million, up from $7 million).

The DHS R&D portfolio would increase 15.5 percent to $1.2 billion. DHS research would nearly triple from $171 million to $431 million as DHS begins to focus on developing a long-term knowledge base instead of immediate technology needs. The majority of DHS R&D would continue to be in the new Directorate of Science and Technology with an R&D budget of $987 million in FY 2005. In addition, DHS has $885 million in FY 2004 and $2.8 billion in FY 2005 in already appropriated funds for the non-R&D Project Bioshield, which is designed to develop biodefense countermeasures. The FY 2005 DHS R&D portfolio would also be heavily oriented toward biodefense. The proposed $407 million in spending would make it the largest program area in the portfolio.

R&D in the U.S. Department of Agriculture (USDA) would fall $76 million or 3.4 percent to $2.2 billion. USDA proposes to eliminate $220 million in FY 2004 R&D earmarks and to hold other funding flat overall. Research funding would take a big hit, however, in order to provide $178 million to complete animal research and diagnostic facilities at the National Centers for Animal Health in Ames, Iowa, which would be the heart of a USDA-wide food and biosafety initiative. There would also be $37 million in new intramural research on food and agriculture defense. Extramural research funding would fall sharply, mostly because of the proposed elimination of earmarks, but funding for the competitively awarded National Research Initiative grants would climb 10 percent to $180 million.

Once again, the administration proposes to eliminate the Advanced Technology Program at the Department of Commerce, which was funded at $171 million in FY 2004. The savings would allow for a 30 percent boost for intramural research at the National Institute of Standards and Technology (NIST) laboratories. The budget would also keep funding for the non-R&D Manufacturing Extension Partnership at NIST at $39 million, well below the $106 million level of last year and previous years. National Oceanic and Atmospheric Administration (NOAA) R&D would decline by 3.3 percent to $611 million. The Oceanic and Atmospheric Research (OAR) account in NOAA would fall 11 percent in FY 2005 because of proposed elimination of earmarks and reductions in core OAR programs.

R&D in the Department of the Interior would fall 4 percent to $648 million, with a similar cut to $525 million in Interior’s lead science agency, the U.S. Geological Survey (USGS). There would be cuts to nearly every USGS program.

The Environmental Protection Agency (EPA) R&D budget would fall 7.1 percent or $44 million to $572 million. Although some of the cuts would be due to the proposed elimination of R&D earmarks, funding for many R&D programs would also decline. The extramural Science to Achieve Results ★ program would see its budget fall to $65 million, a steep drop from the $100-million annual funding levels of the past several years. EPA would eliminate STAR grants entirely in four research areas. EPA’s overall budget would fall 6.9 percent to $7.8 billion, with particularly steep cuts to state and tribal assistance grants and the Science and Technology program.

Work on the FY 2004 budget was finally completed on January 23 when President Bush signed an omnibus appropriations bill that provided funding for eight of the 12 largest R&D funding agencies. (The omnibus bill also included a 0.59 percent across-the-board cut for all non-DOD appropriations, even for agencies whose budgets had already been signed into law.) Overall for FY 2004, the federal investment in R&D will increase to $127 billion, up $8.4 billion or 7.1 percent, and $4.6 billion more than the Bush administration requested.

Although the FY 2004 budget includes record increases for defense and international discretionary spending related to U.S. activities in Iraq and Afghanistan, domestic R&D spending increases were severely restrained. Increases in some R&D funding agencies were offset by flat funding or cuts in others.

After declining in FY 2003, earmarks made a dramatic return, rising 32 percent to $1.9 billion. Nearly all of the increase stems from a near doubling, to $825 million, of earmarks in the DOD budget. Earmarks in DOE R&D would also double to $284 million. USDA would receive $220 million in earmarked money and NASA would receive $194 million.

The pressure on individual members of Congress to push for earmarks will be intense during the FY 2005 budget process, particularly because the president has proposed holding domestic discretionary spending to just a 0.5 percent increase while continuing to invest heavily in defense and homeland security programs. Thus, the budgets of many domestic agencies would be cut. In such an environment, providing additional funds for nondefense R&D projects would involve taking money from other areas that are already proposed for cuts. For these reasons, House Budget Committee Chairman Jim Nussle (R-Iowa) has threatened to push for legislative language in all appropriations bill calling for a one-year moratorium on all earmarks. 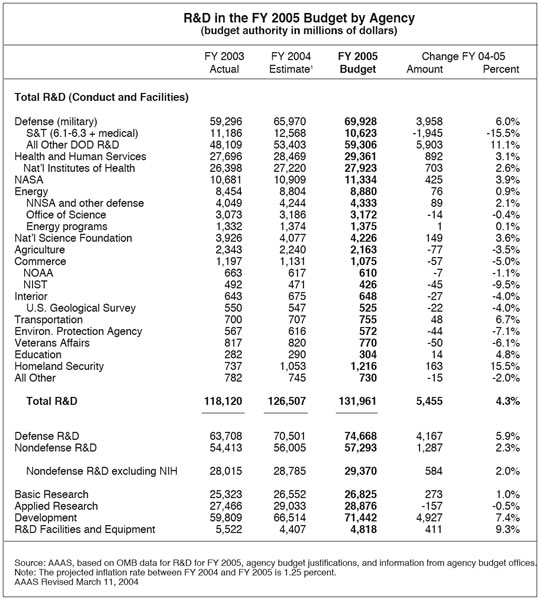 “From the Hill” is prepared by the Center for Science, Technology, and Congress at the American Association for the Advancement of Science (www.aaas.org/spp) in Washington, D.C., and is based on articles from the center’s bulletin Science & Technology in Congress.