By Eric A. Feldman

Impure Science: AIDS, Activism, and the Politics of Knowledge 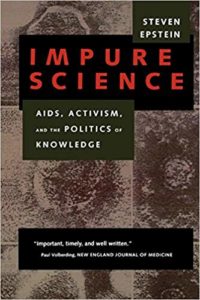 In the short span of years since the first cases were reported in 1981, AIDS has reconfigured the U.S. landscape. Change is evident in the power of new social movements; in the perception of the appropriate balance between individual rights and public health; in the collection and distribution of blood and blood products; and in the delivery of health care services. All of these changes revolve around two fundamental and complex questions: What causes AIDS and how can the disease be treated?

In Impure Science: AIDS, Activism, and the Politics of Knowledge, Steven Epstein focuses on how individuals and points of view enter the orbit of scientific discourse and attain credibility among those with the power and prestige to influence the ways in which questions of scientific causality and treatment are answered. In the process, Epstein, an assistant professor of sociology at the University of California, San Diego, explains technical scientific issues in a way that nonscientists will appreciate, marshals contemporary social theory without driving away those who shudder at the mention of Foucault, and details bureaucratic and political struggles without drowning the reader in acronyms or excessive detail.

Questions about the etiology of AIDS and the efficacy of AIDS treatments may appear to be amenable to technical answers rooted in agreed-on scientific criteria. Don’t be fooled, Epstein tells us. “The extent to which closure [on such questions] is achieved . . .” he writes, “depends crucially on the capacity of actors to present themselves as credible representatives or interpreters of scientific experiments-to ensure that others trust their evaluations and will fall in line behind them.” The routes to credibility are varied; they include not only educational credentials but the ability to speak the language of biomedical science and to exploit divisions within the biomedical establishment. By taking these paths, certain individuals and groups, particularly AIDS activists, were able to bolster their influence in the scientific debates.

The bulk of the book centers on two narratives involving battles over credibility and knowledge. The tales are well known, but Epstein brings fresh insight to both of them. The first, which he titles “The Politics of Causation,” begins in June 1981 with the Center for Disease Control and Prevention’s (CDC’s) report that five “active homosexuals” in the Los Angeles area had been treated for Pneumocystis carinii pneumonia. Epstein describes the steady accumulation of cases that soon were grouped under the name AIDS, the conflicting hypotheses about its cause, the developing consensus that the HIV virus causes AIDS, and the subsequent questioning of that claim.

Much of this account focuses on Nobel laureate Peter Duesberg, the University of California at Berkeley biochemist who led the charge against the view that HIV causes AIDS. Duesberg should be pleased with his portrayal in Impure Science; instead of being seen, as in other accounts, as a right-wing ideologue using his reputation to draw attention to uninformed views, Deusberg is portrayed by Epstein as engaged in a political battle in which both sides have equally valid but incompatible views about scientific causation. Although Epstein clearly believes that HIV causes AIDS, he manages to stay above the fray to make a larger point. By carefully exploring why mainstream scientists circled the wagons around the HIV-causes-AIDS hypothesis as well as how they grappled with dissenters, Epstein highlights the importance of power and ideology in “pure” science.

The second half of the book, devoted to what Epstein calls “The Politics of Treatment,” begins in 1984, with the hunt for a treatment against what was believed to be an infectious agent. For 150 pages, Epstein recounts in fascinating (and occasionally overwhelming) detail the many clashes between the Food and Drug Administration (FDA), the National Institutes of Health, and AIDS activists. Epstein’s account centers on azidothymidine (AZT), which in September 1986 was declared by a top U.S. health official as holding “great promise for prolonging life for certain patients with AIDS.” The development and use of AZT, approved by the FDA in early 1987, helped ignite conflicts over the drug trial and approval process in the United States that have fundamentally transformed how the FDA operates.

As Epstein notes, randomized clinical trials, which were virtually unknown before World War II, had rapidly become established as the gold standard in biomedicine. “Studies that proceed through the right steps-beginning with the random assignment of patients to either the treatment or the control arm-are presumed to generate true knowledge, while those with procedural failings are not.” Activists-Epstein focuses primarily on gay activists-questioned this tidy equation, challenging the medical establishment with a series of questions: Why were some groups of potential research subjects excluded from trials? On what basis were subjects told that they could not be taking concomitant medications? Is there a compelling reason to prevent subjects from being enrolled in multiple trials? These challenges, presented insistently, articulately, and publicly, have helped to reshape the design and methodology of clinical trials of AIDS drugs. In doing so, activists have influenced not only the world inhabited by biomedical scientists but also the ethical and legal scaffolding surrounding that world.

Underlying the narrative about conflicts over treatment is the same theme that Epstein introduced in his discussion of causality. There is no definitive clinical trial that can establish the efficacy of a drug, just as there is no definitive epidemiological study that can firmly establish whether HIV causes AIDS. Instead, the extent to which a clinical trial is accepted as definitive depends on how successful those who perform or interpret scientific experiments are at convincing others that they are worthy of trust. The success one has in accumulating support and overcoming resistance will be profoundly affected by one’s credibility, which brings us to the notion of “impure science” described by the book’s title.

Metaphors of purity and impurity, innocence and guilt, cleanliness and filth, are familiar themes in the language and literature of AIDS. Here, Epstein hijacks the metaphor and applies it not to people with AIDS, who have been too frequently and inappropriately classified on a moral template, but rather to the science of AIDS. Pure, clean science, he argues, is merely “an ideology designed to promote the kind of science [mainstream researchers] happened to do . . ., legitimating metaphors that imbued modern scientific institutions with an appearance of the sacred.” It is a powerful metaphor, and one cannot help feeling disappointed that Epstein fails to connect his discussion of impure science to an analysis of the activists themselves and how their actions and perceptions are colored by the idea that they are themselves impure.

I have some other quibbles with the book, some of which Epstein acknowledges. To some extent, the book itself is organized like a double-blind trial, with the stories of causation and treatment existing on parallel tracks. Without information about the debates regarding AIDS treatment, however, the reader lacks a critical source of information needed to understand claims made about HIV as the etiology of AIDS. More cross-pollination between the two stories would have been helpful. In addition, the book talks about an “AIDS movement,” “AIDS activists,” and “mainstream science” as if these were unified groups. The narratives themselves focus on gay activists from particular organizations and a small set of influential scientists, which makes clear that certain sections of the book are overly generalized. Almost no attention is devoted to issues of AIDS causality and treatment outside the United States, despite the globalization of the pharmaceutical industry, the internationalization of clinical trials, and the prominence of an international scientific mainstream at such organizations as the World Health Organization’s Global Program on AIDS (now UNAIDS).

Finally, at times Epstein’s desire to be fair to all competing scientific views can distort his evaluation of the messengers of those views. For example, he mentions that one of the inner circle promoting Duesberg’s ideas is University of California at Berkeley law professor Philip Johnson. But Epstein fails to say that Johnson is a prominent conservative who was instrumental in the successful attack against former California Supreme Court Chief Justice Rose Bird and other members of the court, and has no expertise in legal issues relevant to AIDS, the FDA, or medicine. Such facts are important in sorting out the political agendas of those making scientific claims.

But none of these shortcomings detracts from the power and importance of this excellent book. It will inform and provoke social scientists interested in the sociology of knowledge and the sociology of science, biomedical scientists, activists, and policy analysts. Perhaps the most telling disappointment is that the book ends too soon. What would Epstein say about recent studies of protease inhibitors? How would he analyze the optimism of mainstream science at last summer’s 11th International Conference on AIDS in Vancouver? We can only hope that Epstein turns his gaze on such questions in his continuing work.