The Economic Implications of Social Cohesion 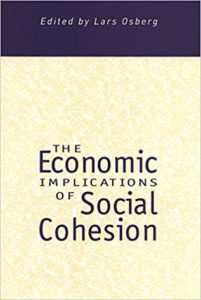 Any country that is doing nation-building full time needs to be concerned about social cohesion: the elusive glue of civility, trust, and cooperation that is essential to a society’s health. Why do some nations thrive and others stall? What are the signs of social corrosion? How do failed states regenerate? And how do developed countries maintain cohesion as immigration increases, populations diversify, and politics polarize? These questions have received extensive attention recently as a result of Harvard public policy professor Robert Putnam’s influential essay Bowling Alone, which pointed to the decline in popularity of bowling leagues as indicative of the deterioration of communal activity in the United States.

George Mason University political scientist Francis Fukuyama’s research on trust extended these questions to economic outcomes in a number of countries. Fukuyama argues that social cohesion, as measured by the amount of trust people have in one another, is inextricably related to economic performance. He makes his case not with economic data but with historical case studies of low- and high-trust societies. He suggests that trust affects the ability of people and firms to organize efficiently and therefore their ability to prosper.

The essays in The Economic Implications of Social Cohesion test Fukuyama’s hypothesis for two high-trust countries, Canada and the United States. Using detailed economic data for both countries, this book asks whether regions in North America with higher levels of trust really are better off. Do they grow faster than the regions with less trust? Do people migrate from the regions with lower social cohesion to the regions with higher cohesion? At a micro level, does social cohesion in childhood produce better test scores in high school and affect economic well-being when the child is an adult?

Little quantitative work has been done on these questions, in part because of measurement issues. Social cohesion is an amorphous concept that is hard to measure; the economy is a kaleidoscope that is easy to mismeasure. But even if the concepts could be precisely measured, causality would be difficult to determine when there are so many intervening variables. Cross-sectional or cross-national comparisons can lead only to conclusions about correlations; conclusions about causality require highly refined longitudinal data and analyses that are not yet available in this field. Fortunately, the authors in this book are more intrepid in the face of these problems than are many of their peers. And they are more introspective about their conclusions.

The editor of this book, Lars Osberg, is a well-known Canadian economist who has spent much of his professional life worrying about the implications and mismeasurement of poverty. For this book, he has assembled a group of academics with different expertise on issues of social cohesion and economic growth. The Canadian focus of some of the chapters is combined with more general conclusions that are directly applicable to other developed countries and indirectly to developing countries.

“Trust in people ” is the most pervasive indicator used in this book as an indicator of social cohesion. Information about this indicator has been collected from a number of countries over time in the international social science survey, World Values Survey. However, the survey results are not always consistent with national surveys asking similar questions. Therefore, although the survey may be useful for comparing countries at one point in time, it may be less reliable in describing trends over time. No single indicator is likely to capture the complexity of social cohesion, however. Other indicators that are used include membership in organizations, participation in voluntary activities, and residential mobility.

John Helliwell, a prolific researcher on social capital, analyzes detailed comparisons of economic growth and social cohesion in Canadian provinces and the U.S. states. He finds, as others have, that people who are members of groups are more inclined to say that they trust people. This is regardless of the fact that in the United States, memberships tend to be more in religious organizations, whereas in Canada, memberships tend to be more in labor unions.

Levels of trust vary widely within both the United States and Canada. Trust is higher in the western and north central United States and in western Canada than in other regions. In both countries, regions with the highest levels of trust are economically more prosperous than other regions. They are also the destination of internal migration. However, per-capita economic growth has been the strongest in the poorest regions within each country, which is not surprising, because the economic health of regions within a country tends to converge over time. This illustrates the problem of finding the signal effect of social cohesion among more powerful macroeconomic forces.

At a more personal level, Shelley Phipps and Jane Friesen correlate indicators of social cohesion with the school performance of high-school children and their economic well-being as adults. These analyses suggest some intuitive relationships. The amount of social cohesion in a child’s life is positively correlated with how well they do on English exams in grade 12. And adults who describe a childhood with more social cohesion were more likely to be economically better off than those with a childhood with less cohesion. A chapter on health also suggests that high levels of trust in others are correlated with good adult health in at least seven countries, including Canada and the United States. This finding is consistent with a growing body of research on the social and psychological correlates of good health. At the same time, one local indicator of social cohesion–the number of memberships in organizations–was uncorrelated with health status.

Greater income inequality is associated with lower levels of social cohesion as measured by voluntary activity. But voluntary activity is an incomplete measure of social cohesion. People, such as immigrants, with large extended families often provide a lot of voluntary care to relatives, which is not counted as voluntary work in surveys. Also, a high level of volunteer work in a closed or rigid community can encourage social exclusion instead of social inclusion. The surveys of volunteerism cannot distinguish between these different outcomes.

Social cohesion and voluntary activities were also correlated with Protestantism in Canada. This is consistent with the arguments Max Weber made more than half a century ago. In The Protestant Ethic and the Spirit of Capitalism, Weber observed that Protestant sects seemed to create stronger community ties than did official or national religions. Seymour Martin Lipset, in examining Canada and the United States a decade ago, also noted that the sectarian nature of Protestantism made it more communal than Catholicism in both countries.

The chapter on volunteerism relied heavily on the Canadian National Survey of Giving, Volunteering and Participating. The 2000 edition of the survey, which was published too late to be used in this analysis, suggests that charitable contributions are increasing in Canada but that volunteering hours are declining because of strong recent economic growth. That suggests that the relationship of the economy and social cohesion, as measured by volunteerism, is more complicated than the authors had hoped.

The book has some important gaps. Perhaps the most important question left unaddressed is how large immigrant populations affect a country’s social cohesion. Eighteen percent of the Canadian population is foreign-born, as is 11 percent of the U.S. population. This book mentions that ethnic groups in both Canada and the United States have lower levels of trust than people who do not define themselves as ethnic, and that neighborhoods with large immigrant populations tend to have less social cohesion. But these observations are left hanging without more discussion or data.

Canada and the United States are facing the challenge of large immigrant populations differently. The United States still believes in its melting pot metaphor for the integration of new immigrant populations; Canada explicitly embraces a multi-pot approach that requires no melting. Canada offers free language classes to all immigrants and citizenship within three years. In the United States, the average time for naturalization is about 10 years. Which approach is more socially cohesive? Does it make a difference in the economic productivity of the new immigrants? The differences in immigration policies between the two countries create a natural experiment in social cohesion that goes unexplored in this book.

Another issue not addressed is how the changing family structure in Canada is affecting their social cohesion. Canadians marry less often than do Americans, but they live in common-law unions much more. In fact, Quebec is now tied with Sweden for the highest percentage of common-law unions in the world. These long-term common-law unions, which often include children, do not last as long on average as marriages. What effects do common-law unions have on social cohesion? Do common-law parents stay as involved with their children after a separation as do divorced parents? What about economic success? These are questions that will have to wait for the sequel to this book.

The title of the book is more ambitious than the individual chapters, and as with all collections, the chapters are uneven. It is frustrating that the science is still at the correlation stage of conclusions. But the chapters raise a number of important issues that will have to be addressed by subsequent work. Given that policymakers in many countries are realizing that nation-building is the hardest job they will ever have, their staffs need to read this book for insights on why it is so frustrating.