During the past few decades, a growing amount of mental real estate has been devoted to discussing art and science, and the level of attention increased markedly in 2009 as we marked the 50th anniversary of C. P. Snow’s influential lecture The Two Cultures, the 150th anniversary of the publication of The Origin of Species, and Darwin’s 200th birthday. Innumerable conferences, symposia, and festivals celebrated not only Darwin’s science but the links between his thinking and literature, the arts, and popular culture. We have examined under a microscope every aspect of the social, political, cultural, ethical, and visual environment surrounding the forefather of modern biology in order to better understand his work as well as his humanity. The cumulative result of this exploration is reflected in the insights found in Imagining Science: Art, Science, and Social Change. 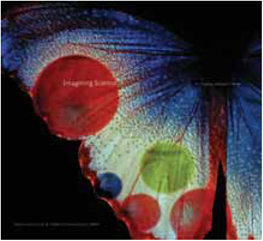 As Curtis Gillespie suggests in the foreword to the book, once you crack open the topic and dig around, the range of ideas and perspectives on the world are amazingly vast. It’s the consensus of most scientists that bioscience is to the 21st century what the field of physics was to the 20th century. If our fundamental understanding of nature has altered that much, how can that thought not have a significant ripple effect in every other field of study or critical thought? Combine that with technological advances and you have a wealth of things to think about. Artists love this stuff, philosophers live for it, and ethicists, lawyers, and policymakers have no choice but to face it.

“THE ABILITY TO IMAGINE SCIENCE THROUGH ART ALLOWS THE READER TO EXPLORE FEELINGS OF ANXIETY, FEAR OR UNCERTAINTY THROUGH VISUALLANGUAGE,” SAYS SEAN CAULFIELD.

Imagining Science is a collection of essays and visuals by artists, scientists, and social commentators that “explore the complex legal, ethical, social, and aesthetic concerns about advances in biotechnology, such as stem cell research, cloning, and genetic testing.” The editors are brothers, Sean and Timothy Caulfield, who seem almost by birthright to be perfectly suited for this task. Sean is a printmaker and Canada Research Chair and professor of printmaking in the Department of Art and Design at the University of Alberta. Timothy is the research director of the Health Law Institute, a professor in the Faculty of Law and the School of Public Health at the University of Alberta, and a senior health scholar with the Alberta Heritage Foundation for Medical Research. Their combined expertise guided their excellent selection of contributors to provide a thoughtful and accurate mapping of the larger conversation about bioscience, technology, art, and social concerns.

“The ability to imagine science through art allows the reader to explore feelings of anxiety, fear or uncertainty through visual language,” says Sean Caulfield. “It is crucial that thinkers from a variety of disciplines work together in order to ensure that we maintain a broad and open perspective when addressing important issues. As biotechnology continues to challenge our minds, stretch ethical boundaries and reach new limits, it is more important than ever for us to unite our artistic and scientific communities as we continue our quest in understanding and Imagining Science.” This book makes a valuable contribution to that mission.

The essay “Making Art, Making Policy” by law professor Lori Andrews and lawyer, artist, and community activist Joan Abrahamson sets a strong opening tone for the book by providing examples of how art and literature have directly affected policymaking. They suggest that “an alternative way to explore the ethical, legal and social impact of technologies like genetics is to analyze the issues artists predict will arise with the technologies.” The importance of the creative voice is reiterated in Bartha Maria Knoppers’s essay “Policymaking and Poetry,” in which she suggests that the truly personal voice, free of ideology and political maneuvering, “can contribute to the construction of universal principles.” Conrad Brunk, a professor of philosophy and an expert in the ethical aspects of environmental and health risk management, points out that the level of risk deemed acceptable by experts is not always the same as that accepted by the general public. In “The Evocative Image: Art and the Perception of Risk” he states that the artist’s role is to call our attention to the complexity of moral and ethical issues that determine what is “safe” technology.

The essays aim to move beyond simplistic views of science, such as the popular media image of the scientist as a Dr. Frankenstein, a madman driven to take technology to its limits no matter what the ethical and moral concerns. Ethicist Cynthia B. Cohen attempts to dispel myths and raise the awareness of the role that scientists play in the ethical and policy issues raised by stem cell research, human cloning, and the creation of chimeras. In “Half Human, Half Beast?: Creating Chimeras in Stem Cell Research” she points out the leadership role that the science community has taken in self-regulating research in this area. As an artistic counterpoint to these concerns, the work produced by Adam Zaretsky’s Transgenic Pheasant Embryology Art and Science Laboratory at the University of Leiden offers a platform for further discourse on the use of new biological methods. This is one of several programs represented or at least briefly mentioned throughout the book that deal with “wet-work,” or artwork that employs hands-on biotechnological procedures. In fact, the first program to formally train artists in the lab next to science students was founded not very long ago in 2000 at the School of Anatomy and Human Biology at the University of Western Australia. What was known as SymbioticA, now called the Centre of Excellence in Biological Arts, which was originally founded by cell biologist Miranda Grounds, neuroscientist Stuart Bunt, and artist Oron Catts, represents an innovative learning and research environment. As bizarre as this approach to artmaking may seem at first, lawyer and ethicist Hank Greely’s essay “Within You, Without You” addresses the possibility that the biological world is even stranger than our often oversimplified understanding of it. Greely argues that whereas popular views of science tend to strive for clear definitions and structure, art may in fact be better at communicating the true nature of our biological complexities.

Science and art are different epistemologies, and the benefit of the discourse lies in the perception gained from their differences. It’s often a question of exploring the effectiveness or ineffectiveness of the language used. Communication expert Edna Einsiedel’s “Of Ladders, Trees and Webs: Genomic Tales Through Metaphor” suggests that understanding the power of metaphor, the mainstay of artist and writer, may well be the key to understanding the link between popular discourse and scientific thinking. In contrast, Jai Shah’s essay warns of the possible misunderstanding that can arise when metaphors are misinterpreted. Several essays by experts such as geneticist Jim Evans, artist David Garneau, and a joint essay by writer and creative “sci-art” practitioner Anna Hayden and genetic scientist Michael Hayden talk about the inherit problems of comparing art and science. Rather than arguing for the superiority of art or science, they maintain that neither field of exploration is complete without the complement of the other. In “Believing the Impossible” Gail Geller challenges the reader to cultivate a higher tolerance for uncertainty and curiosity. Economist Peter Phillips reminds us that role of the artist has evolved from the time of the Renaissance, when artists relied on the patronage of the elite, to an independent social position with the freedom to criticize.

Imagining Science makes clear that the art/science interface is becoming a productive field of study with a growing group of its own theorists, critics, curators, and historians. To those already entrenched in the debate, Imagining Science offers a fresh perspective, summarizing the hot topics. For the uninitiated, the collection of words and images is an inviting introduction. Although the large format and high-quality images might lead one to treat this volume as a coffee table art book, it would be a mistake to let it gather dust after a quick perusal. It deserves to be read closely and considered carefully. Imagining Science should be a springboard to further exploration of the rich interaction of science with other powerful social forces and institutions.