The Climate Fix: What Scientists and Politicians Won’t Tell You About Global Warming

Energy and innovation were major themes in the 2011 State of the Union Address. Barack Obama called for investment in “clean energy technology” to “create countless new jobs for our people.” The terms “innovate,” “innovative,” or “innovation” occurred 11 times in his speech. The president did not mention “global warming” or “climate change.” 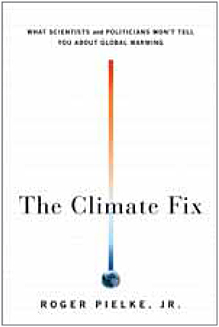 How can the world meet the inexorable increase in demand for energy, which conservative estimates put at 1.5% a year, and not destabilize its climate? Pielke uses nuclear energy to illustrate the magnitude of the problem. To meet the demand for energy and still bring carbon dioxide emissions down by 2050 to half of their 1990 levels, the world would have to put more than 12,000 new nuclear generating stations online, and these would not suffice to make electricity available to the 1.5 billion people who now lack access to it. “How many nuclear power stations is 12,000?” Pielke asks in one of many wonderful visualization exercises. “It is, in round numbers, about the same as one new plant coming online every day between now and 2050.”

Pielke examines currently available technologies that might be used to stabilize the climate and demonstrates that these stabilization “wedges” do not begin to address the problem. According to Pielke, “we simply do not have all the technology to allow for realistic deployment and displacement of existing infrastructure.” Pielke does not expect (although he hopes for) breakthroughs, such as in nuclear fusion, that would lead to fundamentally new sources of power. He believes that enormous progress is possible in lowering the cost of alternatives to fossil fuels, such as wind, solar, biomass, and nuclear, to make them provide abundant sources of inexpensive energy. Technological advance, Pielke argues, is the prerequisite to making progress in decarbonizing the global economy. “The greater the rate of innovation, the greater the potential pace of decarbonization.”

It is a short step conceptually and politically, when one follows the mathematical analyses Pielke provides, from the iron law of climate change to the call for innovation. If innovation does not provide the abundance of energy the world demands, adaptation to climate change becomes inevitable. Pielke advises that we should plan for it: “Effective climate policy will necessarily require a combination of mitigation and adaptation strategies.”

To encourage innovation, Pielke endorses a proposal by Isabel Galiana and Chris Green of McGill University that governments impose a modest carbon tax to raise billions of dollars to subsidize relevant R&D. The point of a small tax is not to change behavior or to restrict economic activity but “to raise revenues for investment in innovation.”

ACCORDING TO PIELKE, “CLIMATE SCIENCE IS TODAY A FULLY POLITICIZED ENTERPRISE, DESPERATELY IN NEED OF REFORM IF INTEGRITY IS TO BE RESTORED AND SUSTAINED.”

The fix is in

The term “fix” in the title of the book can be understood in three different senses. First, Pielke in many graphs, illustrations, and arguments describes the depth of the difficulty we face—the fix we are in. Second, he calls essentially for a technological fix: innovation in energy technology. The most searching and subtle chapters, however, ask whether climate science has been “fixed” in the sense that a boxing match may be fixed. Pielke accepts the central findings of climate science, but he argues that it has lost its honesty and integrity nonetheless. According to Pielke, “Climate science is today a fully politicized enterprise, desperately in need of reform if integrity is to be restored and sustained.”

Pielke bases his indictment on examples he describes in which climate scientists have cherry-picked data, favored interpretations, and downplayed uncertainties in order to create fear, indeed hysteria, in the service of the political programs they advocate, such as the Kyoto Protocol. According to Pielke, leading climate scientists regard climate politics and with it their science as an “us-against-them” Manichean struggle for public opinion. Pielke finds that climate scientists inhibit or punish dissent in their ranks even where uncertainties exist (for example, in the relation between current weather conditions and climatic change), because they regard climate science as “the ground on which battles over climate politics are waged.” These experts, Pielke says, rise to high dudgeon in condemning those they call “deniers,” a term Pielke believes was “coined to evoke comparisons with Holocaust deniers.” Pielke regards what he sees as self-righteous posturing among climate scientists as all the more regrettable because “the battle for public opinion has essentially been won.”

The battle for public opinion has been won in the sense that a “majority of the public has for many years accepted that humans influence the climate system and … has strongly supported action on climate change for at least a decade.” The question is: What action ought to be taken? The “naturalistic fallacy,” the principle that one cannot get an “ought” from an “is,” implies that climate science qua science cannot tell us what we ought to do. Science cannot tell us what to value; for example, how to balance the interests of future generations against our own. Yet according to Pielke, climate scientists present themselves as policy authorities and with other partisans “selectively array bits of science that best support their position.”

There is a lot of common sense in this book. For example, Pielke questions the relevance of the debate over targets: whether the goal for carbon dioxide concentration in the atmosphere should be 450 parts per million (ppm), 350 ppm, or some other level. Choosing a long-term goal is analogous to a middle-aged person deciding whether to aim at a life span of 87.5 or 97.3 years. The goal is not important because the prescription—diet, exercise, visits to the doctor, etc.—is the same. Pielke quotes Myles Allen, an Oxford University climate scientist: “The actions required over the next couple of decades to avoid dangerous climate change are the same regardless of the long-term concentration we decide to aim for.”

According to Pielke, the politicization of climate science has created a bias against adaptation. This is because although climate science can say something about what levels of greenhouse gases will destabilize the climate, it can say nothing about how the world should cope with a destabilized climate. Even if governments set ambitious carbon-reduction goals, they are unlikely to fully meet them. Policies for adaptation are therefore at least as important as policies for mitigation.

If one were to offer a criticism of this book, it might be to ask why Pielke is shocked, shocked that scientists dissemble to create alarm, to offer themselves as saviors, and to increase their funding. In an informative chapter centering on “Climategate,” the leaking of e-mails from the Climate Research Unit of East Anglia University, Pielke castigates the scientists involved for trying to manipulate the peer-review process of scientific publication “by managing and coordinating reviews of individual papers, by putting pressure on journal editors and editorial boards, by seeking to stack editorial boards with like-minded colleagues,” and so on. Pielke quotes a columnist for the Financial Times who commented on the ho-hum response of the scientific establishment: “It said that this is how science is done in the real world.”

This may be how a lot of science is done in the real world. It is hard to identify a policy-relevant science, in particular an environmental science, in which participants have behaved better. The scholars who contested Malthusian predictions in the 1960s and 1970s, when Cassandras confronted the Cornucopians, similarly fought political battles on scientific grounds. Today, social and life scientists engage in a great deal of research to “price” or “valuate” ecosystem “services,” to measure “existence values,” and to quantify “benefits” in order to extract an “ought” from an “is.” It is never easy to distinguish between the political and the empirical in the environmental and other policy-related sciences.

Pielke persuasively argues that the work of climate science, as far as its policy relevance is concerned, is essentially complete because its basic ideas are established. A “commonsense approach to climate policy requires no more agreement on climate science than on such very basic ideas.” The political consensus for pushing technology is plain, as the president made clear in his State of the Union address. The way forward lies not with climate science but with technology, with physics and engineering. How can we innovate, how should we adapt? The great achievement of The Climate Fix is to make the obvious obvious. No small feat in these confused times.