By Christopher B. Leinberger

Urbanism in the Age of Climate Change

There was a stunted debate in Washington and the country in 2009 about climate change that ended the way many debates do these days: with a hung jury and no action. Yet at some point the United States will have to seriously address climate change. As the highest per capita emitter of greenhouse gases (GHGs) by far, the United States must lead on this issue. Time will force action, and the longer policymakers wait, the higher the economic, social, and environmental costs the country and the planet will be forced to bear. 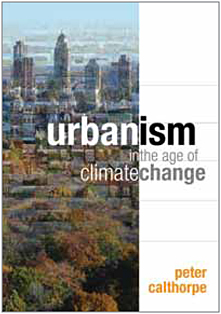 When the debate resumes in earnest, let us hope that the supply-side argument—energy efficiency, renewable energy, and alternative fuels—will not be the dominant thrust. Instead, demand mitigation should be the number-one means by which we will meaningfully address the issue, as Peter Calthorpe compellingly argues in Urbanism in the Age of Climate Change. To quote the immortal Mr. Miyagi in the 1984 movie The Karate Kid, when advising the teenage Daniel on how to avoid being beaten up by his high-school chums: “Best defense, no be there.” The best way of emitting fewer GHGs is by living in a place that does not require the burning of fossil fuels. That is a walkable urban place where nearly all daily trips from home are reached by walking, biking, or short car or transit trips. Although demand mitigation alone will not enable the United States to achieve the required 90% GHG emissions reduction (from the 1990 base) needed by 2050, without demand mitigation, the supply side will be insufficient, as Calthorpe points out.

There has been a crying need for this short, richly illustrated, cogent book to demonstrate the connection between the built environment (buildings and the transportation infrastructure used to travel between those buildings) and energy use and GHG emissions, and Calthorpe is the ideal author. He is the president of an international urban planning firm, one of the founders of the Congress of the New Urbanism, and the author of some of the most important books on architecture and urbanism of the past three decades. These include Sustainable Communities (1986, co-written with Sim Van der Ryn); The Pedestrian Pocket Book (1991, with Doug Kelbaugh), in which he introduced the concept of transit-oriented development; and The Regional City (2001, with Bill Fulton). With his track record of consistently being well ahead of the curve, one can understand why Newsweek named him one of 25 innovators on the cutting edge.

THUS, BRINGING DESTINATIONS CLOSER TOGETHER WHEN DEVELOPING THE BUILT ENVIRONMENT IS A SIMPLER, MORE ELEGANT SOLUTION THAN ASSEMBLING A FLEET OF ELECTRIC CARS AND THE ACRES OF SOLAR COLLECTORS NEED TO POWER THEM.

To solve the climate change challenge, Calthorpe writes, we need to focus on ends, not means. For example, the goal of transportation is access, not movement or mobility; movement is a means, not the end. Thus, bringing destinations closer together when developing the built environment is a simpler, more elegant solution than assembling a fleet of electric cars and the acres of solar collectors needed to power them. Calthorpe calls it “passive urbanism.”

To Calthorpe, where and how we live matters most. The energy use of an average U.S. single-family household (living in a detached home and driving to work) totals just less than 400 million British thermal units per year. If this family bought a hybrid car and weatherized its home, it could cut its energy use by 32%—not bad for what Calthorpe dubs “green sprawl.” In contrast, a typical townhome located in a walkable urban neighborhood (not necessarily in a center city but near transit) without any solar panels or hybrid cars consumes 38% less energy than the green sprawl household. Traditional urbanism, even without green technology, is better than green sprawl. Greening that city townhouse and improving transit options results in 58% less energy use than an average suburban household, Calthorpe calculates. A green in-town condo is even better: 73% less in energy use than the average single-family home in a distant suburb.

Calthorpe argues that a supply side–only approach will not lead us to the most cost-effective, socially rewarding, or environmentally robust solutions. Combining supply-efficiency and demand-mitigation strategies will reduce demand for travel through urbanism, reduce oil consumption through more efficient cars, and reduce electricity use through intelligent building design. New energy sources and technologies, the supply-side approaches, can be deployed in more modest doses, ultimately at less cost.

Calthorpe demonstrates that those who create the built environment have the number-one means of reducing energy use and GHG emissions. “Urbanism is, in fact, our single most potent weapon against climate change, rising energy costs, and environmental degradation,” he writes.

His logic is as follows:

Calthorpe does not stop by making his case for green urbanism; he also demonstrates how green urbanism can be implemented. In doing so, he makes use of his pioneering work in “scenario planning” for metropolitan areas, envisioning how the built environment will evolve over coming decades. It links the many direct and indirect effects of the built environment: land use and conservation, transportation and other infrastructure, water and air pollution, economic growth, net fiscal effects, health, and so on. Calthorpe is currently using the tools he and his colleagues developed to help California implement its own sweeping vision of the future. In my view, metropolitan scenario planning should be the foundation for the next federal transportation bill.

Perhaps the most persuasive example of the value and power of scenario planning is Calthorpe’s work during the past decade in the Salt Lake City metropolitan area. This politically conservative and fast-growing area essentially decided to embrace a green urban future. For example, it has invested in an extensive light rail and commuter rail system. The reason the area chose this path was because the total infrastructure cost would be far lower than for continued sprawl, and economic growth was projected to be greater.