Sleeping with Extra-Terrestrials: The Rise of Irrationalism and Perils of Piety

What are we doing wrong? Or more to the point, what is it we’re not doing? Science, the ultimate product of rational thought, is on a roll: One ancient scourge after another is being eliminated, hunger has been reduced to a political problem, life spans have doubled, all the knowledge of the world has been put at the fingertips of ordinary citizens, and the deepest mysteries of the cosmos are unfolding before our eyes. We are even beginning to get a handle on how to keep our planet healthy. 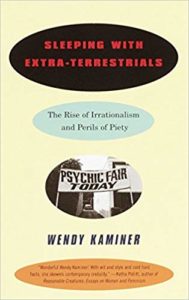 Why then is the public turning away from science? Nay, not just turning away, but fleeing in the opposite direction. My bookcase overflows with wonderful, reductionist accounts of how the world works, written by brilliant scientists for nontechnical audiences–Gould, Dawkins, Sagan, Goodenough–but I look in vain for their names on bestseller lists. Instead, I find such pathetic drivel as Deepak Chopra’s Ageless Body, Timeless Mind: The Quantum Alternative to Growing Old and Harvard psychiatrist John Mack’s Abduction. There is James Van Praagh, Talking to Heaven, while Neale Walsch is having Conversations with God.

How are we to account for such widespread nuttiness? Is it indelibly coded into our DNA? Perhaps. In her latest book, Sleeping with Extra-Terrestrials: The Rise of Irrationalism and Perils of Piety, Wendy Kaminer turns to psychologist James Alcock, who points out that all of us, scientists and professional skeptics included, engage at times in magical thinking. It’s not surprising. Evolution is a slow business. All of recorded history covers a mere 4,000 years, the space age a mere four decades–far too little time to influence our genes. We are all saddled with genes selected for life in a Pleistocene wilderness. In a time before science, there was no gene for scientific thinking, and there still isn’t. It must be learned.

As the physicist Richard Feynman put it, science is what we have learned about how to keep from fooling ourselves. But none of us think scientifically all the time. We instinctively re-create the conditions our memory associates with some rewarding experience, or we avoid the things that surrounded some unpleasant experience. We often find ourselves almost compelled to go through these rituals, even when the higher centers of the brain are telling us that a causal connection is highly implausible. Nor do we bother to test the effectiveness of these rituals. Kaminer, who is not a scientist, makes known on the first page her own indulgence in magical thinking. With characteristic self-deprecating humor, she confesses that she consults a homeopath. She is aware on an intellectual level that this conduct is foolish, and yet she persists in it.

This is the Wendy Kaminer we discovered in I’m Dysfunctional, You’re Dysfunctional: the same clear-eyed, witty insights into the human condition and the same wonderful use of language. She buttresses her arguments with just the right quotes and she constructs dozens of one-liners of her own that deserve to be in Bartlett’s. She is able to take a detached, amused view even of herself. Still, homeopathy is so completely off the wall that I found myself wishing she had chosen a different quirk to make her point.

From faith to foolishness

Sleeping with Extra-Terrestrials is fun, but it is also deeply troubling. In an age of science, we are reminded, irrationalism is raging out of control. Kaminer quotes from polls showing that almost all Americans profess a belief in God, with 76 percent picturing God as a heavenly figure that pays attention to their prayers. Society honors faith. Belief in that which reason denies is associated with steadfastness and courage, whereas skepticism is often identified with cynicism and weak character. That’s pretty hard to fit into a scientific worldview, but few scientists are willing to say so publicly. Kaminer writes: “In this climate of faith in the most ridiculous propositions–with belief in guardian angels commonplace–mocking religion is like burning a flag in an American Legion hall.”

And when you open the door to one supernatural belief, all sorts of demons rush in. Today these demons are most often cloaked in the symbols and language of science. If you attend a conference on cold fusion, for example, you will almost certainly find yourself in a room with people who speak authoritatively on past lives and psychokinesis. Those who are convinced of alien abductions have no problem with accepting homeopathy. They wear their gullibility proudly. Indeed, I sometimes think they have a secret handshake or something that permits them to recognize one another. They gather together to provide reinforcement. “The more limited your understanding of science,” Kaminer tells us, “the more that scientists resemble masters of the occult, and the more that paranormal phenomena seem likely to reflect undiscovered scientific truths . . . A persistent irony of scientific progress is its encouragement of pseudoscientific claims.”

Science begets pseudoscience. That single insight is worth the price of admission to this book. Scientists are eager to tell the public what it’s like on the frontier. We regale them with speculations about parallel universes, quantum teleportation, wormholes through spacetime and 10-dimensional superstrings. But what the nonscientist may be taking away from this is just that the universe is so strange that anything can happen.

This opens the way for New Age gurus to sprinkle their message with words drawn from science. Alternative healers speak of energy, resonance, and balance, but the words have no substance. They lack any definition. Kaminer recounts a talk by Matthew Fox, who is described as a “postmodern theologian,” on “the physics of angels.” Angels, he explains, move at the speed of light, like photons. “People seem to listen intently and very respectfully to Fox’s rambling exposition, although I cannot imagine they can make much sense of it. Reviewing my notes and a transcript of his remarks, I’m struck by his incoherency.”

I recently had the same reaction to a talk by Deepak Chopra on the release of his new book, How to Know God: The Soul’s Journey into the Mystery of Mysteries. He was introduced as treating spirituality with a rigorous scientific approach. The packed, well-to-do dinner audience in the National Press Club listened worshipfully as he explained that, “GOD is not a person but a process.” He paused, and then repeated it for emphasis: “GOD is not a person but a process.” There were literally gasps from the audience as the importance of this message sank in. “The essential nature of this material world is that it is not material,” he continued. “Things must be seen by the eye of the mind and the eye of the soul.” The eye of the soul, it seems, can be explained by quantum nonlocality. It is “unbounded by space or time.” What was he talking about, and why was everyone nodding their heads as if they understood?

In his wonderful 1996 book Conjuring Science, Christopher Toumey complains that science “carelessly allows its meanings and values to be eviscerated when it permits mischief-makers to hijack its symbols for the benefit of other values and meanings.” In the end, Kaminer offers no solutions. My solution would be for everyone to read her book, but I suspect that those most in need of its message will be the least likely to pick it up.