Promises to Keep: Technology, Law, and the Future of Entertainment

Digitization is reshaping industries that are based on copyright, such as music, movies, books, and journals. Although the ramifications of digitization are widespread, the main focus of current interest is in industries such as movies and music that have large audiences.

Not all of the effects of digitization are universally admired. Peer-to-peer downloading of music files has reduced CD sales, and the recording industry, in an action reeking of desperation, has brought thousands of lawsuits against heavy users of file-sharing networks. The U.S. Supreme Court is about to rule on the industry’s attempt to shut down some file-sharing services. Movie producers, worrying that they too will suffer a slide in sales, have made protection against unauthorized copying a key consideration in choosing the next-generation DVD technology. Congress is considering several pieces of legislation attempting to “solve” these problems. 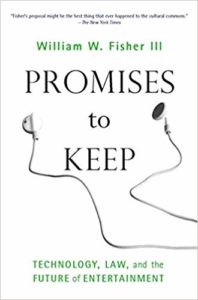 Into this environment strides William W. Fisher III, a copyright expert at Harvard Law School. His book boldly proposes a complete overhaul of the current copyright system. He does not flinch from suggesting concrete changes that he believes will lead not only to a superior copyright regime but also to a healthier society, by increasing what he refers to as “semiotic democracy,” an idea that will be explained below. Fisher’s views are shared by many, though not all, legal theorists, and their arguments are taken seriously in policy debates. Much of this discussion has not caught the attention of other academics or the public at large, so this book performs a valuable service in providing specific proposals for others to examine.

The first part of the book discusses the current copyright system and its many applications in the sound recording and movie industries. Fisher analyzes copyright before 1990 and then explores the difficulties brought about by the growth in digitization in the 1990s. He concludes that the current situation of unbridled pirating and industry lawsuits against file-sharers is untenable.

The entire book is well written, but I particularly recommend the first three chapters, which include a primer on complex nature of copyright in these industries. A lawyer by training, Fisher nevertheless explains many economic concepts used in contemporary analyses of copyright.

The main thrust of the book, presented in chapters 4 to 6, compares three alternative scenarios that he believes will improve the current copyright regime. These three possibilities include measures for strengthening copyright protection, adding regulations to that stronger copyright regime, and finally his favorite alternative: a solution based on government financing.

This crucial portion of the book is considerably weaker than the first chapters. There are numerous minor problems with his economic analysis, but it is his big-picture explication that is most questionable.

In chapter 4, he examines the possibility of increasing copyright protection along the lines of protection for physical property. Unlike owners of physical property, copyright owners are often forced (usually by compulsory licenses) to make their products available at fixed prices (for example, cable retransmission of television broadcasts and jukebox playing of records) or free (such as radio broadcasts of records). Owners of traditional property have far fewer restrictions. Furthermore, criminal sanctions with government enforcement are typical for property theft, whereas copyright sanctions are often civil, and the costs of detection and prosecution are usually paid by the copyright owners.

Fisher analyzes pros and cons of protecting copyright in the way the physical property is protected and concludes that this strengthening of copyright would be “superior to our current state of affairs”— unless manufacturers of electronics goods were required to “recognize and enforce usage restrictions embedded in digital recordings by the owners of the copyrights therein.” In other words, government-mandated technologies (such as the “broadcast flag” intended to limit high-definition copying of high-definition television programs) are so harmful, in his opinion, that they swamp any positive impacts of stronger copyright.

As a libertarian, I sympathize with Fisher’s opposition to government mandates, although such thinking hasn’t won the day in numerous instances such as seatbelts or aspirin-bottle covers. Fisher’s concern, however, is based on something quite different. He fears that these mandates would weaken the “end-to-end”] principle of the Internet (which states that most of the heavy work should be done at the edge of the network, not within the network), a topic that, like semiotic democracy, receives only a few paragraphs and is thus difficult to evaluate. Although Fisher admits that requiring anticopying technology in DVD recorders doesn’t seem to endanger the Internet in the near term, he suggests that in the future it would cause dire harm. He describes this harm in only the vaguest sense, although in a key paragraph he suggests that it will reduce “variety, experimentation, and freedom.” This echoes his description of semiotic democracy, which he declares leads to a “more variegated … stimulating … collaborative and playful” world. The goal of facilitating collaboration and the creative reuse of published materials turns out to be the driving force in his analysis.

In chapter 5, Fisher sketches the outlines of a music industry with stronger copyright but additional government regulation intended to prevent copyright owners from exercising too much control. This is where the values underlying his argument finally start to become clear. For example, he suggests that new forms of price discrimination by copyright owners (charging different consumers different prices for the same product) be regulated because they are “noxious.” Although price discrimination (for example, higher markups on hardcover books than paperbacks and first-run movie prices higher than those for later exhibitions) is common, digital technology might allow copyright owners to price the item far more precisely than they have in the past. For example, a copyright owner could require a consumer to pay each time a recording is played. Economic analysis often suggests that price discrimination would enhance efficiency, particularly if carried out with sufficient precision.

Any seeming inconsistency is resolved once one understands that Fisher envisions two distinct types of creative works: paid and unpaid. Stronger copyright, he believes, will generate too many people wanting to become professional (paid) creators but too few wishing to be amateur (unpaid) creators.

There is also a strong preference in this view for derivative works based on changes to earlier works as opposed to original works. A Jim Carrey movie based on the Dr. Seuss book How the Grinch Stole Christmas is a traditional derivative work, but Fisher appears far more concerned with less commercial derivative works. He provides several examples of derivative works that he believes exemplify semiotic democracy. These include ‘‘mashes” of records, where, for example, the music of one CD is mixed with the vocals of another (the most famous being the “Grey Album” by DJ Dangermouse, which mixed the Beatles “White Album” with the Black Album of rapper JayZ). It also includes rearrangements of movie scenes (try Googling “phantom edit” to discover 8,000 web pages discussing the “improved” version of Starwars: The Phantom Menace, which pales in comparison to the 97,000 pages discussing the “Grey Album”). It appears that semiotic democracy requires broad but thin creativity that can be accomplished in a short time in anyone’s bedroom or study.

Fisher’s final reason for rejecting price discrimination echoes this theme. He fears that those who wish to use or modify someone else’s work will be charged higher prices than are ordinary consumers, and this might deter the creation of derivative works. Again, his concern is about noncommercial use, since the makers of the Grinch movie expected to pay the Seuss estate for the rights.

The more one reads Fisher’s reasons for preferring one policy over another, the more apparent it becomes that the driving force is not a careful weighing of the various economic costs and benefits he presents so meticulously, but an attempt to promote semiotic democracy.

Which brings us to Fisher’s preferred solution. He suggests that we scrap our current system and instead use federal funds to pay creators for their works, which will then be made freely available on the Internet. Taxpayers who do not download movies or music will in effect be subsidizing those who do. The distribution of revenues to creators would be based on surveys of usage, with longer and more popular works receiving greater payments than shorter or less popular works. In this egalitarian world, the tastes of those who care very much about music are to be given no more weight than those who just use music to drown out background noise.

Some parts of this idea are based on the current workings of ASCAP and BMI, the performing rights societies representing composers. A court in New York determines how much total compensation the composers as a group receive from television and radio broadcasters, and the societies distribute the money based on formulas they create, which tend to use length of song as a factor.

The most difficult economic problem with such a system is determining the total amount of money the government should spend on artistic creations. Fisher largely sidesteps how this is to be accomplished. As someone who has testified at performing rights hearings, I can assure you that the process can be quite capricious. But that does not really matter to Fisher.

Remarkably, he states that a “socially optimal output” should be rejected as a goal, because it would “draw an excessively large number of workers into the industry.” This is something of a non sequitur, since “socially optimal” means, well, socially optimal.

After discarding the goal of market efficiency, Fisher suggests replacing it with the goal of a “flourishing entertainment industry.” How would the government office charged with managing intellectual property make this assessment? He states: “If … the industry seemed starved, the office would enrich …if it seemed flush, the office would constrict … the flow of money.” These murky rules are likely to lead to battles between taxpayers and copyright owners that will make our current copyright problems look quaint in comparison.

It is possible that the idea of semiotic democracy might, if fully explained, prove so appealing that readers would agree with his conclusions, but Fisher provides too little detail for readers to judge either the practicality or the desirability of such a world. Is it something worth striving for, or is it merely one in a long list of romanticized Nirvanas, which historically have led to some of the greatest fiascos in humankind’s history? I strongly suspect it is the latter.

Fisher has performed a useful service in describing current copyright problems and laying out some alternative solutions. This alone is a significant achievement. What he has failed to do is provide a basis on which to choose from among those alternatives.