Oppenheimer: Portrait of an Enigma

Imagine spending half a century to write a short book. That’s what Jeremy Bernstein has done, and the wait was worth it. A physics professor and New Yorker writer, Bernstein has watched and studied J. Robert Oppenheimer since the1950s: sitting in his lectures and seminars, riding with him on trains, partying, and picnicking. Bernstein calls this book “the New Yorker profile I never wrote,” and it has that chatty personal style. But it also brims with new stories and scientific explanations, making it an ideal layman’s introduction to this elusive and conflicted 20thcentury giant. 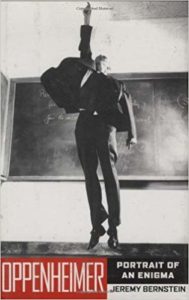 Born in New York in 1904, Oppenheimer grew up in an assimilated Jewish family under the sway of the Ethical Culture Society and its rigorous school. There, nurturing teachers guided him to love literature and poetry but also to discover chemistry and physics, enjoying “the bumpy contingent nature of the way in which you actually find out about something.” He studied chemistry at Harvard, then sailed for England. At Cambridge, Oppenheimer found himself among the pioneers of nuclear physics (including Ernest Rutherford and J. J. Thomson), but without guidance he foundered, missed his supportive family, and suffered an acute nervous breakdown.

His confidence returned when Nobel laureate Max Born, the first theoretical physicist Oppenheimer came to know, invited him to study at Göttingen. As Oppenheimer wrote his Ph.D. thesis there (on the treatment of molecules in quantum mechanics), Born found him to be brilliant but also “conscious of his superiority in a way which was embarrassing and led to trouble.” At seminars, Oppenheimer interrupted any speaker, including Born himself. Back at Harvard as a fellow, Oppenheimer bent his energies to writing poetry. But at last, he found his calling in 1929 when the University of California, Berkeley, hired him to create a new school of theoretical physics.

At Berkeley, Oppenheimer attracted talented students and professors in a creative circle. Many graduate students adored him, some even imitating his awkward gait. Colleagues, too, found him engaging despite his sometimes opaque phrases, eccentric mannerisms, poetic recitations in rare languages, and rudely aggressive intellect. For all his haughty and mysterious behavior, Oppenheimer could still be charming; especially when mixing and sipping martinis. As physicist Wolfgang Pauli once put it, Oppenheimer was a psychiatrist by vocation and a physicist by avocation.

Oppenheimer claimed to have no interest in politics, but his social relationships with campus Communists during the 1930s led him to support their causes, especially during the Spanish Civil War. Nevertheless, when General Leslie Groves went looking for someone to direct the Manhattan Project site at Los Alamos to actually make a nuclear weapon, he was so impressed by Oppenheimer’s driving ambition that he overlooked his political associations and minimal administrative experience. Although he lacked the Nobel certification held by many of his distinguished and headstrong colleagues, Oppenheimer proved himself an inspiring leader, whose eclectic team achieved its daunting task of designing and building an atomic bomb before World War II ended.

After the war, Oppenheimer served as a valued counsel to Washington policymakers and the U.S. Atomic Energy Commission (AEC), heading its influential General Advisory Committee. In 1947, he became director of the Institute for Advanced Study in Princeton, traditionally a haven for physical scientists, including Albert Einstein. Oppenheimer changed that soon after his appointment by inviting one of his favorite poets, T. S. Eliot, for a visit. Eliot wrote a play, The Cocktail Party, during his time at the institute. Oppenheimer changed the physical environment as well, adding comfortable housing and even selecting the avant-garde furnishings.

Eventually Oppenheimer’s early political associations caused him trouble, mainly because he was so devious about them. He lied to Army security officials about trivial incidents and contacts, in part to protect his brother Frank, who was a Communist Party member. His leftish politics, which seemed more extreme because of his deceptions, made Oppenheimer an ideal target for jealous and suspicious enemies on the right, who ultimately managed to destroy his career. Oppenheimer died of throat cancer in 1967, defeated and dejected.

Bernstein describes the intricate and sometimes duplicitous relationships that Oppenheimer had with Berkeley friends and colleagues. Oppenheimer and the French scholar Haakon Chevalier enjoyed an aesthetic and personal friendship that lasted for years. Yet in “the Chevalier affair,” as it came to be known, Oppenheimer at first shielded and later implicated his friend with a series of changing stories that ultimately linked Chevalier to a Soviet agent’s 1942 attempts to persuade U.S. atom scientists to share military secrets. Chevalier was a Communist Party member in the 1930s but appears to have done no more than warn Oppenheimer about the Soviet approach. Yet by repeatedly misstating what had happened, Oppenheimer turned a casual incident into a self-incriminating subterfuge.

Oppenheimer’s careless disregard for others also led him to falsely betray one of his graduate students, Bernard Peters. In 1943, Oppenheimer told an Army security officer that Peters was a “crazy person,” apparently because he had joined in anti-Nazi riots in Hitler’s Germany, and Oppenheimer also claimed, falsely, that he had done so as a Communist. Then in 1949, in testimony before the House Un-American Activities Committee, Oppenheimer embellished the charges. Challenged by Peters and by two respected peers from Los Alamos, physicists Hans Bethe and Victor Weisskoff, Oppenheimer tried to make amends with a public letter of retraction. But the damage was done.

By emphasizing the “enigma” that Oppenheimer’s life presents to the world, Bernstein reveals how his personal conflicts could make him his own worst enemy. Oppenheimer later admitted to being “an idiot” for lying to security agents about Chevalier. As a member of the Manhattan Project’s Target Committee, he voted to drop A-bombs without warning on Japanese cities, then projected his guilt onto President Truman during a meeting a few months later by confessing that he had blood on his hands. Later in life, Oppenheimer said he thought of writing a play about “The Day That Roosevelt Died,” to question whether President Franklin Roosevelt might have reached some accommodation with the Russians over nuclear weapons had he lived longer.

One of the book’s five chapters describes “The Trial” that Oppenheimer endured when enemies led by physicist Edward Teller and AEC Chairman Lewis Strauss conspired to destroy him. At Los Alamos during World War II, Oppenheimer had sidetracked Teller to study the hydrogen bomb, which Oppenheimer considered impractical at the time and which he later criticized as immoral. Teller, who was a fierce advocate of the hydrogen bomb and refused to work on the wartime A-bomb, resented the way he was treated and later blamed Oppenheimer for delaying the H-bomb. The ambitious and thin-skinned Strauss could never get over an insult Oppenheimer once directed at him during a congressional hearing. Both men were fiercely anti-Communist, loathed Oppenheimer’s more liberal views, and ably exploited the McCarthy era’s fears and suspicions. In the closed-door security hearing Strauss had arranged for Oppenheimer, the rules and the witnesses were stacked against him. His lawyers were barred from using classified material that supported Oppenheimer’s interpretation of events, and conversations with their client were secretly bugged. Through this ordeal, Oppenheimer became a victim resigned to his fate. His security clearance was revoked in 1954, precluding him from high-level government policymaking.

This book’s most personal details come from the two years that Bernstein spent at the Institute for Advanced Study in the late 1950s. Bernstein describes what it was like to endure Oppenheimer ’s “blue glare” of icy hostility and to survive the periodic “confessionals” he held to find out what institute fellows were doing.

Beyond relating personal anecdotes, Bernstein also draws on recent scholarship about Oppenheimer from books by Gregg Herken, Robert S. Norris, and S. S. Schweber, and the Memoirs of Edward Teller. Still, at its heart this is a genial account of Bernstein’s various encounters with his subject, albeit one that focuses on Oppenheimer as scientist. Bernstein the physics professor leads us through several helpful scientific explanations. He shows how Oppenheimer’s early work on quantum mechanical tunneling (or barrier penetration) in the 1920s was later exploited by others, and how his study of gravity in neutron stars during the 1930s would enrich later research on black holes with concepts Bernstein thinks worthy of a Nobel prize. Bernstein gives us one of the most succinct explanations of atomic fission and fusion I have ever read, and he reveals for nonscientists what physicists have found to be so “technically sweet” about the way hydrogen bombs work. Almost in exasperation, Bernstein admits that “with Oppenheimer there is no end to anything.” He finds the man—and his myth—an enduring mystery. In short, there is still plenty of time and material for other scholars and biographers to try to bring this enigmatic genius into focus.