The Life of Feynman

The general public may recall physicist Richard Feynman for his televised demonstration when he was a member of the Presidential Commission on the Space Shuttle Challenger Accident. He dipped a rubber O-ring into a glass of ice water to show how it stiffened and thus could have leaked in the sub-freezing temperatures at the spacecraft’s fatal launch. Students revere Feynman’s widely published lectures, which cleverly explain how science advances through riotous discovery and rigorous discipline. Readers, too, have long enjoyed his spirited books about science and its wonders, with titles such as What Do You Care What Other People Think? and Surely You’re Joking, Mr. Feynman! 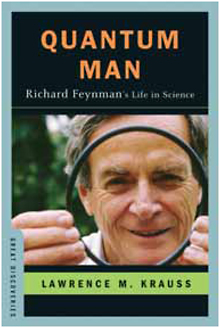 But although Feynman could be lighthearted and amusing when explaining science, he was starkly serious when in its thrall; once enticed by a high-school teacher to study a spin-off of Fermat’s Principle called the “principle of least action,” he was smitten. This principle, which reveals how light waves seek the most direct course through, for example, the barrier between air and water, inspired his own search for simplicity in science. It also helped that Feynman was not only strikingly brilliant at math but also ruthlessly systematic in his concentrated and seemingly hypnotic thought. “Feynman needed to fully understand every problem he encountered by starting from scratch, solving it in his own way and often in several different ways,” writes Lawrence Krauss in this engaging and instructive biography. Through such mental and personal effort, Feynman would advance and alter 20th-century physics in ways that led to a Nobel Prize and, more vital to him, the thrill of discovery. “The prize,” declared Feynman, “is in the pleasure of finding things out.”

Richard Phillips Feynman was born in Queens, New York, in 1918 and emulated both his father’s skepticism of authority and his mother’s sense of humor. He took every physics course offered when an undergraduate at MIT, then earned a physics Ph.D. at Princeton in 1942. When he was hired to work on the Manhattan Project at Los Alamos during World War II, Feynman’s mathematical flair so impressed Theoretical Division Director Hans Bethe that he made him head of the computation group. The two physicists admired and liked each other, beginning their lifelong collaboration with the Bethe-Feynman Formula for calculating the yield of a nuclear bomb. Joining Bethe at Cornell after the war, Feynman labored intensely to apply a new type of calculus he had developed to fundamental puzzles in quantum electrodynamics (QED). He also created “Feynman diagrams,” simple schematic sketches whose lines revealed how subatomic particles behave or how numerical and symbolic formulas appear in space/time.

Feynman shared the 1965 Nobel physics prize with Sin-Itiro Tomonaga and Julian Schwinger for “fundamental work in quantum electrodynamics, with deep-ploughing consequences for the physics of elementary particles.” Krauss here gives us useful perspective on how physicist Freeman Dyson was crucial in Feynman’s career and fame. In 1948 and 1949, Dyson wrote two papers that “as much as anything … provided the window through which Feynman’s ideas could change the way physicists thought about fundamental physics.” Dyson showed that although Tomonaga, Schwinger, and Feynman used different approaches to explain radiation theories in QED, all three ways were equivalent. Further, Dyson concluded, Feynman’s approach was more enlightening and useful for using QED to solve physics problems.

When at Caltech in the 1950s and 1960s, Feynman enjoyed a hyperactive collaboration with future Nobelist Murray Gell-Mann as they studied the “weak interaction” that causes subatomic particles to decay. Krauss, himself a Nobel laureate in physics at Arizona State University, clearly admires Feynman’s brilliant achievements and here uses his life and labors to trace and explain how quantum theory evolved in its many surprising applications: quantum thermodynamics, QED, and most recently, quantum computing. Like Feynman, Krauss also relishes the quirky surprises that science sometimes throws at researchers, recalling his own thrill when first seeing that Feynman’s Nobel work “explained how an antiparticle could be thought of as a particle going backward in time.” That’s right, backward and forward in time, with just the bouncy perspective Feynman personified.

In contrast to his brilliant scientific career, Feynman’s personal life was mostly tragic and troubled. After just three years of marriage to his beloved high-school sweetheart, she died of tuberculosis in 1945, a month before the A-bomb he had helped create was first exploded. Her death tipped him into years of nihilism and depression; although, as Bethe remarked, “Feynman depressed is just a little more cheerful than any other person when he is exuberant.” Feynman’s partying and womanizing included affairs with many faculty colleagues’ wives at Cornell and Caltech as well as a sabbatical in Brazil where he drummed in samba bands and calculated a set of simple rules for seducing women in bars. His second marriage in 1952, to a flame he had met at Cornell, soon ended because, as she complained during the divorce proceedings, “He begins working calculus problems in his head as soon as he awakens. He did calculus while driving his car, while sitting in the living room, and while lying in bed at night.”

Yet from this emotional turmoil came—at last—a gentle and stable life. Feynman was romancing two married women in 1958 when, at a conference in Geneva, he met a 24-year-old English au pair and wooed her away from two boyfriends to California as his live-in maid. The two eventually married, raised two children, and lived together happily in Pasadena until his death from cancer in 1988.

Ever the contrarian, Feynman was elected a member of the National Academy of Sciences (NAS) in the 1950s but then spent a decade trying to resign because, he complained, the NAS unfairly decided which scientists were “in.” He worked day and night at his science but often found the most creative settings for his calculations to be topless bars and strip joints. In their on-and-off collaborations, Gell-Mann once complained that Feynman spent his time “generating anecdotes about himself,” and even Krauss’s account of his scientific life reveals histrionic and egotistical episodes. Krauss’s only doubt about his subject’s achievements concerns his compulsion to derive proofs by himself, suggesting that had Feynman been a better collaborator, the brainstorming could have produced even more splendid discoveries.

On a personal level, Feynman gladly spent hours listening to students and colleagues as they presented their research results. Yet, like his idol the Austrian theoretical physicist Wolfgang Pauli, Feynman could also be curt and critical. Pauli is remembered for his put-down of a bad science paper as being “not even wrong,” and Feynman once groused, “I have only to explain the regularities of nature; I don’t have to explain the methods of my friends.” Feynman voiced his impatience with “string theory” by complaining that instead of being a theory of “everything,” as it aspired to be, it had become a theory of “anything” that could not be verified experimentally. “String theorists don’t make predictions, they make excuses!”

Feynman desperately sought to discover a law or theorem as true and useful as Pauli’s quantum-mechanical Exclusion Principle (explaining the behavior of subatomic particles) and eventually said that his own ideas were useful but not profound. Krauss disagrees, asserting that although Feynman was a “showman” among colleagues and with wider audiences, he nevertheless became “perhaps the greatest, and probably the most beloved, physicist of the last half of the 20th century.” A grand claim, to be sure, but one Krauss demonstrates with examples showing just how Feynman influenced and inspired contemporary and later colleagues. Here we learn that in a 1959 lecture Feynman outlined the new field now called nanotechnology, predicting how records could be stored on pinhead-sized surfaces, biologists could manipulate life on the molecular and even atomic scale, and nanomachines could run on the rules of quantum mechanics. By 1981, Feynman was thinking “deeply about the theoretical foundations of computing itself,” Krauss writes, seeking a computer that was quantum-mechanical in nature.

As the author of several books about science, Krauss is a clear writer who shares Feynman’s sense of wonder. But while skillfully explaining Feynman’s science in the expanding field of quantum physics, Krauss too often skips among decades and concepts without reminding readers just when and where they are. Some confusion can be overcome by using the book’s detailed index, but had Krauss just added dates to the text more often, this would have made for an easier read. Perhaps, Krauss could have drawn Feynman diagrams to trace the paths of modern physics? This distraction aside, Krauss has brought to life a marvelous genius whose energy and insights shaped our understanding of the world—in ways both profound and fun.