Meeting the Demands of Reason: The Life and Thought of Andrei Sakharov

Andrei Sakharov is widely remembered today for two things. As a physicist, he helped create the Soviet Union’s first and biggest thermonuclear weapons, and as a political dissident, he received the Nobel Peace Prize for advancing “human rights” and nuclear disarmament. 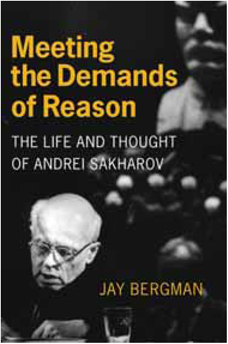 Beyond the H-bomb’s glare and the prize’s glory was a modest, often eccentric man who comes alive in this authoritative and engaging biography as someone beset by intense intellectual passions and shadowed by a Soviet government that first celebrated his genius, then tried to crush his spirit. An often-lonely soul who personified the powers of abstract reason and individual courage, Sakharov believed that scientists must bear social responsibility for their discoveries and risked his health and his life in that cause.

Jay Bergman, a history professor at Central Connecticut State University who has specialized in research about Russian intellectual life, has sought to discover and explain Sakharov’s scientific and personal thoughts in a detailed and compelling analysis. His book joins other revealing works, including On Sakharov (1982) by Alexander Babyonyshev, Andrei Sakharov and Peace (1985) by Edward Lozansky, Sakharov’s own Memoirs (1990), Sakharov Remembered (1991) edited by Sidney Drell and Sergei Kapitsa, and The World of Andrei Sakharov (2005) by Gennady Gorelik with Antonina Bouis.

But Bergman’s special achievement is to have meticulously traced and chronicled Sakharov’s thinking both as a scientist and as a man of conscience, documenting from letters, interviews, official files, and diverse press and journal articles the incremental ideas that led him to brilliant physics and then to sacrificial public activism. In Bergman’s view, Sakharov personified the “moral wholeness” that was pervasive among the Russian intelligentsia, “the belief that the moral principles a person espouses must be applied to every aspect of his life.”

Andrei Dmitrievich Sakharov was born in Moscow in 1921, the son of a physics teacher and popular science writer. His family circle was rich in culture and ideas, and after being tutored at home, young Sakharov went on to study physics at Moscow State University, graduating with distinction in 1942. Afterward, amid practical engineering tasks at a munitions factory near the battlefront, he managed to write articles about theoretical physics, and in 1945 began study for a doctorate at the Lebedev Institute of the USSR Academy of Sciences under the theoretical physicist Igor Tamm (a Nobel laureate in physics in 1958).

In 1948, a year after Sakharov de fended his thesis, Tamm recruited him to begin work on developing thermonuclear (fusion) weapons, first in Moscow, then at Arzamas-16 (Sarov), a remote secret city. There he designed H-bombs with novel concepts that rivaled U.S. efforts, including in 1961 the Tsar Bomba, at 50 megatons the largest ever exploded. He also designed a controlled nuclear fusion reactor called Tokomak, and he explored theoretical physics with insights about matter and antimatter.

Life at Sarov was intellectually stimulating, and the scientists freely discussed Western ideas and politics. Success led to his 1952 election to the Soviet Academy of Sciences as its youngest member, an honor that was accompanied by a chauffeured car, a comfortable apartment in Moscow, and a dacha in the countryside. This life Sakharov embraced and enjoyed, believing that his science contributed to world peace by allowing the Soviet Union to achieve nuclear parity with the United States.

Influenced by the protests of Albert Schweitzer and Linus Pauling against the radioactive contamination from weapons tests, he tried first to limit their fallout and then to end them, an effort that helped lead to the 1963 Partial Test Ban Treaty. By then, his moral perspectives had shifted. Espousing an “open society, convergence, and world government,” he wrote in his Memoirs, “I shared the hopes of Einstein, Bohr, Russell, Szilard, and other Western intellectuals that these notions, which had gained currency after World War II, might ease the tragic crisis of our age.” Especially important to Sakharov, and heretical to Soviet leaders, was his hope for a “convergence” of communism and capitalism that might end world tensions and yield harmonious prosperity.

Bergman concludes that “Sakharov came to understand the integral relationship between science and society. Consequently, he began trying to foster in other scientists the view that science should be a liberating force morally as well as technologically and that it should benefit not just the abstract interests of governments but the human beings these governments exist to serve.” (This Bergman contrasts with the religious fervor of another renowned Soviet critic, the writer and Nobel laureate Alexander Solzhenitsyn.)

Rebuffed, even publicly ridiculed, by Khrushchev and other officials, Sakharov grew more defiant. By the mid-1960s, he was disillusioned by the leaders he came to know and by the Soviet system’s inequity and cruelty. Sakharov’s first overt dissent came in 1966 when he signed a group letter condemning a Communist Party resolution to rehabilitate Stalin. He quickly progressed to sending Kremlin leaders more pointed letters, signing petitions, and sending telegrams. By year’s end, Sakharov attended his first public demonstration honoring political prisoners whose rights were being violated. He wrote to Leonid Brezhnev in 1967, complaining about a political trial he considered unjust, and for this he was demoted at Sarov. But Sakharov believed scientists must have a social conscience and kept at it, telephoning Brezhnev to warn about the industrial pollution of Lake Baikal and drafting a memo to the Central Committee favoring an anti–ballistic missile treaty, which the United States and the USSR eventually signed in 1972.

A decisive act occurred in the spring of 1968 when as Sakharov listened to Western radio reports of nonviolent protests in Czechoslovakia, he penned a soul-searching essay, “Reflections on Progress, Peaceful Coexistence, and Intellectual Freedom.” This he sent to Brezhnev (who already had a copy from the KGB) and then released it to Western journalists. “Reflections” appeared in The New York Times and was published in 65 editions in 17 languages. For this, Sakharov promptly lost his security clearance, ending his weapons work at Sarov. He returned to the Lebedev Institute in Moscow to pursue pure science, though at a salary cut from 24,000 to 4,200 rubles a year.

Sakharov believed that “human rights” were fundamental to all people and called attention to violations in the Soviet Union by attending political trials. KGB agents began to follow him more aggressively, open and alter his mail, and cut his telephone lines. Beginning in 1972, Sakharov called for granting blanket amnesty to all political prisoners in labor camps and psychiatric hospitals and for abolishing the death penalty. He spoke out for ethnic and religious dissidents, often attending their trials. And in a private memorandum to Brezhnev that was later released, Sakharov proposed many reforms, among them an end to internal passports and the jamming of foreign radio broadcasts as well as the introduction of new measures to curb environmental pollution. The memo’s postscript went further, calling for a “spiritual regeneration” of the country. In interviews Sakharov urged creating a multiparty system of government, for which TASS the Soviet news agency dubbed him “A Purveyor of Libel.” Next he was threatened with legal actions, which he ignored. On the fifth anniversary of the 1968 Warsaw Pact invasion of Czechoslovakia, he held a press conference to denounce this event, which led to three weeks of attacks in the government-sponsored press.

State retribution might have been harsher, but Sakharov benefited from the détente that had softened U.S.Soviet relations, and he rejoiced when radio jamming was ended for the first time since World War II. Becoming bolder, Sakharov timed a hunger strike with a state visit by U.S. President Richard Nixon in 1974, and he gained new justification for his demands when the USSR signed the Helsinki Accords in 1975, which advocated human rights and self-determination for all peoples.

Sakharov’s life became better and worse in October 1975 when it was announced he would receive the Nobel Prize for Peace: better for his newfound global stature, worse for the revenge Soviet officials continued to impose. They refused to let him leave the country, so his wife, Elena Bonner, went to Oslo to accept the prize. She, too, became a victim of disinformation campaigns, and for the next few years the KGB’s surveillance and harassment increased. Government patience with Sakharov ended in January 1980, when he condemned the Soviet invasion of Afghanistan that had begun the month before. Arrested by the KGB, he was stripped of his state awards (several Lenin and Stalin Prizes, but not Academy membership) and exiled to the closed city of Gorky, where he and Bonner would live for the next seven years.

Bergman’s descriptions of life in Gorky are among the most personal and engaging, detailing petty harassments by the KGB, such as repeated thefts of his draft memoirs, but also describing the life “alone together” that Sakharov and Bonner shared for the first time in their marriage. He had time for fundamental science, exploring topics such as cosmology and string theory.

Still, the years in Gorky were also severe, as Sakharov and Bonner staged hunger strikes that harmed their health and angered vindictive government officials. It was only after Soviet premier Mikhail Gorbachev introduced his more open glasnost and perestroika policies and personally intervened in Sakharov’s case that he and Bonner could return to Moscow. Back in the capital in 1986, Sakharov embraced reform politics. Eventually he learned to be a politician and was elected to the new parliament, where he helped lead the democratic opposition. On December 14, 1989, the day before he was to deliver an important political speech and just weeks after the Berlin Wall fell, Sakharov died in his sleep of a heart attack.

Bergman concludes that Sakharov contributed to the Soviet Union’s collapse both by personifying universal ideals and by pressuring Gorbachev to continue reforms. How much was cause and how much coincidence Bergman isn’t sure, but Sakharov’s role was certainly significant, and in this biography we make intimate acquaintance with a rare and profound genius.