Unquenchable: America’s Water Crisis and What to Do About It

True to his title, in Unquenchable, legal scholar and water expert Robert Glennon describes a cross-section of the nation’s water problems and offers several prescriptions. But Glennon is never dusty and dry; his new book is readable and entertaining. Water experts will find much to learn and admire here, but you won’t have to know much about water concerns to find the book informative, amusing, sometimes alarming, and altogether a good update on the highest-profile water management issues of our times. 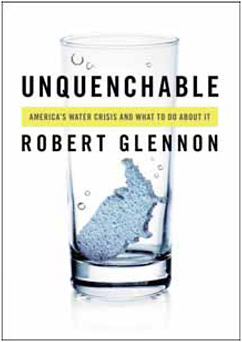 The book’s topic is lack of water, and it focuses on the technical and policy challenges of providing reliable water supplies for three essential but competing interests: the thirst of ever-growing population centers, support for the other life forms that make up our aquatic ecosystems, and the industrial and energy applications undergirding the economy.

The book’s chapters cut a broad swath through many water supply, demand, and quality issues. They include: the human right to water; groundwater contamination and overdraft; the legal system for allocating water rights in the western United States, known as the “prior appropriation doctrine”; the latest plans to transfer water from some parts of the country to others; water reuse; water conservation techniques and practices; combined sewer overflows; privatization; water pricing issues and options; and agricultural uses and new agricultural technologies.

It’s an extensive list, but Unquenchable provides adequate coverage without bogging down in excessive technical detail. Chapters generally are presented as specific case studies that explore fundamental scientific, historical, and legal aspects of water issues in a particular U.S. locale. Glennon’s expertise in water law and administration is apparent in discussions that are relevant and clearly presented. As water resources professionals will attest, water sciences, engineering, and policymaking are replete with thoughtful, creative, and colorful people; the book provides interesting personal descriptions of many of these professionals, augmented nicely with the liberal use of quotes.

With each chapter, the diversity of water problems and the breadth of water management options become increasingly evident. The reader learns about groundwater overdraft in many parts of the country; agriculture-to-urban water transfers in southern California and Utah; and water conservation efforts, or the lack of them, in industry, agriculture, and U.S. households. A particularly striking example is the growth of Las Vegas, the uses of water there, and the many efforts directed at augmenting and conserving its water supply. Even though the city has implemented many conservation schemes, city water officials continue to harbor visions of ambitious water transfer projects, such as the idea of diverting the Mississippi River to the desert Southwest.

An important point that emerges from Unquenchable is that the nation’s water problems are a combination of issues unique to each region’s culture, laws, geology, and hydrology, along with larger, more general water management challenges that are common across the nation. It is not always easy to distinguish between specifically local water issues and the more general ones, but it is necessary to do so if lessons and policies for more beneficial and effective water management are to be identified. Glennon’s efforts to distill broad lessons from his specific case studies and to identify policy options for better water management may be the best parts of the book.

He makes it clear that the nation’s water supply challenges will not be resolved through traditional methods such as building dams, creating reservoirs, channeling rivers, and pumping groundwater. Last century’s approach to water supply development reflected the conventional wisdom and opportunities then. But this is now. With the benefit of hindsight, the experiences of the 20th century—some positive, some negative—have resulted in second thoughts about how best to manage rivers and other water resources. Today, proposals for new dams generate strong opposition; the best dam sites have been used; and many existing reservoirs, such as Lake Powell on the Colorado River, are well below full storage levels. As Glennon states in his introduction, “Business as usual just won’t cut it.”

The book outlines numerous creative water conservation technologies and policies that are helping reduce per-capita use. These conservation measures, whether they be water harvesting or state-of-the-art plumbing fixtures, will be important to the wiser use of water. The book explains that there are instances in which conservation measures clearly represent savings and economic incentives for adoption; for instance, low-flush toilets often pay for themselves in the long run. But in other instances there are barriers to conservation. Proposals for moderate increases in household water prices or changes in rate structures to encourage more efficient use often meet political and social resistance.

The book offers several conservation-related policy and economic solutions in the final chapter, “Blueprint for Reform.” At the same time, Glennon is frank about the limits of conservation. He notes that although many water-stressed communities have implemented ambitious conservation programs, some need to reduce demand even more. He writes, “The reality is that reusing, desalinating, and conserving water may help to alleviate our crisis but will not solve it.”

The book documents many cases where water has been transferred among different uses, typically from lower (e.g., irrigating alfalfa) to higher (e.g., most urban water uses) economic uses. The ingenuity behind some of these exchanges is impressive. Clearly, water transfers will be an important component of future management regimens in the United States, especially in the West.

But Glennon also points out, correctly, that these transfer measures have their limits. For example, agriculture is the largest user of water in the nation, but water used by agriculture is often important for local food production. In addition, the large amounts of water allocated to agriculture are not necessarily easily sold or transferred to municipal and industrial users. That’s because of what Glennon calls “third-party” considerations. An example of these third-party effects would be the negative effects on businesses in a rural farming community if water that supported irrigated agriculture and related businesses, such as farm implement sales, were sold and diverted to urban uses and no longer applied to irrigated agriculture. Another example would be a downstream ecosystem that de pended on stream flows that were diverted when an upstream user sold and diverted water rights to another user. These results can have wide-reaching negative effects for people and ecosystems, and because they may have considerable implications regarding equity, can serve to inhibit water transfers.

One conclusion is that the nation’s policies, laws, and attitudes for allocating and using water resources have their roots in an earlier era. He points out that past practices may not reflect today’s supply, demand, and quality realities. Not only do standard institutional rigidity and inertia make change difficult, but many interest groups benefit from current allocations and arrangements. They contest proposed changes that are not in their favor.

Furthermore, and unfortunately, the nation’s water management apparatus may have taken some backward steps. For instance, the federal Water Resources Council, an interagency group established to facilitate cross-agency dialogue and communication on water management topics, was eliminated from the nation’s budget in 1983 and has not met since. “No effective mechanism currently ensures that the federal agencies work together toward sensible water quality and supply outcomes,” Glennon writes.

Another conclusion is that better management of the nation’s water resources will require shifts in how elected officials and citizens alike think about water. As the book’s introduction states, “Water is a valuable, exhaustible resource, but as Las Vegas did until just a few years ago, we treat it as valueless and inexhaustible.” If the nation is to move to a more sustainable water development path, we will have to purge ourselves of some long-held but wrongheaded beliefs: for example, that water supplies are unlimited; engineers always will find a way to deliver a bountiful supply; and rivers and other water sources have an infinite capacity to accept and assimilate pollutants.

A related theme is that major U.S. economic and social decisions historically have been made with an assumption that water resources would always be able to accommodate additional uses. Regarding water quality, this assumption is reflected in problems of groundwater pollution and estuarine nutrient pollution. Water quality goals often have been trumped by industrial or agricultural production goals. Regarding water supply and demand, a good example is seen in the nation’s population and immigration policies. Unquenchable explains that today’s population growth and immigration policies have the nation on track to add 120 million more people by 2050. This growth would be driven primarily by immigrants and their children and thus represents a conscious federal decision to increase population. The effects of this growth on water demand obviously would, as the book explains, have “immense consequences for our culture, economy, and environment.” Yet such policies are set with little regard for water supply, demand, and quality.

Glennon’s book represents an important contribution to the popular water resources literature and is an excellent overview of contemporary national water supply challenges for expert and novice alike. His call for actions to deal with “America’s water crisis” is divided broadly in two. One level is nuts-and-bolts activities such as more realistic water pricing and policies, better organizational cooperation, and the adoption of new technologies. The other level is more philosophical and cultural. Our water resources base, including aquatic ecosystems and groundwater, will have to be accorded higher value in national policy decisions, he argues, and the limits of our water systems must be better reflected in other sectors. As this book explains, successful changes at both levels are often difficult to accomplish.

There have been other popular and scientific national water policy assessments, and some of Glennon’s policy prescriptions have been offered previously. This is not a criticism. U.S. water history shows that policy perceptions and changes often occur only after a particular finding or recommendation has been driven home for years—or even decades. Unquenchable is upbeat, yet at the same time sends a sobering message. As Glennon observes, national water resources trends show some troubling signs. Substantial policy, economic, and sociocultural changes will be necessary if we are to manage our life-giving water better.