The New Economy: What It Is, How It Happened, and Why It Is Likely to Last

Roger Alcaly’s title overpromises. Despite this, the book contains a useful introduction for a lay reader to a set of topics that academic economists interested in the interaction between high technology and U.S. economic growth have been struggling with over the past decade. 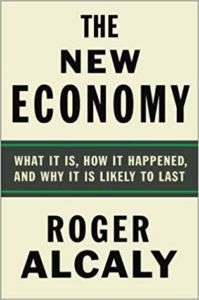 Alcaly, a partner at an investment management firm, argues that the U.S. economy underwent a structural change in the mid-1990s. Linked to the increasing use of information and communication technologies in business, this change pushed the United States permanently onto a faster track of output and productivity growth. The recent travails of the U.S. economy, in his view, although a necessary antidote to the excesses of the late 1990s, are destined to recede as the country resumes its new and faster economic pace.

This thesis basically occupies two of the six substantive chapters of the book. In one of these two chapters, he argues that increases in U.S. productivity growth rates in the latter part of the 1990s—linked to increasing use of computers and communications technology in the economy—are what define the “new economy.” In the second of these chapters, he signs on to the argument that the reason it took almost half a century for the development of modern computer technology to result in a spike in productivity growth is that a certain “critical mass” of technology use is needed in order for a technological revolutions to have a major impact, as users gradually learn how to use the new technology.

In the first of these two chapters, Alcaly does a decent, if incomplete, job of surveying two rapidly growing and somewhat disorderly academic economics literatures that are interrelated. One of those literatures concerns the measurement of prices for high-tech goods and services, whose quality has improved dramatically over time, and where the conventional price indexes constructed by government statistical agencies have lagged badly in tracking these changes. (I should disclose that I am most familiar with and have contributed to this literature.)

The other concerns the measurement of productivity growth rates. So-called “total factor productivity” is calculated by deducting the imputed contributions of inputs to production (such as labor; various kinds of conventional capital goods; high-tech capital goods such as computers, communications, and software; etc.) from growth rates of the output, and the “residual”—the difference between what happened and what you can impute to the impact of growth in the inputs you have measured—is then interpreted as the effect of things you don’t understand well, most notably technology. In recent years, economists (including Dale Jorgenson and Kevin Stiroh in the pages of this publication) have charted a marked increase in total factor productivity growth in the latter part of the 1990s.

The two literatures are related in that recent studies that find an uptick in productivity growth since 1995 make use of new and improved price indexes for high-tech goods such as semiconductors, computers, communications equipment, and software. These new indexes have dramatically changed the historical picture of the U.S. economy painted by government statistics. (Interestingly, Alcaly’s own tables show many periods of productivity growth in the “old economy” roughly equal to or even exceeding the post-1995 surge he identifies with the coming of the new economy.)

A question then arises: If it is computers that are causing the uptick, why did it take so long? Computers, after all, were invented in the 1940s, computer sales have been growing at a rapid rate since the 1950s, and academic studies seem to show computer prices falling at roughly 20 percent annual rates of decline since the early 1950s. Although there is evidence that coincident with the PC boom of the 1980s, those rates of decline in computer prices increased and continued to increase in the 1990s, computer prices have been dropping like a rock since at least the 1950s, while computer sales have been growing rapidly, year after year after year. Why the long delay in increasing productivity growth rates?

In the second of these two chapters, Alcaly seizes on the argument advanced by some economists (notably Paul David, who takes as an analogy the diffusion of electric power in the U.S. economy) that it simply takes a long time for businesses and consumers to learn how to properly exploit new technology. Although this argument is largely an exercise in telling a convincing story consistent with known facts, there is also some empirical support, notably statistical studies showing lags of roughly a decade between computer investments and a measurable increase in productivity growth in particular industries. But the decade of lag suggested by statistical studies is very different from a lag of almost 50 years. The discontinuity in productivity growth in the face of continuously increasing computer investments begs for further explanation. To suggest, as Alcaly (and others) do, that “critical mass” is important simply moves our ignorance to another plane.

Dale Jorgenson has speculated in this publication that the root cause of the productivity resurgence of the 1990s was a sharp acceleration in the rate at which semiconductor prices were declining and the impact of significantly cheaper chips on the chip-consuming computer and communications sectors. This is an attractive explanation, since other studies (my own, for example, with Ana Aizcorbe of the Federal Reserve) suggest that semiconductor price drops accounted for from 40 to 60 percent of price declines in computers in the late 1990s. This acceleration in technological innovation in semiconductors, therefore, resulted in acceleration in computer price declines; and if productivity gains in user industries are associated with rapid technological change, may be an important factor in our recent productivity bonanza.

Alcaly notes the faster rate of decline in semiconductor and computer prices after 1995 and is quick to credit part of the surge in computer investment—and productivity growth—to this source. Unstated is the apparent contradiction between arguing that there is a long lag in realizing the economic impact of new technology but a very quick response to a change in the pace of price decline by businesses making use of that same technology.

Alcaly finishes these two chapters by predicting that the productivity growth increases of the 1990s will continue to be greater than the pre-1995 pace once we emerge from the current economic slowdown. Assuming that the acceleration in semiconductor price declines continues, this seems a safe prediction.

It is best to skip the short history of the semiconductor industry included by Alcaly in this portion of his book, since it adds nothing to existing accounts and includes some notable inaccuracies. For example, he writes that the transistor “did not evolve into the microprocessors that run personal computers until the late 1970s” and that Ted Hoff in 1971 “developed the silicon-etching process that made the microprocessor possible.” The first commercial microprocessor was actually produced in 1971; more sophisticated 8-bit microprocessor designs that were used in early personal computers were shipping by 1974. Hoff gets the credit for realizing that Intel’s manufacturing process (which he did not develop) made it possible to cram enough components on a single chip to produce a complete microprocessor; Hoff’s colleague Federico Faggin led the team responsible for the actual layout and design of that microprocessor Alcaly also gives major play to some provocative but highly speculative theories: Tom Wolfe’s arguments that “small-town” culture in general, and Grinell College in particular, played a major role in the development of the semiconductor industry and that the development of the Visicalc spreadsheet software in the 1970s was “instrumental in launching the takeover wave of the 1980s.” Maybe, but maybe not.

Next, Alcaly includes a puzzling chapter that takes fairly gratuitous shots at John Kenneth Galbraith’s 1967 book The New Industrial State. Galbraith is lambasted as the poster boy for erroneous predictions that the economy was going to evolve into a set of increasingly bureaucratized and oligopolistic industrial firms, rather than the lean, competitive, dynamic players populating the new economy. Short and not particularly good histories of the steel and computer industries are provided as evidence of Galbraith’s failings at prognostication.

The remaining four substantive chapters of the book seem to redefine the new economy to include whatever dominated discussions in business sections of newspapers over the past 15 years. There is a chapter on lean and flexible production systems at Toyota, Dell, and others, and on the importance of new workforce practices. But Toyota practices go back to the 1960s and were imitated by U.S. competitors since at least the 1980s. The connection to a new economy defined around the productivity surge of the late 1990s seems less than clear.

A chapter on the stock market takes us through the speculative bubble of the late 1990s. The resounding claim at the end of this chapter that “it is the development of extraordinary new firms and the above-average rates of productivity and economic growth they help to generate . . . that make economies new” would seem to push the temporal bounds of the new economy back decades, if not centuries.

Next comes a chapter on junk bonds and takeovers, which is one of the most rewarding in the book. The discussion of the interrelated topics of acquisitions and their finance is interesting and insightful. Instead of summarizing the literature of others, in which he has merely dipped his toe, the author is writing about a subject he knows and knows well. Indeed, he mainly skips the academic literature that he relies on earlier in the book. But the connection to the new economy is completely lacking. He makes no attempt to argue that this had anything to do with the recent resurgence in productivity or that it even is new. Indeed, Alcaly notes that junk bonds were widely used in the 1920s (and, I might add, in the 1820s!).

A final chapter on monetary policy says that Alan Greenspan, and before him Paul Volcker, have done atypically good jobs at stimulating economic growth. Quoting Milton Friedman and Ana Schwarz, he attributes their success to superior leadership. Alcaly concludes that the economy reinvented itself in the late 1990s and that the resulting high growth rates are likely to continue in the next century.

In sum, this book would be best consumed as a tapas menu of small appetizers. A carefully selected choice of chapters can make a light but stimulating meal, but avoid the other stuff.